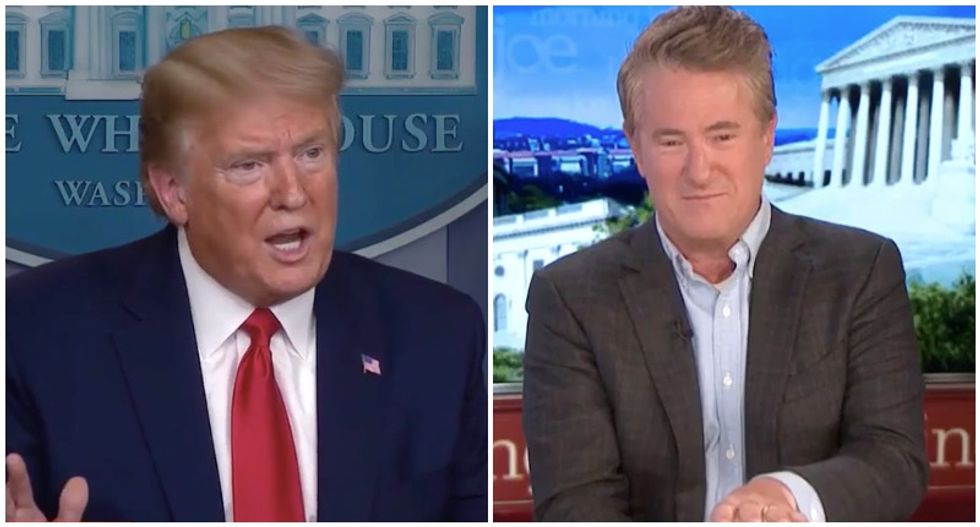 Scarborough had been hammering Trump's claims about coronavirus testing, saying that health experts and government officials had been calling for more since the virus was first detected in the U.S., and the president moaned about it on Twitter.

"Watched the first 5 minutes of poorly rated Morning Psycho on MSDNC just to see if he is as 'nuts' as people are saying," Trump groused. "He’s worse. Such hatred and contempt! I used to do his show all the time before the 2016 election, then cut him off. Wasn’t worth the effort, his mind is shot!"

Scarborough quickly responded, saying that sources close to the president have told him that Trump regularly watches the show.

"Donald, thank you, again, for your support," Scarborough said. "We appreciate you watching, appreciate that, in the middle of a pandemic, you actually have enough time to watch our show and then tweet about it. Yes, this year, the ratings have -- even before this pandemic, the best ever, and we thank you. This is what Donald Trump tweeted. He watches every day, by the way."

"Here you have a guy who is in the middle of a pandemic," Scarborough added. "He can't get out of the mud. Again, every tweet he tweets about us is usually filled with 20 or 30 lies, counted about four or five in that one right there. But he can't get out of his own way. He can't. He can't do the country's bidding."

.@realDonaldTrump since u are watching, can you imagine a president who would allow a pandemic to sweep in on his w… https://t.co/cBobTLs9xS
— Mika Brzezinski (@Mika Brzezinski) 1587464954.0

Scarborough added his own Twitter response during the next commercial break.