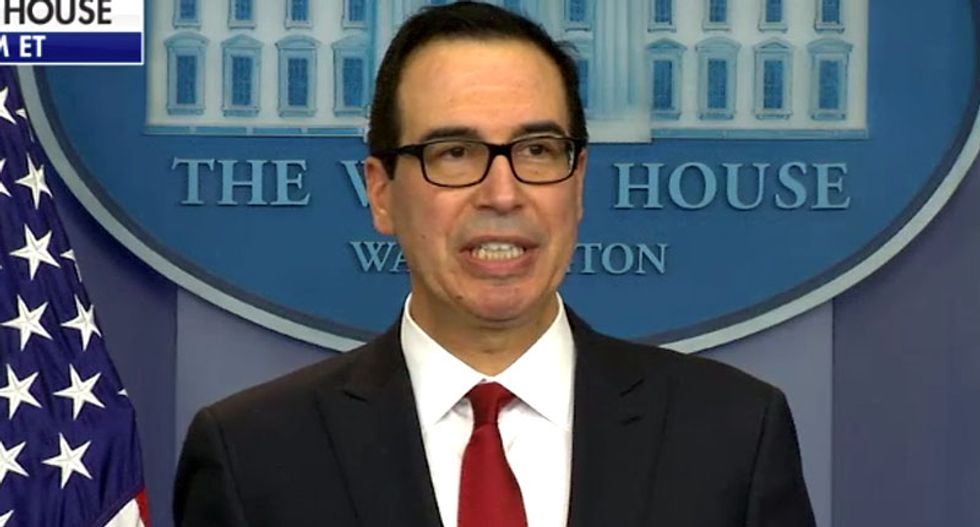 Last week, the United States reported an unprecedented and chart-breaking 3.3 million new unemployment claims as a result of the expanding coronavirus crisis and requisite social distancing. Now, those numbers have jumped once again, as officials announced on Thursday that 6.6 million people filed for unemployment in the week ending on March 28.

These gargantuan levels of need outpace any other economic downturn on record in U.S. history, and horrifyingly, they understate the problem because of all the people out of work who aren’t applying for unemployment. Worse yet, while Congress has passed a massive 2.2 trillion package, known as the CARES Act, meant to soften the blow for families and businesses, it appears the Trump administration may not be up to the challenge of distributing these funds efficiently enough to avoid much of the coming financial pain.

To understand how significant the new unemployment claims are, you need only look at them plotted on graphs (the first shows over 50 years, while the second shows over the past year):

This chart is a portrait of disaster. I have spent the last twenty years studying the labor market and have never s… https://t.co/qT4jsVhr4D
— Heidi Shierholz (@Heidi Shierholz) 1585830821.0

Note: these numbers are cumulative, meaning that counting over the past two weeks, 10 million Americans have newly applied for unemployment benefits. And we expect this number to grow still.

Shierholz, the director of policy at the Economic Policy Institute, noted that this metric doesn’t even cover the entire scale of the damage.

“Today’s UI claims, as extraordinary as they are, leave out many who are out of work due to the virus, including independent contractors, those who don’t have long enough work histories, those who had to quit work to care for a child whose school closed, and on and on,” she explained in a tweet.

Of course, shocking as these figures are, they haven’t exactly caught us off-guard. We knew this was coming and, to some extent, we did it to ourselves via social distancing measures (though these likely reduce the economic damage in the long run, since stopping the virus is key to saving the economy). And Congress passed three phases of coronavirus relief bills, including the 2.2 trillion package meant to stabilize (though not, as has often been misleadingly reported, stimulate) the economy.

But these laws were passed quite quickly. This was arguably justified given the impending nature of the crisis, but it has a cost. Many of the wrinkles and quirks of the legislation haven’t been uncovered or worked out. This problem is compounded by the astounding fact that Congress has gone on vacation until late April after passing the final bill, which will make it harder to pass quick fixes if needed.

And administering the provision of aid at this scale is no easy feat, even when we’re not staring down a world-historical crisis. Unfortunately, not only is the task inherently challenging, it must be handled by the Trump administration, which often fails at the most basic tasks of governance. There’s little reason for confidence in its ability to quickly stanch the economic fallout.

Initially, it looked like the U.S. Treasury Department was making a huge mistake by requiring Social Security beneficiaries who don’t usually file tax returns to submit paperwork in order to obtain the $1,200 check that most Americans will receive as part of the relief bills. Thankfully, it has reversed itself and will send out the money without placing further burdens on this group.

But there are still major apparent flaws in the administration’s plan to hand out the cash. According to a new NBC News report, Americans who get tax refunds from the IRS via direct deposit into their bank accounts can expect to get the $1,200 starting around April 13. But other Americans without their records on file could wait up to almost five months to get their checks in the mail, the report found — which may be long after the money was needed most.

Meanwhile, there’s another major stumbling block that could delay a key line of aid to the country. According to a new Politico report, the administration is not prepared to distribute the funds allocated for small businesses meant to keep employees on the payroll, even if all revenue dries up.

Banks are warning that a $350 billion lending program for struggling small businesses won’t be ready when it launches Friday because the Trump administration has failed to provide them with the necessary guidelines and has set requirements for the loans that are unworkable.

The lenders complain that Treasury Secretary Steven Mnuchin boxed them in with an unrealistic deadline and that the ground rules they’ve been given for the program, which is intended to deliver rapid aid to a huge number of ailing businesses, could delay the assistance for weeks or longer.

The banks, which will be responsible for processing loan applications and doling out money, are expecting millions of applications from businesses. Some fear a disaster that could dwarf the failed kickoff of the Obamacare enrollment web site in 2013.

There is another key form of aid that hopefully should be able get out to people: unemployment insurance. Congress boosted the weekly allotment paid out by state’s uninsurance programs by $600 and it extended the period of time unemployed people will be eligible to receive benefits. The biggest stumbling block here is that states’ systems might become overwhelmed by applications for unemployment, which, as we’ve seen, are coming in at record-breaking rates.

“So, as I understand it, the two key disaster-relief provisions of the CARES Act — enhanced unemployment benefits and small-business loans — aren’t likely to be operational for weeks, due to lack of administrative capacity, even though we’ve already lost 10 million jobs,” said economist Paul Krugman on Twitter. “This cries out for a crash effort, led by experts, to clear up the bottlenecks — sort of like the effort that rescued healthcare.gov when Obamacare launched. But while I’d like to be proved wrong, hard to see Trump admin doing this.”

He added: “After all, even if it did create such a task force, Trump would surely put Jared Kushner in charge.”

Krugman also warned that, despite the fact that many are hoping the economy will bounce back once the coronavirus subsides, there’s good reason to be doubtful on this scenario. Most notable is the impact state budgets are facing without substantial support from the federal government.

“First, the checks sent out by the CARES Act are one-time only, and expanded unemployment benefits expire after four months,” he said. “Second, state and local governments are under severe financial strain. They’ll have to keep spending during the medical crisis, but will have to raise taxes and/or slash spending to make up that later unless they get a lot more federal aid.”

“So we’re going to be experiencing a major fiscal contraction just as the direct hit from the coronavirus diminishes. This could really slow the recovery,” he concluded.