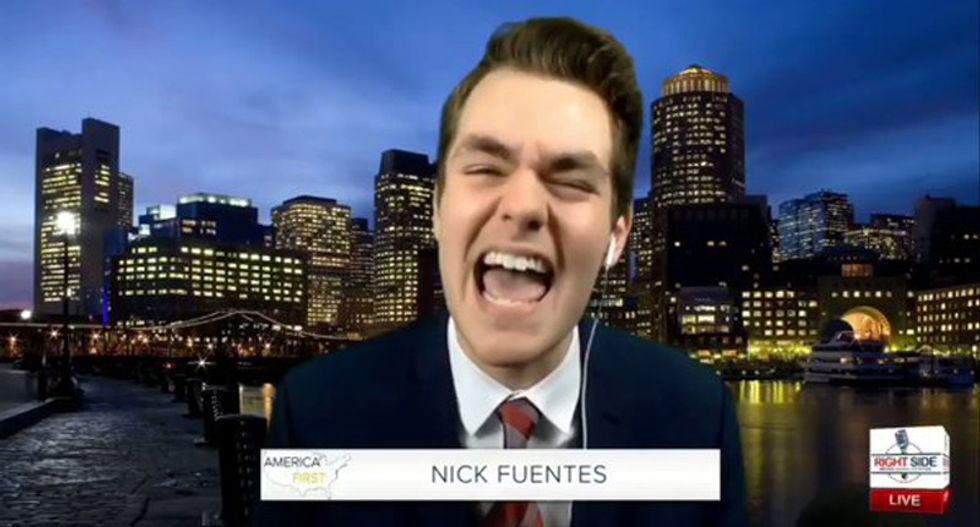 Racists were triggered when TikTok user Gabriella Katharina Huggler called out the alt-right. Followers of far-right commentator Nick Fuentes launched a campaign against her, wrote the DailyDot.

It all began when Huggler commented on one of Fuentes' TikTok videos. Huggler is an influencer with over 70,000 subscribers. Frequently new users will pick fights with such influencers to garner more attention and increase their profile by punching up. Huggler said she was joining an effort with other users making a point about exposing white nationalists.

She wrote that “we as political TikTok needed to come together” over Fuentes joining the site.

Alt-right activists and white nationalists went on the attack, threatening to invade her bedroom and implying they'd murder her. They took it a bit further by attacking Huggler's followers on social media platforms.

"The combination of Huggler being a woman and having a nose piercing—in the eyes of the online trolls—made her an instant target," wrote the Dot. With comments like “Bull-ring” equals “no opinion” and “woman-log off.”

“Maybe you’re projecting a little, so why don’t you take your own advice and log off you alt-right scum,” Huggler shot back.

That's when Fuentes got involved personally, responding to her in a video using Sesame Street character Cookie Monster, which signifies Holocaust denialism after he once used in a baking analogy.

"Huggler says that following her rebuttal she received threatening and harassing messages, which only intensified as Fuentes began mocking her on Twitter and TikTok," the Dot reported. "It spilled over onto other social media sites, such as Instagram and Reddit."

There was a flood of images and memes using Huggler's photo bringing more white nationalists to the digital mob. Threats got more dangerous with increasing threats of harm.

When she did an Instagram Live video, appearing emotional about the incident, the followers of Fuentes generated more memes about her.

Ultimately, after the reporting, Fuentes and right-wing activists Jacob Lloyd and Jaden McNeil were kicked off of TikTok. The onslaught didn't stop, with followers continuing their threats

“We should run electricity through her nose ring,” one comment said. Another said she needed a “self-defense situation at 3 AM through her bedroom window.”

Her home address was posted online and alt-right websites got in on the attacks.

“She is a mediocre e-girl who uses social media to get her daily dopamine fix, nothing more,” one site wrote. “She needs to just shut the hell up, get her ass in the kitchen, and pump out a bunch of white babies for a white man.”

“I think Twitter for me was the scariest part of this ordeal … I’d noticed he’d retweeted memes and some users’ comments on me … The responses to these posts ranged from violent, tone-deaf, to just plain nasty,” Huggler told the Dot.

“I felt like I was being spotlighted for speaking up for myself when someone told me my opinion didn’t matter. I had no idea at the time but whenever I went live, white nationalists would post on Twitter to go raid my live [saying] it was my fault TikTok banned Nick Fuentes, even though that is very far from the truth," she said.

Read the full report at the Daily Dot.