‘You are willing to sacrifice lives’: Fox News host scolds Texas official who says salons are like grocery stores 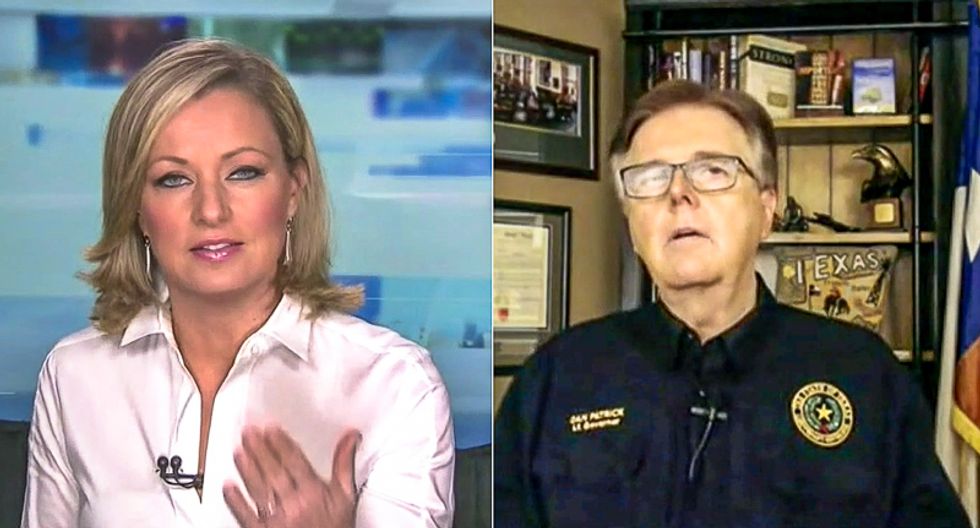 Texas Lt. Gov. Dan Patrick (R) on Tuesday insisted that his remarks about sacrificing senior citizens to reopen the economy were "misreported."

Fox News host Sandra Smith brought up the remarks when she spoke to the Texas official on Tuesday.

"The delicate balance is the younger folks could spread it to the older folks or to the more vulnerable," Smith pointed out. "You are making a reference to comments you made several weeks ago, early in the process, that you were highly criticized for."

"That you in essence were willing to sacrifice some lives to keep the economy going or to at least reopen," the Fox News host added.

"That's not what I said!" Patrick insisted. "I didn't say we're willing to sacrifice lives. And that's what the left has said and spun it. As [Tucker Carlson] has said -- that's where I did the interview -- he said it's not totally taken out of context, but just misreported."

"Could I have artfully said it better? Maybe," he continued. "But everyone knew what I meant. And that's that this is a shared effort by all of us. We have to protect our seniors but we have to open up the economy at the same time."

Patrick then revealed what he called his "watering hole theory."

"Everyone goes to the water hole in the old days or they bring back water to everyone," he opined. "Well, our modern day watering hole, Sandra, is the grocery store. And since day one when this started in America, in Texas, all 29 million of us have been to the grocery store or we live with someone who's come back from the grocery store."

"And we haven't seen this huge outbreak," Patrick argued. "Then, why can't we go to any store?"

Smith interrupted to explain why grocery stores are different from salons.

"We've seen an overwhelming amount of deaths and illnesses in this country," the Fox News host observed. "But the grocery store could be a different scenario, right? Because you can social distance when you walk in the door."

"The point is that salons and spas and barber shops, you can't," she said.

"Sure, you can!" Patrick shot back. "Leave it up to the American people and the American business person to set that up."