'You cannot get an abortion right now in Texas': Federal appeals court upholds ban during pandemic 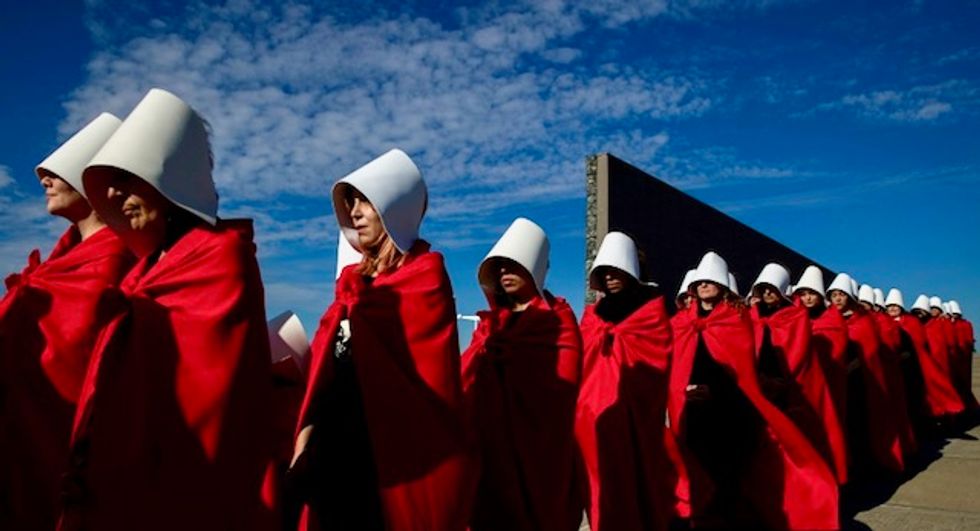 "How cruel and out of touch with reality do you have to be to exploit a global health pandemic to further your own political agenda?"

A federal appeals court on Tuesday upheld Texas Gov. Greg Abbott's executive order banning abortion care during the coronavirus pandemic, making the procedure illegal in most cases in the state for the first time since before Roe vs. Wade was decided by the U.S. Supreme Court in 1973.

Federal judges have overturned similar anti-choice orders in Ohio, Oklahoma, and Alabama. A prior decision rejecting the Texas rule handed down by U.S. District Judge Lee Yeakel late last month was thrown out by the U.S. 5th Circuit Court of Appeals.

As @byKateSmith has been thoroughly reporting: You cannot get an abortion right now in Texas. That has not happened… https://t.co/sIWW9JL6me
— Caitlin Huey-Burns (@Caitlin Huey-Burns) 1586311940.0

Abbott's executive order, announced March 22, classifies abortions as non-essential procedures, which have been cancelled across the country as hospitals confront the coronavirus pandemic. Patients in Texas are currently only permitted to obtain abortion care if their lives or health would be threatened by continuing their pregnancy.

"Governor Abbott's order ensures that hospital beds remain available for coronavirus patients and personal protective equipment reaches the hardworking medical professionals who need it the most during this crisis," Texas Attorney General Ken Paxton said in response to Tuesday's ruling.

The U.S. Supreme Court is expected to weigh in on Abbott's executive order.

Reproductive rights advocates have accused right-wing lawmakers and courts of exploiting the coronavirus crisis to curb abortion rights, arguing that abortion care is usually not provided at hospitals and that providers generally don't need the personal protective equipment (PPE) which is currently being used by doctors and nurses treating coronavius patients.

"How cruel and out of touch with reality do you have to be to exploit a global health pandemic to further your own political agenda?" Dyana Limon-Mercado, executive director of Planned Parenthood Texas Votes, told the Texas Tribune.

Yeakel challenged Abbott's order last month by saying it "prevents Texas women from exercising what the Supreme Court has declared is their fundamental constitutional right," but the 5th Circuit Court of Appeals ruled that constitutional rights can be suspended as the country fights the coronavirus.

"Rights could be reasonably restricted during [a public health crisis]," U.S. Circuit Judge Kyle Duncan said in his opinion.

The ruling and the order are examples of "a state government using the pandemic to violate the individual rights of women to seek abortion and for physicians to provide them," tweeted infectious disease physician Dr. Amesh Adalja.

An example of a state government using the pandemic to violate the individual rights of women to seek abortion and… https://t.co/6PC0qfPweV
— Amesh Adalja (@Amesh Adalja) 1586352435.0

Advocates are concerned that even after the pandemic is over, the restrictions being pushed now could permanently make abortion care harder to access in states across the country. As TIME magazine reported:

Reproductive rights advocates are used to fighting state laws and court battles to preserve abortion access. But this is different. By using executive orders and other emergency measures, a handful of governors and state attorneys general have managed, at least temporarily, to all but shut down legal abortions. Abortion providers say these new restrictions will likely have lasting impacts, not only on the patients in search of abortions, but also on independent abortion clinics’ ability to survive financially in the months ahead.

"The challenges that independent clinics and their patients have had to contend with have not disappeared," Jay Thibodeau, communications director for the Abortion Care Network, told TIME. "Medically unnecessary restrictions on abortion raised enormous barriers before the pandemic and those barriers are becoming increasingly insurmountable now."