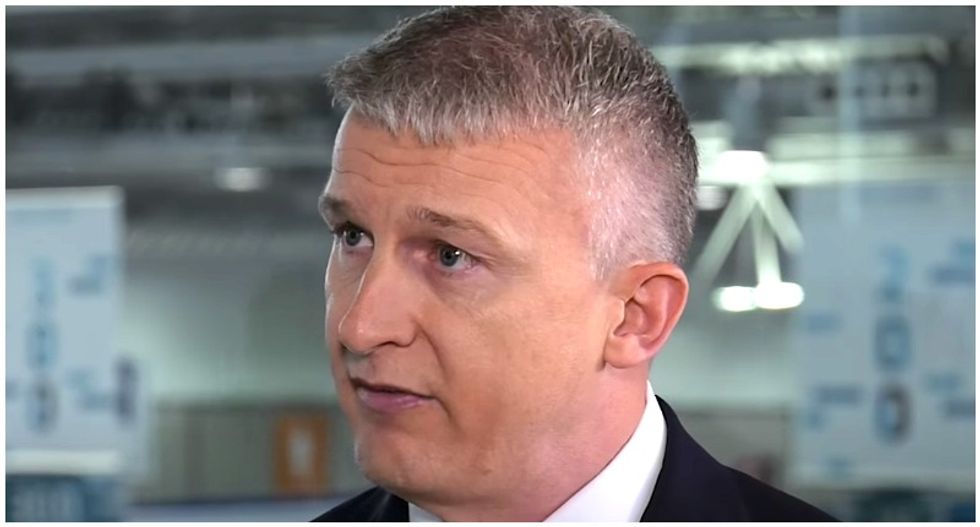 Last November, Rick Bright, then the director of a federal office that approves funding for medical emergencies, sat in on a meeting between his boss and two men — a pharmaceutical and biotech consultant and an Emory University professor — seeking millions of dollars for an unproven drug.

Bright wrote in a whistleblower complaint filed last week that he was wary as professor George Painter and consultant John Clerici described the drug “as a ‘cure all’ for influenza, Ebola, and nearly every other virus.” The team came back in February with an updated pitch after the coronavirus outbreak, suggesting its antiviral medication could be a treatment for COVID-19.

Painter, a pharmacology professor and CEO of a nonprofit biotech company, had already received $30 million from the National Institutes of Health and the Department of Defense for small-scale clinical trials. But as Bright described in his complaint, Painter sought more money from Bright’s office, the Biomedical Advanced Research and Development Authority (BARDA). Instead of going through Bright’s formal application process, Painter and Clerici sought funding through a separate, more “opaque” program created by Bright’s boss, Robert Kadlec — a Trump administration appointee and friend of Painter’s. Kadlec’s program was designed to support products, equipment and technology, Bright said, and lacked the expertise to evaluate drug development.

Bright said Kadlec looked favorably on the proposal from the beginning, but Bright urged caution, as Painter had no data on the drug’s effects in humans. For instance, Bright said he’d noted during the November meeting that other compounds similar to this drug had toxic effects, as the lab animals treated with those chemicals gave birth to offspring that were “born without teeth and without parts of their skulls.”

Bright said Kadlec tried to “circumvent” him to find funding for Painter’s drug, EIDD-2801, though he was ultimately unsuccessful.

Bright is scheduled to testify on Thursday at a House hearing on scientific integrity in the coronavirus response.

In April, Bright was dismissed from BARDA and placed in another government job. He claims the move was retaliation for speaking out against the White House’s response to the virus. Last Friday, the office that handles federal whistleblower cases recommended reinstating Bright to his former position.

A copy of Bright’s scheduled testimony, released Wednesday, did not mention Painter specifically but spoke generally of how officials at the Department of Health and Human Services, the agency that oversees BARDA, dismissed his early warnings to act quickly against the virus. His dismissal, he wrote, was a response to his “insistence that the government invest funding ... into safe and scientifically vetted solutions, and not in drugs, vaccines and other technologies that lack scientific merit.”

“I am testifying today because science — not politics or cronyism — must lead the way to combat this deadly virus,” Bright wrote.

As the complaint makes clear, Bright’s struggles with the Trump administration came after years of conflict with Kadlec. Though the document has received significant attention for Bright’s portrayal of how he resisted the White House’s promotion of an unproven cure for the virus, far less attention has been paid to his claims from 2017-19, during which Bright described at least four instances when Kadlec pressured his staff to judge potential grantees — such as Painter — based more on political connections than scientific merit.

ProPublica contacted HHS for comment on the allegations involving Kadlec, BARDA and the agency at large, but did not receive a response.

Painter did not respond to questions about Bright’s allegations. Laura Diamond, assistant vice president of communications and public affairs at Emory University, said Painter requested funds from BARDA but did not receive them.

Diamond said HHS invited Painter to the 2019 meeting to discuss various drugs being developed by DRIVE, the Emory-based company that Painter runs.

Later, after BARDA began soliciting proposals to deal with the pandemic, Painter submitted a review request following agency protocol, and DRIVE was “one of the first companies selected to present in February to a group of federal agency directors,” Diamond said. Painter’s presentation included a funding request for EIDD-2801, she said, but BARDA has not provided funds.

Painter has a long history with BARDA. In the mid-2000s, when he was CEO of Chimerix, a biotech company, he spoke at congressional hearings urging more government support for biological warfare treatments. At the time, Chimerix was developing a smallpox treatment. Painter supported the legislation that created BARDA in 2006, and his company hired a number of lobbyists to promote smallpox treatments on Capitol Hill.

Clerici, the consultant who accompanied Painter at his recent meetings at BARDA, worked as a Chimerix lobbyist at that time. Chimerix got a $25 million BARDA contract in 2011 for its smallpox drug. Clerici declined to comment.

In 2013, Painter left Chimerix for Emory. He had worked with EIDD-2801 for years but refocused the research in recent months to test it against the coronavirus.

The compound was cleared by the FDA last month to start phase one human trials, the first of several steps to test the drug’s safety and effectiveness. It’s had limited testing against the novel coronavirus: A recent study by 28 scientists (including Painter) found the drug prevents the virus from replicating in cultured human cells.

Timothy Sheahan, the paper’s lead author, said he wasn’t aware of studies on mice or other animals, though he expects similar results since the drug has worked in mice on other coronaviruses.

Sheahan, a University of North Carolina epidemiology professor, said he knew nothing of Painter’s meetings with Kadlec or his attempts to obtain BARDA grants. Sheahan has never applied for or received BARDA funding, he said, and his work on the EIDD-2801 paper was funded by the NIH.

As for Bright’s toxicity concerns, Sheahan said he couldn’t comment without knowing what compound Bright was referring to (the exact chemical wasn’t specified in Bright’s complaint). Compounds with similar structures can have varying effects, he said, and his team isn’t involved with research on the safety of EIDD-2801 for use in humans.

ProPublica sent the paper to a scientist not involved with the study. Katherine Seley-Radtke, a chemistry professor at the University of Maryland, Baltimore County, who does research on antivirals and coronaviruses, said the results are positive but “very preliminary.”

It’s a huge leap to go from testing in cell cultures to testing in humans, she said. Under normal circumstances, the drug would be tested on multiple animals.

Given the urgency of the pandemic, “there seems to be a new rulebook now,” Sheahan said.

Do you have access to information about BARDA that should be public? Email lisa.song@propublica.org. Here’s how to send tips and documents to ProPublica securely.