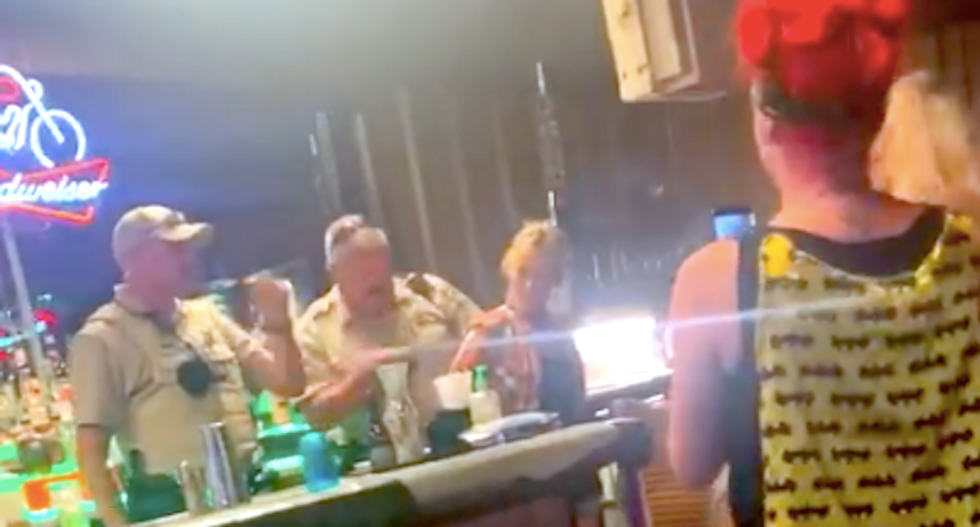 “When we help businesses open up, support them," said Open Texas member and online personal trainer Philip Archibald. "We get them some revenue and we get them back on their feet. We are only going to reopen the country by empowering people and helping them stand up and getting them back off their knees.”

Group members carried military-style rifles, which they claimed were to defend their First Amendment rights, and the bar's owner asked them to stay on her private property behind the bar instead of the business property.

Texas does not allow firearms at bars, and six demonstrators were arrested for carrying a weapon on the bar's premises.

Archibald insists the arrests were illegal because the armed protesters were standing on Ellison's private property, but Ector County Sheriff Mike Griffis said the law applies to property that is owned or connected to the bar.

Ellison said her business was sinking and her employees were struggling, and she complained that she hadn't gotten any assistance from the federal Paycheck Protection Program.

“I think some rights were taken away from us which one of them was like a right to survive," Ellison said. "We have to survive and I think those rights were stripped from us."

She complained that the governor was allowing some nearby gaming businesses to open before her bar, and she contacted Archibald seeking armed support for her demonstration -- but the sheriff didn't appreciate the out-of-town protesters getting involved.

“I understand their side of it,” Griffis said. “Defying the governor’s orders is one thing, but when you bring a bunch of armed vigilantes in from other parts of the state for a show of force, I just got a problem with that,” he said.