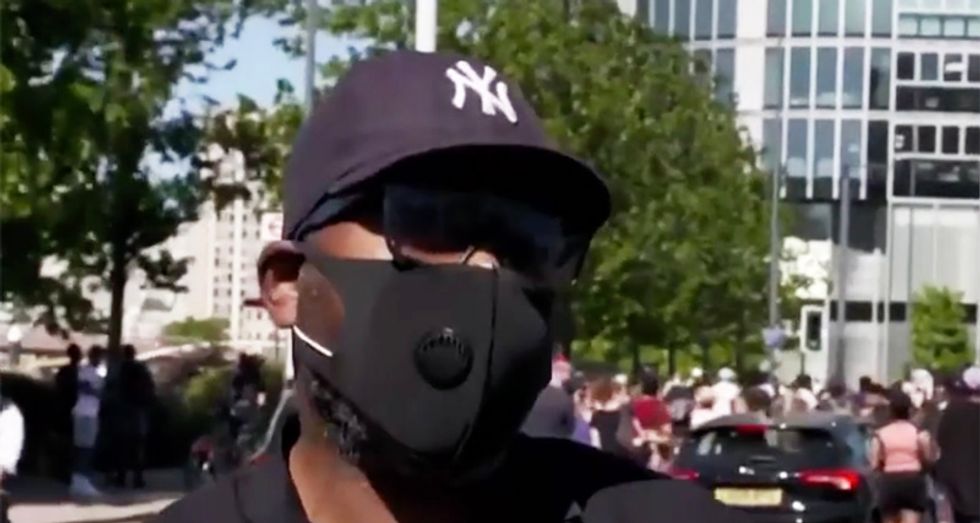 In an interview with MSNBC's Molly Hunter, a Black Londoner explained why he turned out for a protest near Trafalgar Square in support of Americans who have hit the streets in the U.S. over the murder of George Floyd by four former Minneapolis police officers.

According to the man -- identified as Daniel and who was wearing a COVID-19 mask and a New York Yankees hat -- his brother was also murdered by police and the cops walked free.

"You've been marching all day," Hunter began. "Look, I have two questions for you: what was it like watching the U.S. this week from London? Does it resonate?

"It resonates," he replied. "400 years we've been having to deal with this and we're still being lynched and murdered today."

"My brother was shot and killed by the police in this country," he recalled. " He was shot four times in his back and the policemen's evidence when he stood up in court was that my brother was facing him -- the courts accepted that evidence."

"The autopsy shows he has four shots in the back, how can the evidence be accepted?" he continued. "The rules and regulations for England and America are not different -- they are exactly the same."

"To highlight this injustice cannot continue," he exclaimed. "I believe that this is -- this is a different assault, this is a different murder and we can see the protests going on around the world. We have just had enough. Everybody has had enough of these live lynchings. Look at the CNN reporter that got arrested, live on television, where everybody saw exactly what happened."