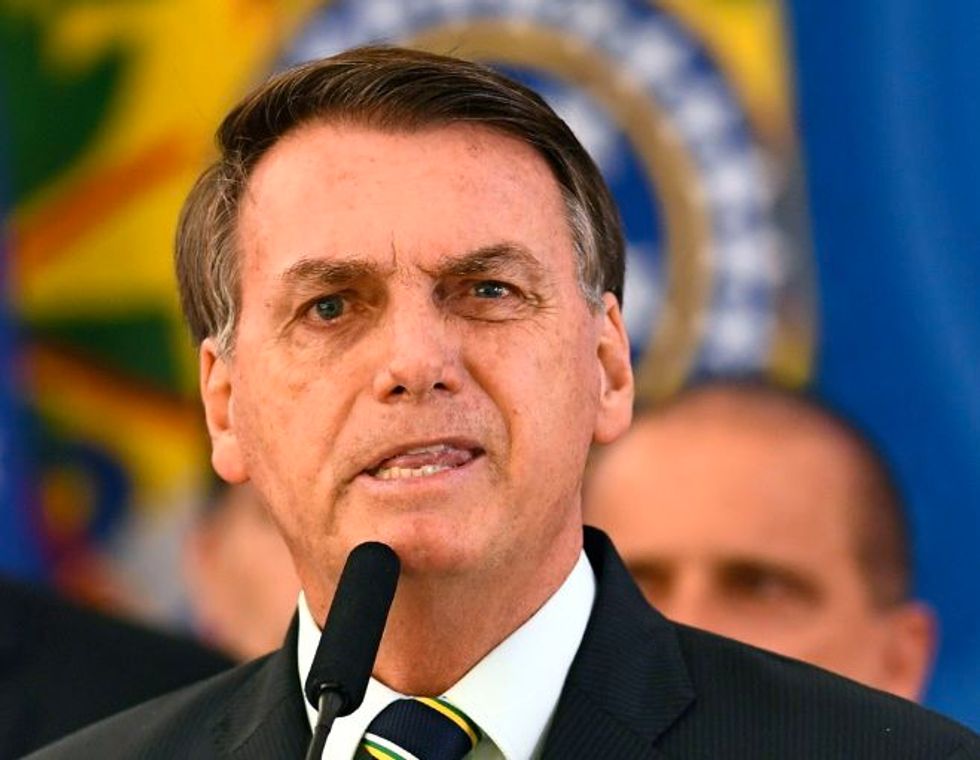 The far-right leader made the remark Tuesday, a day before his government recommended widespread use of chloroquine and a less-toxic derivative, hydroxychloroquine, to treat COVID-19 even in mild cases, despite questions about their safety and effectiveness.

The "Tropical Trump," as Bolsonaro has been called, shares his US counterpart's enthusiasm for the two drugs, as well as his tendency to disregard scientific evidence that contradicts him.

Based on preliminary studies in China and France -- and, apparently, a heavy dose of hope for something other than economically painful lockdowns to contain the pandemic -- Trump and Bolsonaro have been touting chloroquine and hydroxychloroquine as potential wonder drugs against COVID-19, despite scientists' insistence that further testing is needed.

Trump even revealed Monday he has been taking hydroxychloroquine daily as a preventive measure.

But even he has not been able to do what Bolsonaro has done: get national health authorities to expand the recommended use of the drugs from clinical testing and severe cases to the entire infected population, starting with the onset of symptoms.

"There is still no scientific proof, but (chloroquine) is being monitored and used in Brazil and around the world," Bolsonaro tweeted Wednesday.

"We are at war. 'Worse than defeat is the shame of never having fought at all,'" he added.

- Side effects including 'death' -

With Trump up for re-election in November and Bolsonaro left isolated by his minimalist response to the pandemic, the chloroquine debate has turned intensely political.

Bolsonaro's full quote on the matter Tuesday evening was, "Right-wingers take chloroquine, left-wingers take Tubaina" -- the name of a cheap soft drink that happens to rhyme with chloroquine (cloroquina) in Portuguese.

Brazil's former health minister Nelson Teich resigned last week after less than a month on the job, reportedly after clashing with Bolsonaro over the president's insistence on expanding the use of chloroquine against COVID-19.

Political analysts predicted Bolsonaro, now on his third health minister of the pandemic, would seek a pliable replacement willing to ignore the lack of scientific evidence on chloroquine.

Indeed, after interim minister Eduardo Pazuello signed off on the new treatment guidelines, Bolsonaro said he planned to keep him in the post "a very long time."

The new guidelines recommend doctors in the public health system prescribe either chloroquine or hydroxychloroquine from the onset of symptoms of coronavirus infection, together with the antibiotic azithromycin.

Patients will be required to sign a waiver acknowledging they have been informed of potential side effects, including heart and liver dysfunction, retina damage "and even death."

They leave the final decision on using the drugs up to doctors and their patients.

The health ministry acknowledged that "there are still no meta-analyses of randomized, controlled, blind, large-scale clinical trials of these medications in the treatment of COVID-19."

However, it said the government had a responsibility to issue guidelines using the information currently available.

Chloroquine and hydroxychloroquine are typically used against malaria and to treat certain auto-immune diseases, including lupus.

They are both synthetic forms of quinine, which comes from the cinchona tree and has been used to treat malaria for centuries.

There is concern that widespread use of the drugs against coronavirus will create shortages for other patients who need them.

Many pharmacies in Brazil say they have already run out of both drugs.

"Before the pandemic, we sold one box a month, maximum. Then in late March demand started to increase, and now we can't even get it in stock," one pharmacist in Rio de Janeiro told AFP.

Bolsonaro has compared the new coronavirus to a "little flu" and condemned the "hysteria" around it, arguing lockdown measures imposed by state and local authorities will trigger an economic crisis that could cause more death and suffering than the virus itself.

Amid his government's disjointed response, Brazil has emerged as the latest flashpoint in the coronavirus pandemic.

The country has registered more than 270,000 cases and nearly 18,000 deaths so far, and the increase in infections is not expected to peak until June.