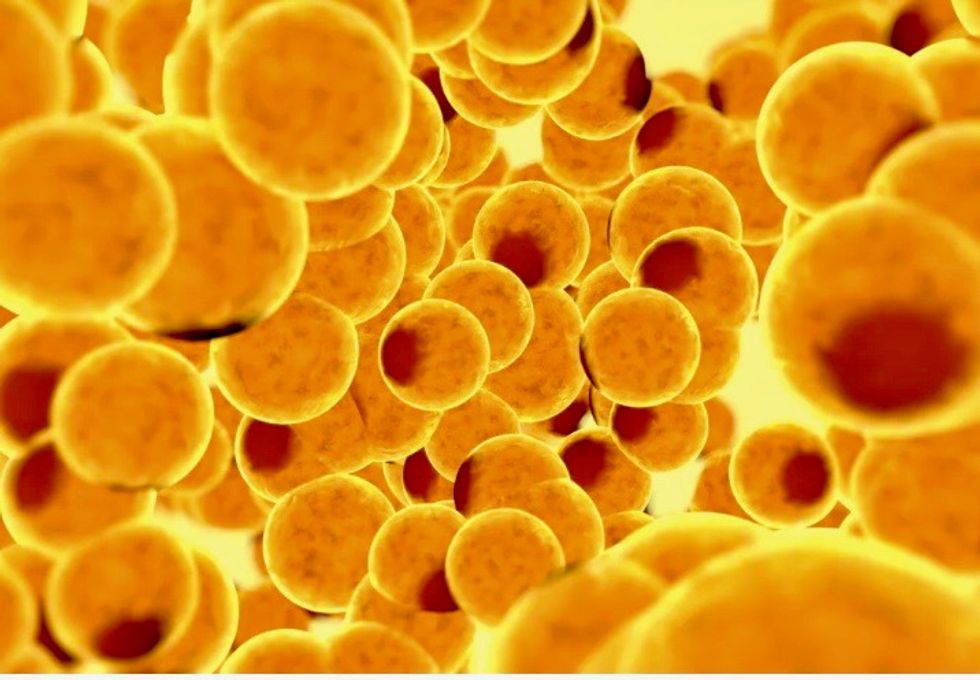 White fat cells are usually found beneath the skin and in the abdominal cavity. Pavel Chagochkin/ Shutterstock

We know that carrying excess fat is bad for us and can contribute to a number of diseases, such as diabetes. But not all fat is created equal.

While certain types of fat cells can accumulate in our bodies and cause health problems, other types have evolved to turn fuel into heat – so they can actually burn calories. Recent research even shows that having higher concentrations of “good” fat cells in our bodies can help us burn more calories when we’re exposed to cold temperatures.

This idea of different “coloured” fats – brown, white and beige – often comes up in fad diets encouraging you to eat special foods for weight loss without much proof they work. But understanding the science behind these different types of fat cells – and how to transform one type into another – really could be an important way to keep healthy, and even treat serious conditions such as obesity.

There are two main types of fat cells.

White fat cells are found in they body’s connective tissues, usually beneath the skin (subcutaneous fat) and in the abdominal cavity (visceral fat).

When we eat food, the white fat cells primarily convert excess energy in the form of glucose that it doesn’t need into lipid droplets, usually as molecules called triglycerides. These produce signalling molecules that regulate appetite and energy balance.

Brown fat cells, on the other hand, were traditionally believed to be found only in newborn babies and would disappear in infancy. Later, research showed that brown fat cells exist in the body throughout your life.

Brown fat cells are located in regions between the shoulder blades, neck, along the spinal cord, and above the collarbone. But they can emerge in other parts of the body such as around the vital organs, where they turn food into heat.

But research has found a third type of fat cells, called beige or “brite” (brown in white) fat cells. These cells act like brown fat cells, but are found in similar areas as white fat cells.

Beige fat cells are derived from white fat in a process called “browning” which is triggered by exposure to low temperatures, typically 3°C above a person’s shivering temperature point, which is around 11°C for women and around 9°C for men.

Other stimuli such as good nutrition and exercise are also believed to encourage the browning process.

What their appearance means

White fat cells are typically round cells of variable sizes with a single, large, lipid droplet. These droplets can be converted to fatty acids during starvation or when energy demands increase. Fatty acids are the building blocks of fats which can be absorbed into the blood.

Brown fat cells are smaller, and have many small lipid droplets per cell. Brown fat cells also contain many energy generating organelles called mitochondria. These are rich in iron, which give them their brown colour when exposed to oxygen.

Beige fat cells have features midway between white and brown. They come from white parent cells, but function like brown fat cells by burning energy to produce heat when the core body temperature dips. The browning process is helped by cold temperatures, and the nervous and immune systems.

It’s long been known that white fat cells can acquire the characteristics of brown fat cells under certain conditions, such as low temperatures and certain proteins. But researchers now know that all types of fat cells can change from one form to another depending on what triggers they’re exposed to and the demands placed on the organism they’re found in.

A fat cell can only change into another form one of two ways. It can switch its corresponding genes in a process known as transdifferentiation. Or, the change can be achieved by reverting any mature fat cells to their common parental form (dedifferentiation), then “reprogramming” their genes (redifferentiation). This second process can happen naturally, but is usually achieved in lab settings.

The conditions for natural change can also be sped up. Nutritional supplements, such as the flavonoids resveratrol and quercetin, which are found in fruits and vegetables, can help the browning process. Exercise has also been shown to increase browning.

Exposure to temperatures slightly above the shivering point for at least two hours is also known to help with browning. However, this needs to be practised regularly to see any real changes.

Studies also show that brown fat cells are associated with better health. They encourage weight loss, which may subsequently reduce obesity and other related diseases caused by excess weight.