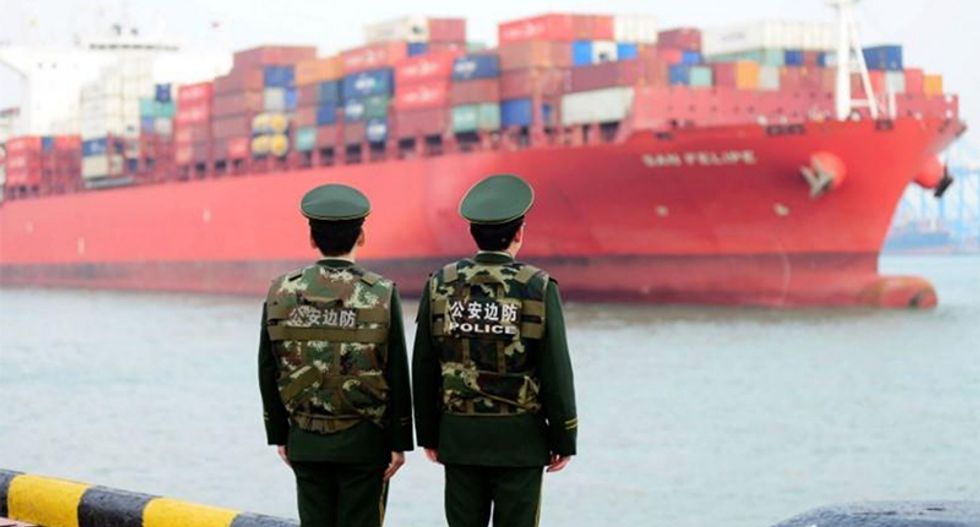 But analysts warned of weakness ahead as key markets suffer downturns, as well as the brewing threat of a renewed trade war with the United States.

Imports fell 14.2 percent on-year, a steeper drop than last month, according to the Customs Administration.

A forecast of analysts by Bloomberg had predicted an 11 percent dive in exports and a 10 percent plunge in imports.

Exports of medical instruments and devices rose 11 percent in the first four months from a year ago, according to customs data, while most other categories contracted.

ING chief economist for Greater China Iris Pang told AFP that China's exports of medical supplies provided a boost as the rest of the world grappled with the pandemic.

Pang added that while exports of clothing shrank, sales of textile yarns, fabrics and other products grew, implying they were used to make medical supplies.

Beijing says it has been successful in largely curbing the spread of the virus in the country, and many businesses and factories are now back at work after months of closure.

And Louis Kuijs of Oxford Economics noted that "April shipments may have been boosted by exporters making up for shortfalls in the first quarter due to supply constraints then".

In the January-February period, the height of China's coronavirus outbreak, exports plummeted 17.2 percent.

In spite of the bounceback -- the first return to positive territory for exports this year -- analysts do not expect the trend to last as China's key trading partners fall into recession.

And although the US and China signed a phase one trade pact in their bruising trade war in January, Julian Evans-Pritchard of Capital Economics warned that "the threat of additional US tariffs on Chinese goods shouldn't be ignored".

Customs data showed that in April China's trade surplus with the US widened from a year ago by 8.8 percent, to around $22.8 billion.

Over the last few months tensions have ramped up again as the two sides exchanged barbs over the pandemic and its origins, with US President Donald Trump recently threatening new trade tariffs against Beijing.

Nick Marro, global trade lead at The Economist Intelligence Unit, said that it could be hard for both sides to meet earlier commitments.

"Shipments from the US remain well below the levels needed to achieve the purchase pledges under the trade accord... with the deterioration in US-China ties, there's a risk that the US might act brashly," he said.

An independent gauge released Thursday, the Caixin PMI, showed that the services sector is still in contraction and below analyst expectations.

There are still some social distancing rules in places and fears about mounting unemployment are hitting consumer confidence.

The daily average of domestic trips over the Labour Day holiday at the beginning of May was half of last year's total, while daily tourism revenues fell 68 percent.

On Wednesday, Beijing pledged to roll out and improve on policies to keep employment stable, following an earlier series of support measures.

In contrast, the eurozone economy is expected to contract by a staggering 7.7 percent this year, while the US private sector has lost 20.2 million jobs last month alone, according to payrolls firm ADP.

Analysts have warned of an enormous impact on world trade from the pandemic, which has killed more than 260,500 worldwide.

Oxford Economics says global trade in goods and services could be cut by up to 15 percent in 2020, much larger than the decline during the 2009 global financial crisis.