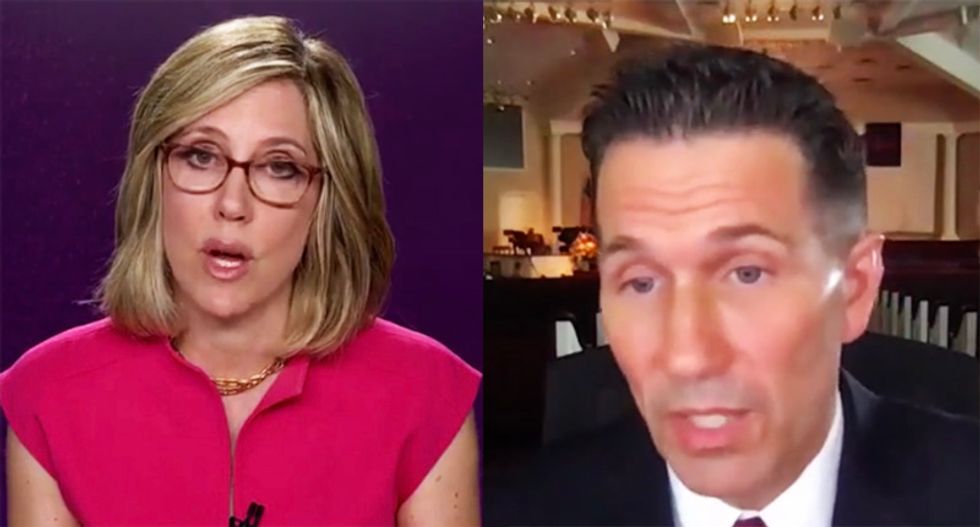 Appearing on CNN's "New Day" on Tuesday morning, a New Jersey pastor who is defying state orders to stay closed, and plans to sue New Jersey Gov. Phil Murphy (D) if he doesn’t designate places of worship essential, was confronted by Alisyn Camerota for refusing to wear a mask during his Sunday sermon.

With Pastor Charles Clark II of the Solid Rock Baptist Church in Camden County saying the governor is infringing on his 1st Amendment rights by forbidding in-person services during the coronavirus pandemic, Camerota pressed him over whether he wore a mask during this past weekend's sermon.

"It sounds like you're bending over backwards to do all the right things, even things that are beyond what is necessarily officially recommended and I'm sure that's helpful. But it is actually your behavior in front of the congregation that could possibly be the riskiest. I'm sure you heard -- hold on," she began as he attempted to interrupt. "Let me just state the case as is stated by the National Academy of Sciences. You projecting in front of the congregation, it is your sermon. It is the idea that you would take off the mask for that, and the reason that I say that is because there is research that shows that one minute of loud speech, the kind you would do while projecting, produces thousands of droplets that then remain airborne for 12 minutes. And so everybody else, it seems, is doing pretty risk free or as low risk behavior as you can, but yours might be the most dangerous."

"We're up on a platform and we have a distance between us and the first pew that is more than six feet. And so I understand what is being said, the whole idea of the mask or not the mask, including back to things Dr. [Anthony] Fauci has said at times, the mask is very controversial, we are wearing them," he attempted. "I, being on the platform, people that are back away from the first pew, I don't think that's uncommon including in press conferences and where the president and others have spoken, that there is a distance between us and the parishioners, and so every time we come off the platform, we do put our mask on."

"Yeah, I mean, it is the problem with the projecting. I'm heartened to hear about the choir, because it is the singing that gets people sick," Camerota countered. "But it is the projecting of the pastor and there are a couple of instances where we can look to see that parishioners get sick. In Arkansas, a pastor and his wife infected 35 people doing just that kind of preaching, three people then died. In Washington, that was a choir, but there was one person sick in a choir who because of singing infected 71 people, two of them died."

"The reality is in spreading of the virus, there are no guarantees," Clark shot back. "Everyone that I know is trying to be as safe as possible. But this idea that because I'm up on a platform, somehow I'm going to infect a whole entire congregation, that doesn't make sense."

"I understand that," the pastor exclaimed. "But if I was on the New Jersey boardwalk today or if I were to be in Home Depot today, if I were to be in the grocery store today, and I know some -- I know we're wearing masks in those places -- but we're putting on a mask."

"There is no guarantee of with me wearing that mask or not that it is going to make it perfect being there on the platform," he added.

"I know," Camerota replied. "It is all about cutting down on risk and that's it. What you can do is cut down on risk."