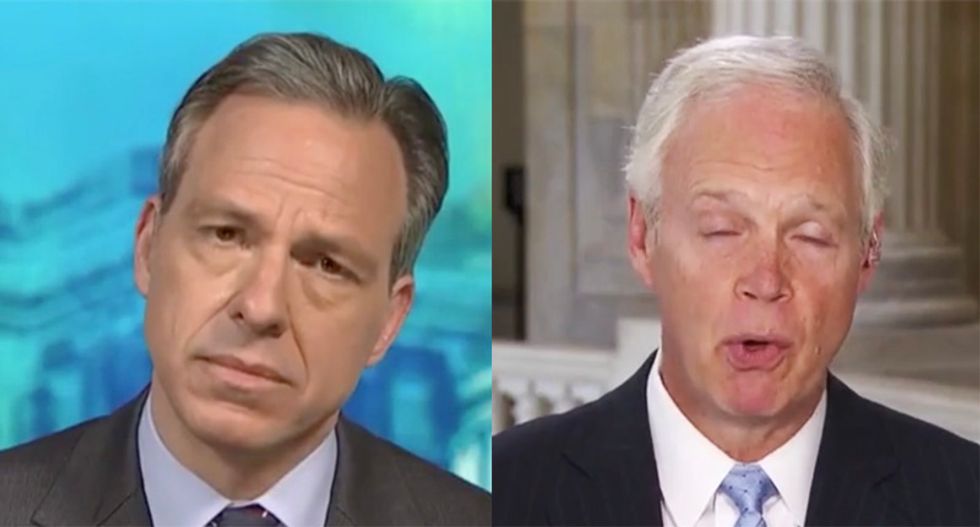 CNN "State of the Union" host Jake Tapper was forced to cut off Sen. Ron Johnson (R-WI) on Sunday morning after the Republican went off on a rant about Russian interference in the 2016 election.

In an interview that grew increasingly, contentious, Johnson tried to implicate former President Barack Obama in a broad conspiracy -- what Donald Trump calls "Obamagate" -- to destroy the Trump presidency before it even began.

"Something is amiss here," Johnson stated. "Something was going wrong. I don't know exactly what happened, we're getting a clear picture of it. I think the chickens are coming home to roost."

"What does that mean?" Tapper shot back. "Obviously there's questions about FBI behavior, Peter Strzok was fired, Lisa Page resigned. James Comey is no longer on the scene. What are you alleging by the Obama administration? I have yet to see any facts at all supporting this grand conspiracy that the Trump administration is pushing,"

"Jake, it's because a lot of members of the media have not been asking the questions or looking," Johnson attempted. "Let's face it, there were selective leaks that ramped up this entire Russian collusion hoax, and it was a hoax. Who's the recipients of the leaks? 18 different outlets."

'I don't know what you mean by a hoax," Tapper responded.

"I would like to see members of the press looking into the leaks and how this story got spun up as a result of the special counsel having to put this country through three years of a mini-constitutional crisis. That's what I would like to see," the Republican senator insisted.

"Senator, it's not a hoax that the Russians attempted to interfere in the 2016 election, you know that," Tapper explained.

"They put Russian information into the Steele dossier," Johnson exclaimed.

"I'm not disputing it, I'm not disputing the idea we don't know what was in the Steele dossier or whether it was disinformation. You're suggesting the entire Russian interference company was a hoax, it was not," Tapper lectured. "The Senate Intelligence Committee run by a Republican has concluded it was not. Every inspector general said it was not a hoax; the Russians were trying to interfere."