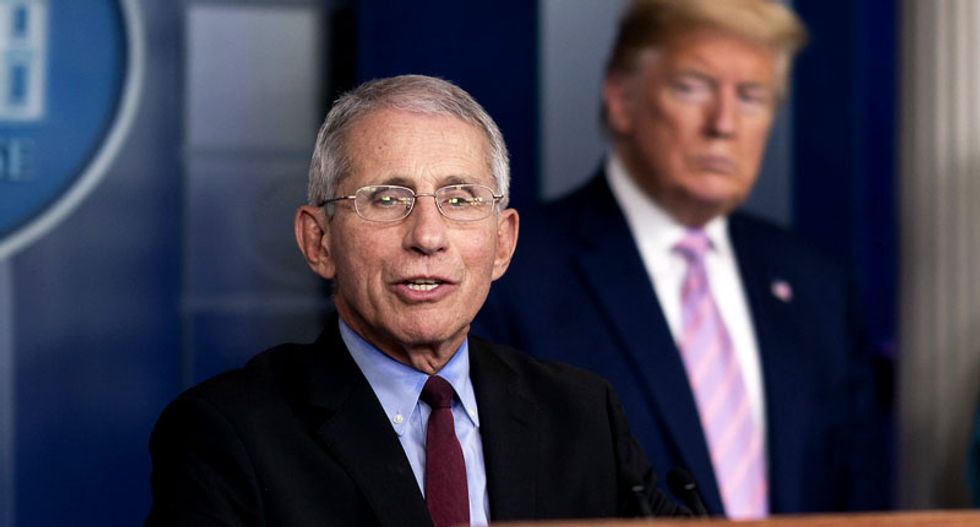 President Donald Trump is in an awkward position. If he doesn't reopen the country -- the economy will likely stay where it is. If he reopens the country prematurely, people will die. In an election year, he's betting on the economy being the more important option than the lives of Americans.

A CNN column proposes a few reasons that Trump has decided to wage a war against Dr. Anthony Fauci, the government's leading epidemiologist.

It isn't merely that Trump has decided that the country needs to reopen all businesses, it's that he doesn't seem to have another plan for reviving the economy other than reopening. Any future stimulus package Democrats are working on is "dead on arrival," Trump proclaimed in a Fox News interview Wednesday.

"The White House has now essentially bet everything that states loosening restrictions will spur growth in time for November's election," the column explained.

Fauci's information flies in the face of Trump's plans. If a scientific expert says reopening will cause more suffering and death, Americans stand up and take notice. They're likely more apt to trust a long-time virus expert over a president who told the world to inject disinfectant into their bodies to kill the virus.

Fox News spent most of the week attacking Fauci, saying that "no one elected him," and warning people he was becoming a dictator.

"By casting him as an unelected bureaucrat who is attempting to undermine Trump, they're harkening back to the 'deep state' conspiracies that have fueled Trump countless times before, most recently during impeachment and even concurrently with the events surrounding the Michael Flynn case," the report continued.

At the same time, Trump is likely miffed that more people trust Fauci than himself. Approval ratings show that Fauci is far more trusted by the public than the president.

"Officials say Trump has long held out some resentment that Fauci is respected and liked by people he has struggled to convert," said CNN.

Fauci testified this week that his relationship with Trump isn't a combative one, but Trump is being undermined publicly and he isn't happy about it.

The good doctor likely isn't headed for the political guillotine, but CNN anticipated the White House will begin to limit Fauci's public appearances and find other scientists who can undermine his warnings and match the president's strive to reopen at all costs.

Read the full column at CNN.com.