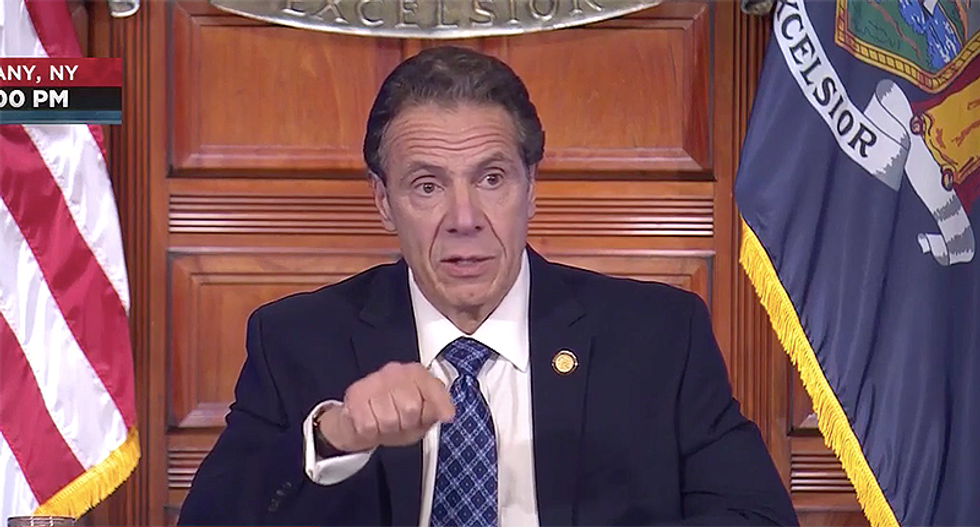 Conservative Washington Post columnist Jennifer Rubin shredded President Donald Trump's failed response to the COVID-19 crisis, saying that if the United States makes it through, it will be as a result of the diligent dedication of American governors and in spite of Trump.

"There is no guidebook," wrote Rubin on Monday. She noted that the Trump administration had a guidebook from the previous administration, but threw it out. The president has appeared a stark contrast to governors, as "narcissistic, ignorant, devoid of empathy, resistant to reason and never, ever willing to admit error."

The governors that have been the most successful in fighting the crisis are the ones who listened to the warnings and the science.

“[T]he fact of the matter is, we have to listen to the epidemiologists and our public health experts … [By following their advice] we have seen our curve get pushed down. We have saved lives in the process. And we have to keep listening to the epidemiologists and experts, and not listen to the partisan rhetoric or these political rallies, or tweets, for that matter," said Gov. Gretchen Whitmer (D-MI).

While Trump is continuing to try and control the virus, governors, by contrast, recognize the virus controls the future, not politicians.

“This isn’t something we just negotiate ourselves out of and it’s a political matter. This is a public health crisis that has taken the lives of over — of almost 70,000 Americans, has put 30 million people into unemployment,” Whitmer told CNN. “We have lost in the last 24 hours almost the same number of Americans that were killed on 9/11. And that’s just in the last 24 hours. Whether you agree with me or not, I’m working to protect your life if you live in the state of Michigan. I’m going to continue to do my job, regardless of what tweets come out or what polls come out or what people think that is — makes sense.”

Last week, an op-ed from epidemiologists in the New York Times calculated that the administration's late response cost 90 percent of the lives that have been lost. If Trump had issued a stay-at-home order just two weeks earlier, on March 2, the overwhelming majority of the nearly 70,000 lives could have been saved. If he'd called for the shut down one week earlier, 60 percent of lives would have been saved.

Rubin noted that the best governors have been respectful of the reopen protests, but refused to allow the armed mobs to influence safety rules.

The third thing that governors have been able to do that the president has not is ask for help when needed. Gov. Larry Hogan (R-MD) managed to score test kits from South Korea when the federal government couldn't deliver.

"New York Gov. Andrew M. Cuomo (D) has been begging the federal government to take control of the supply chain," said Rubin. "It’s a job properly performed by the federal government, which should not force 50 states to compete against one another for scarce supplies. When it did not seem to be happening, Cuomo and other governors acted."

During his Sunday news conference, Cuomo finally brought northern states together so they can bid on supplies as a collective, instead of bidding against each other.

“When you put all those hospitals together, all that public health capacity together, which will make us more competitive in the international marketplace,” he said. “I believe it will save taxpayers money.”

In the end, Rubin explained, that the successful guide has been "follow the science, ignore the mobs and fend for yourself." Those who have managed to make it through are the ones who have managed to flatten their curve and are well prepared for a second wave of the virus while states like Texas, Florida, Oklahoma and others have reopened.

"It’s the next best thing to having a functional federal government," she said.