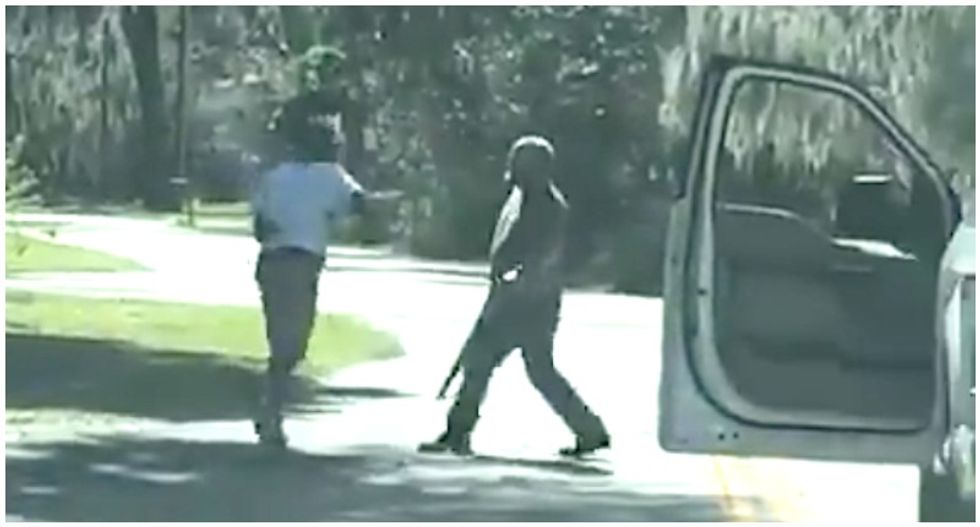 While out for a jog two months ago, 25-year-old Ahmaud Arbery was shot and killed by a man and his son who chased him down. Now, video that purportedly shows the incident has emerged.

The video shows Arbery jogging around a truck. At one point, Arbery is seen struggling with a man who exited the vehicle carrying a weapon. At least two shots can be heard before Arbery can be seen collapsing to the pavement.

Activist Shaun King shared the video on Twitter, where he described it as a "modern-day lynching."

Lee Merritt, a lawyer for the victim's family, also posted the clip to Twitter.

"The video clearly shows Mr. Arbery jogging down the road in the middle of the day," Merritt said in a statement to NBC News. "Mr. Arebery had not committed any crime and there was no reason for these men to believe they had the right to stop him with weapons or to use deadly force in furtherance of their unlawful attempted stop."

Arbery’s mother, Wanda Cooper, told CNN that when she was notified of her son’s death, police told her he took part in a burglary and that there was a “confrontation between her son and the homeowner and a struggle over a gun.”

There have been no charges against the suspects, identified as former police officer Gregory McMichael and his son Travis. The men told police they believed Arbery had been involved in a neighborhood burglary.

"No one disputes that McMichael, son of Brunswick District Attorney’s Office investigator Greg McMichael, shot and killed Arbery, but he was not immediately charged because Travis McMichael claimed he was acting within the scope of a citizen’s arrest," News4Jax.com reported.

“This is an ongoing investigation,” the Glynn County Police Department said in a statement April 28, adding that it “continues to gather and provide information to the District Attorney’s Office that the case has been assigned to.”

Georgia prosecutors said Tuesday they plan to present evidence to a grand jury for possible charges against the two men.

“I am of the opinion that the case should be presented to the grand jury of Glynn County for consideration of criminal charges against those involved in the death of Mr. Arbery,” said Tom Durden, District Attorney Pro Tempore for the Brunswick Judicial Circuit, who started investigating the incident on April 13.