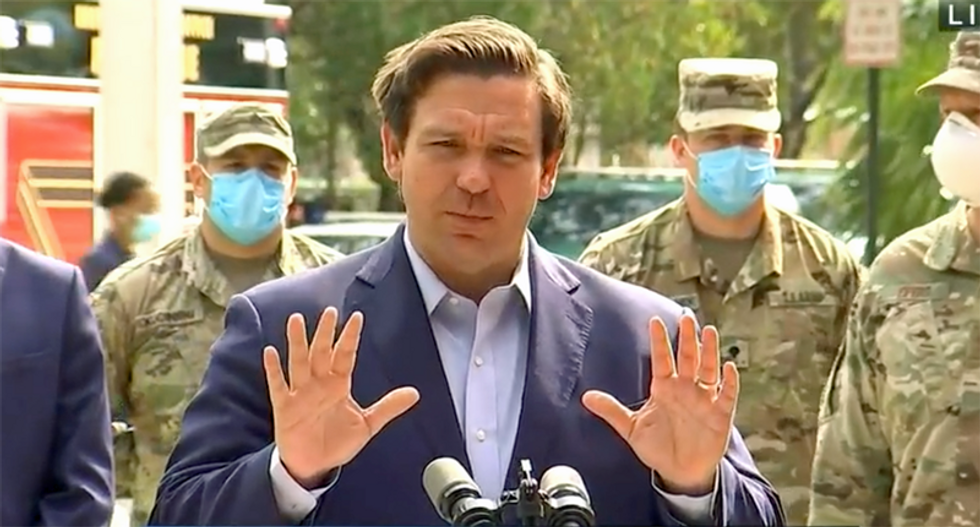 Florida Gov. Ron DeSantis continues to draw criticism for the state's response to the coronavirus pandemic.

"Late last Friday, the architect and manager of Florida's COVID-19 dashboard — praised by White House officials for its accessibility — announced that she had been removed from her post, causing outcry from independent researchers now worried about government censorship," Florida Today reported Monday.

"The dashboard has been a one-stop shop for researchers, the media and the public to access and download tables of COVID-19 cases, testing and death data to analyze freely had been widely hailed as a shining of example of transparency and accessibility," the publication reported. "But over the last few weeks it had 'crashed' and gone offline; data has gone missing without explanation and access to the underlying data sheets has become increasingly difficult."

"The site was created by a team of Florida Department of Health data scientists and public health officers headed by Rebekah Jones, who announced last week her removal as of May 5, in a heartfelt farewell note emailed to researchers and other members of the public who had signed up to receive updates on the data portal," the report noted.

"I understand, appreciate, and even share your concern about all the dramatic changes that have occurred and those that are yet to come," she wrote. "As a word of caution, I would not expect the new team to continue the same level of accessibility and transparency that I made central to the process during the first two months. After all, my commitment to both is largely (arguably entirely) the reason I am no longer managing it."

"The 'Red Vest Retreat' at Keswick Hall, a luxury resort outside Charlottesville, will take place Thursday and Friday, with panel discussions on topics like education, an address by former House speaker Newt Gingrich and a private dinner at a nearby residence, the people said. The title refers to the fleece vests that Youngkin regularly wears," the newspaper reported.