Fox News' coronavirus coverage decreased more than 40% over the past month: study 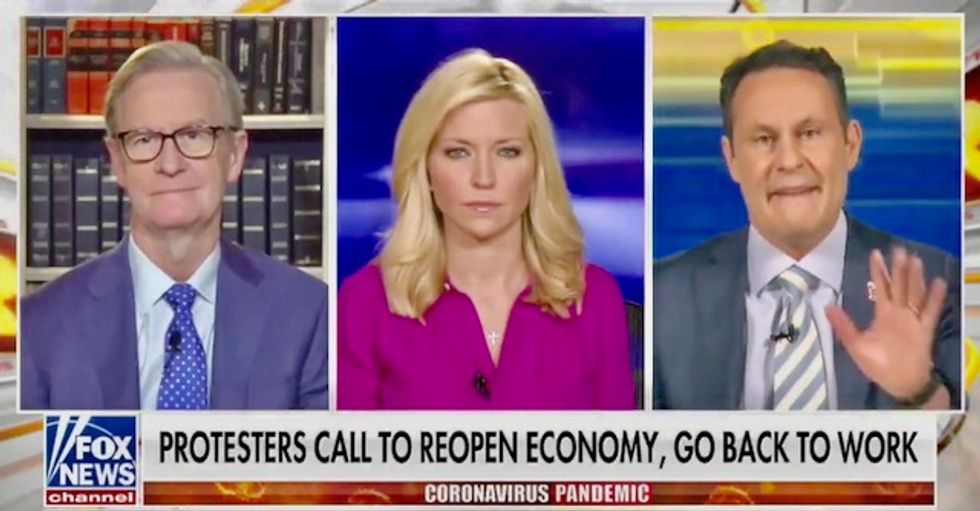 Fox and Friends (Screen Shot)
Fox News' coronavirus coverage has steadily lapsed over the last month. At the same time, the right-leaning network's focus has also departed from the main, with coverage shifting from public health and scientific concerns to economic anxiety and fringe protests as airtime for medical experts has been dramatically slashed.

From March to May, the network posted a 20% decline in its coronavirus coverage, according to a recent Media Matters review of its internal cable news database.

Between March 12 and April 10, Fox News dedicated 95% of its weekday segments to the coronavirus pandemic, but over the following month — specifically, between April 13 through May 11 — that number dropped to 74%.

In contrast, Media Matters found that CNN's coronavirus coverage comprised 90% of the network's airtime every weekday since March 12 with just one exception — after the decision in the Flynn case. Over the same time period, the study found, MSNBC's coronavirus coverage accounted for more than 80% each day — again, with the only exception being Flynn.

Even when the coronavirus comes into focus, Fox has pivoted away from topics of health and science in favor of coverage related to efforts to reopen the economy and associated anti-lockdown protests.

For instance, the network dedicated nearly three hours of airtime over three and a half days to Dallas salon owner Shelley Luther, who won right-wing plaudits for choosing jail time over compliance with the state's stay-home guidelines.

Fox News also focused heavily on anti-lockdown protests, giving the fringe movement six hours of airtime in an eight-day period; at one point, all of the network's primetime personalities praised the protesters for their "patriotism" on the same day.

At the same time, however, Fox News personalities are all required to work remotely, which the network recently extended through at least June 15.

In what is perhaps the most remarkable indicator, Fox has dramatically cut airtime for medical experts on the White House coronavirus task force, falling from its late-March high of up to 14 appearances a week to just one appearance a week over the last two weeks.

Fox primetime hosts, none of whom have medical or scientific qualifications or backgrounds, have at the same time dedicated entire segments to maligning the administration's career medical officials, not only questioning their decades of expertise but ascribing them disproportionate influence and scurrilous, conspiratorial motives.

The network has simultaneously cinched the spigot on its own medical contributors, who at one point appeared about 30 to 40 times a week but in May have been featured 15 times a week or fewer.

Fox's coronavirus coverage has faced a storm of criticism from the beginning, but the network's focus has fallen increasingly out of step with the majority of Americans. As the country looks ahead and weighs the risks and benefits to reopening parts of the economy and society, the network's decisions fuel the narrative that the national divide is not about where Americans stand on the science or the advice from experts, but, as Fox's coverage reflects, is instead a purely partisan debate, where science is excised almost entirely in the name of ideology and anger.

This departure is not without serious risk to public safety: A University of Chicago study last month found that viewership of Fox News' Sean Hannity correlated with a higher risk of dying from the virus.