Many kids in the U.S. today attend public schools composed mostly of students of the same race. Aksinia Abiagam/Shutterstock.com

Congress tried to help in the US$2 trillion economic relief package known as the Coronavirus Aid, Relief and Economic Security, or CARES Act, by designating $13.5 billion for public schools. The money was supposed to be distributed to school districts based on the number of low-income students they enroll. A new directive from the U.S. Department of Education, however, tells districts to share far more of the money than expected with private and religious school students, even though fewer than 5% of those children are poor.

I’m a scholar of federal education policy and history who has testified before a congressional commission and federal courts in disputes over federal funds. In my view, this new policy runs counter to what Congress has tried to achieve in public education for the past 50 years and it directly contradicts the CARES Act.

The funding is supposed to stabilize public school budgets as local and state revenues, the primary sources of U.S. public school funding, decline and the costs of responding to the pandemic increase.

Schools from coast to coast are buying computers and scrambling to get low-income students the bandwidth they need for distance learning.

The relief package specified that the money would go to school districts based on the number of low-income students they serve. Those are children who are eligible for free and reduced-priced meals. Students whose families are below 185% of the official poverty line – which as of 2020 stands at $26,200 per year for a family of four – fall into this category.

School districts are also to reserve a portion of those funds to ensure equitable services for any low-income students who may attend private schools. That’s in keeping with a practice in place since Congress passed the Elementary and Secondary Education Act of 1965.

The department’s new guidance calls for a different method. Public school systems are being told to share these new federal funds based on the total number of students who attend private schools – rather than the much smaller number of low-income students in these schools. In other words, public school districts are being told to reserve funds for roughly 6 million total private school students, of which only an estimated 300,000 are low-income children.

By contrast, 52.3% of the nation’s 50 million public school students are low-income.

In Mississippi, for instance, 71% of public school students are poor, and nationwide, on average, family incomes in private schools are as much

as 88% higher than those in public schools.

Moreover, private schools, unlike public schools, are already eligible for federal payroll protection funding under the CARES Act because they are considered small businesses. 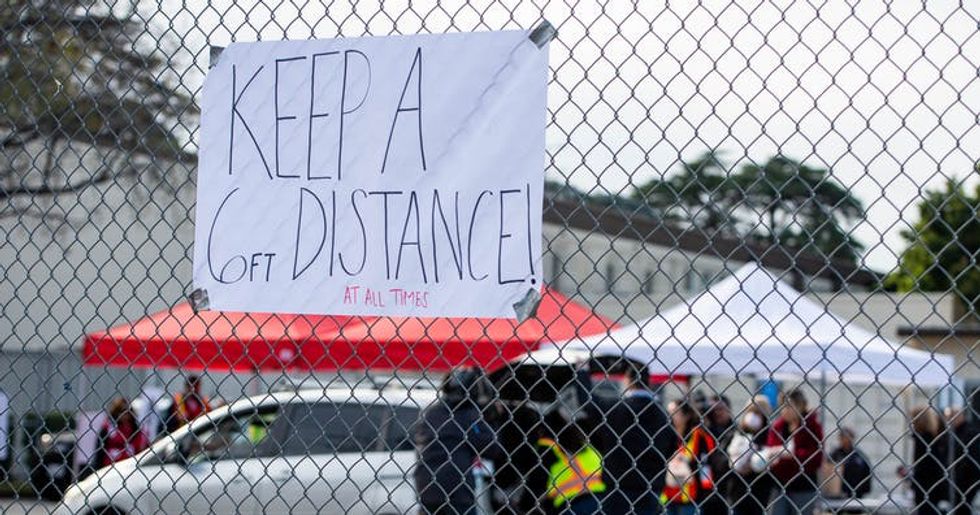 Public schools were taking many precautions with meal distribution after a few weeks of widespread school closures.

Only about 10% of the nation’s students attend private schools. This is something Education Secretary Betsy DeVos has long aimed to change. She has consistently supported policies that would increase public funding for private school enrollment in the form of vouchers and tax credits. From this perspective, the current policy – while inconsistent with the law, equity and history – makes sense. But this time, DeVos’ private school policy would directly shortchange poor students.

The accounting method will require public schools – which are only receiving new federal money based on their poor students – to reserve multiple times more money for private schools than the CARES Act requires.

In Passaic, New Jersey, where the majority of public school students are poor, the district will need to reserve $1.4 million instead of $300,000 for private school students, according to an education advocacy group in that state. Montana estimates it will need to reserve $1.5 million for private schools rather than $206,469 it believes the law requires, The New York Times reports.

This will only increase the challenges that the highest poverty schools face. Before the pandemic even hit, public schools serving the highest-poverty communities had $1,000 less per student than those educating affluent students. These shortfalls are likely to expand based on current economic conditions.

During the Great Recession, states like North Carolina and Florida cut public school funding by 20% or more in three years. Poor communities there and elsewhere were the hardest hit.

The practical effects of these cuts were increased class sizes, unfilled teacher vacancies, higher percentages of uncertified teachers and schools where critical support staff like nurses and guidance counselors were too often missing. Some school districts were in such dire straits that they teetered on bankruptcy and considered closing some schools.

One solution to the current problem is for Congress to reiterate its original intent even more clearly. The new proposed $3 trillion relief bill pending in the House includes a provision that would do that.

The quicker option is for Congress to use its oversight powers to force the Education Department to concede that it made an error. That happened earlier this year when it reversed course on its plan to change the method for allocating funds to rural schools.

Those options, however, can be slow and uncertain. That’s one reason Indiana State Superintendent of Public Instruction Jennifer McCormick went ahead and told her school districts to ignore the guidance this week.

The law is on McCormick’s side. Her action offered a clear path forward for state and local officials across the nation who don’t believe that waiting for the political process to correct itself is fair to the country’s children who need help now.