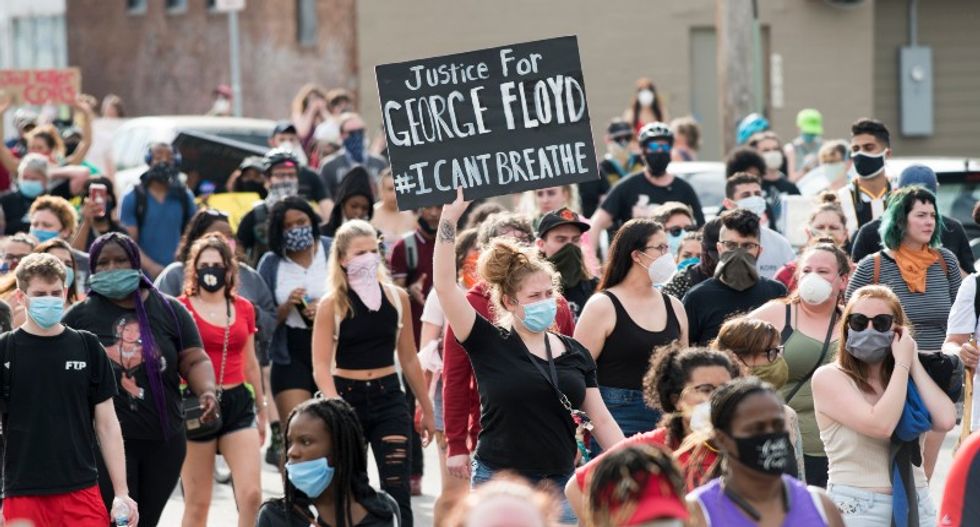 Thousands gathered on foot and in cars in south Minneapolis to protest against police violence and call for justice for George Floyd. On May 25, Minneapolis Police officers arrested George Floyd, handcuffed him, then put a knee on his neck as he said he wasn't able to breath. George Floyd appeared to stop breathing and died soon after. Protesters met in the area of Chicago Avenue and 38th Street, but many blocks in the area had people with signs while others drove by protesting from their cars. People marched east on 38th Street and some worked their way to the Minneapolis 3rd precinct building where there were clashes with police after dark. Photo by Fibonacci Blue.

Minneapolis officials called for calm Thursday as they girded for fresh violence after a second night of demonstrations over the police killing of an unarmed African American left numerous stores ablaze and one person dead.

Protesters were planning to take to the streets again in the northern US city Thursday evening over the death in custody of 46-year-old restaurant worker George Floyd, seen as the latest in a long series of unjustified police killings of black civilians.

The White House said President Donald Trump was "very upset" upon seeing "egregious, appalling" video footage of Monday's killing and had demanded his staff see that the investigation was given top priority.

The FBI and Justice Department said they were investigating, while the city weighed calling in National Guard troops as well as police from neighboring St. Paul to help keep the peace.

"In the coming days we will have an all-out effort to restore peace and security in our city," said Mayor Jacob Frey, who has demanded the arrest of the officer allegedly responsible for Floyd's death on Monday.

Frey said it was crucial to protect community assets like food stores and pharmacies -- "especially during a pandemic."

Demonstrators clashed with law enforcement, looted stores and set fires to shops and a construction site overnight in the busy Lake Street corridor of Minneapolis, and were met with police tear gas and rubber bullets.

Police chief Madaria Arradondo said he supported the public's right to demonstrate peacefully but warned he would not allow the kind of violence that took place Wednesday.

"But I will not allow to continue to increase that deficit by re-traumatizing those folks in our community."

Ilhan Omar, A black Somalia native who represents Minneapolis in Congress, called for calm but said there was "extreme frustration" in the community over the incident.

"Anger really is boiling over because justice still seems out of reach," she said.

Firefighters continued to battle blazes around midday Thursday (1800 GMT) around Lake Street, where more than 20 businesses were set on fire.

One person was reported dead of a gunshot wound, with police investigating whether he was shot by a shop owner in the area of the most severe rioting.

The protests were sparked by widely-shared video showing a handcuffed Floyd gasping for breath and pleading as a policeman pressed his knee on the suspect's neck after detaining him for allegedly using a counterfeit $20 bill.

After at least five minutes under the officer's knee, and as other police held him on the ground, Floyd stops breathing and goes still. He was taken to hospital where he was declared dead.

Protests also took place outside the house of one of the four officers involved in the detention and death of Floyd, as well as at the home of Hennepin County Attorney Mike Freeman, demanding he indict the officers.

Floyd's brother, Philonise Floyd, told CNN the officers, who were fired, should be arrested and charged with murder.

"Justice is these guys need to be arrested, convicted of murder and given the death penalty," he said.

"But people are torn and hurting because they are tired of seeing black men die, constantly, over and over again."

Concern and anger over Floyd's death spread around the country.

House Democratic leader Nancy Pelosi said the video footage showed there was no excuse for his death.

"We saw a murder take place before our very eyes. And so the fact that the officers were fired, that's one thing, but there has to be some justice in all of this," she said.

In Los Angeles, where there are longstanding tensions between law enforcement and the black community, protesters marched on downtown Los Angeles and briefly blocked the 101 Freeway on Wednesday.

Some smashed the windows of two police highway patrol cruisers, clambering on the hood of one of the vehicles.

The protests evoked memories of riots in Ferguson, Missouri in 2014 after a policeman shot dead an African American man suspected of robbery, and the case earlier the same year of New Yorker Eric Garner, who was detained for illegally selling cigarettes and filmed being held in an illegal chokehold that led to his death.