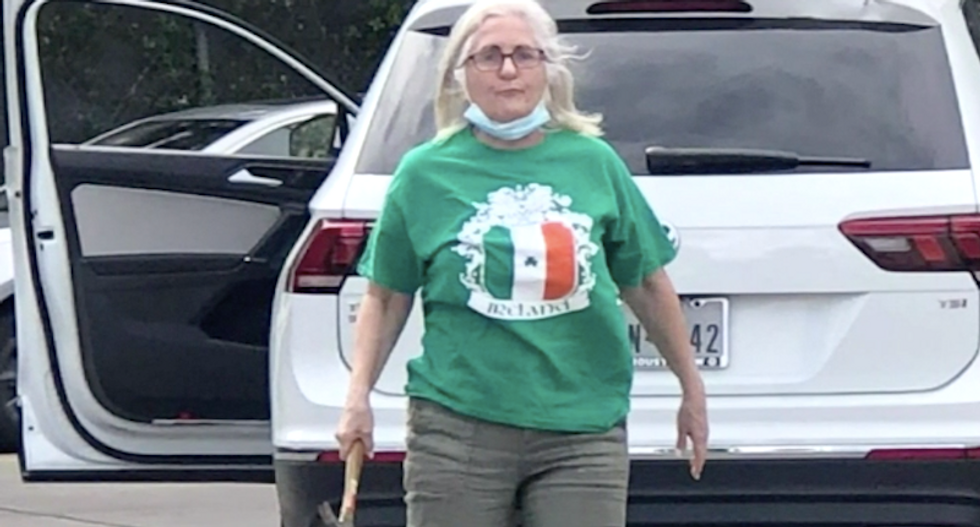 A hammer-wielding supporter of President Donald Trump threatened a Latino couple while shopping in Houston.

Constance Lynn Bono was arrested Sunday after she confronted Arturo Corovez and his wife, Dr. Lia Franco, apparently mistaking the Ecuador natives as Mexican, and screamed bigoted threats at them, reported KPRC-TV.

Franco has been treating coronavirus patients in New Orleans, where the couple now live, while she finishes her medical residency, but decided to visit Texas for a break over Memorial Day weekend.

They noticed a woman following behind them while driving to a restaurant, and noticed she was displaying a hammer as she drove.

“She stopped behind us,” Cordovez said. “After that she started showing a hammer through the mirror. She was shaking her arm ... and cursing at us, I think. I was thinking, what did I do?”

They called 911 and pulled into a gas station, where the woman pulled alongside them and began screaming.

Then the woman got out of her car holding the hammer and made threatening motions before police arrived and took her into custody.

The 60-year-old Bono, whose Facebook page is filled with soft-focus selfies and content from black Trump supporters Terrence K. Williams and the Hodge Twins, was charged with aggravated assault with a deadly weapon, a second-degree felony with a punishment range of up to 20 years in prison.

If prosecutors believe she was motivated by racism, the charge could be enhanced to a first-degree felony, carrying a possible life sentence.