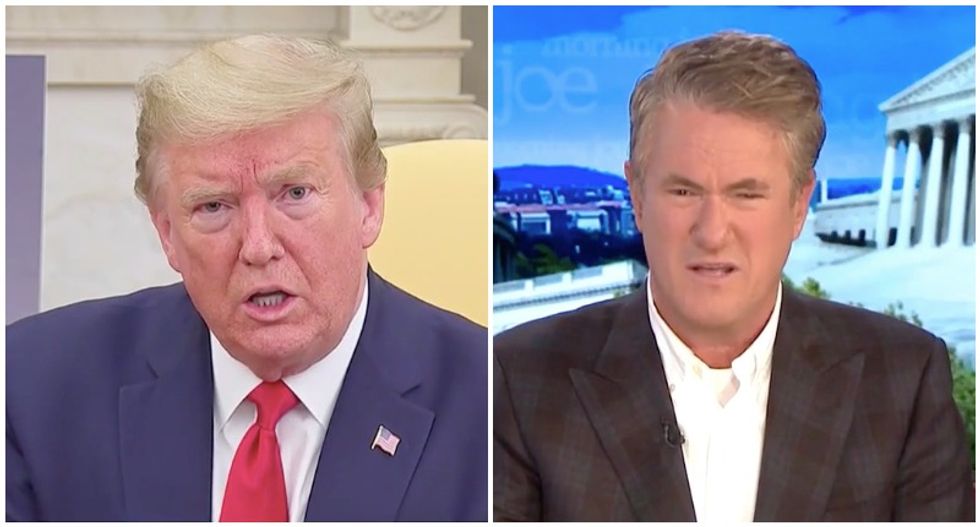 The "Morning Joe" host pointed out that Flynn admitted to lying to investigators about his contacts with the same Russian ambassador Trump hosted in the White House after he fired FBI director James Comey, whom he slurred as a "nutjob" while meeting with two top Kremlin officials.

"You know, he can say hoax as many times as he wants to say hoax, it doesn't change the fact that he would be sitting in jail right now if he weren't president of the United States and if there weren't a corrupt attorney general," Scarborough said. "He committed one act of obstruction of justice after another. Robert Mueller said, 'I can't get to that,' as far as whether he can be charged in the criminal complaint, because he is president of the United States -- Justice Department guidelines don't allow me to do that."

"Make no mistake of it, Donald Trump committed one crime after another," Scarborough continued. "You may not want to hear it, maybe your relatives don't want to hear it. It will be in the history books because it lays out perfectly as an obstruction of justice case. Of course, he can call it a hoax all he wants -- we've got the quotes."

"There's one quote after another where Donald Trump admits that he committed obstruction of justice that would throw either you or me in jail if we had done the same thing," he added.

Flynn pleaded guilty to lying about his pre-inauguration contacts with Russian ambassador Sergey Kislyak, who visited the White House in May 2017 with Russian foreign minister Sergei Lavrov -- and Trump admitted to them that he had fired Comey because of the investigation into his campaign ties to the Kremlin.

"It is so fascinating," Scarborough said. "Flynn, he lies about a meeting with Russia's ambassador. Trump is talking to Putin about this case being dismissed. It reminded me -- and I went back to look -- that in May of 2017, do you remember when that same Russian ambassador was in the White House, and the foreign minister was in the White House, but they wouldn't let any American press in the White House? This was what Donald Trump said to the Russians on that day, 'I just fired the head of the FBI, he was crazy -- a real nutjob. I faced great pressure because of Russia, that's been taken off.'"

"The president immediately running to the Russian foreign minister, immediately running to the Russian ambassador, and bragging that he fired the director of the FBI to stop the Russia investigation," Scarborough added. "He is so stupid. He didn't realize -- he really is just so stupid. He didn't realize that if you fire the director of the FBI because he is investigating you because of dealings with Russia, that everybody is lying about in your entire administration, that's just going to cause the American people to want more investigation."

"So here it is, it comes full circle," Scarborough said. "He hires his corrupt Roy Cohn, corrupt Roy Cohn throws out a case where the guy pled guilty twice. Donald Trump said he is a liar -- he lied to the vice president about his meeting with the Russians, he lied to the FBI about his meeting with the Russians. He is such a liar, I had to fire him."

"Yesterday, Barr decides to throw out that case," he added. "Trump celebrates, calls and talks to the Russians yet again on the other side of this, bragging like he did about firing the FBI director, yesterday, bragging about how his corrupt Roy Cohn threw out a case of his national security adviser lying to the FBI about contacts with Russia."