In Washington, signs of lockdown fraying 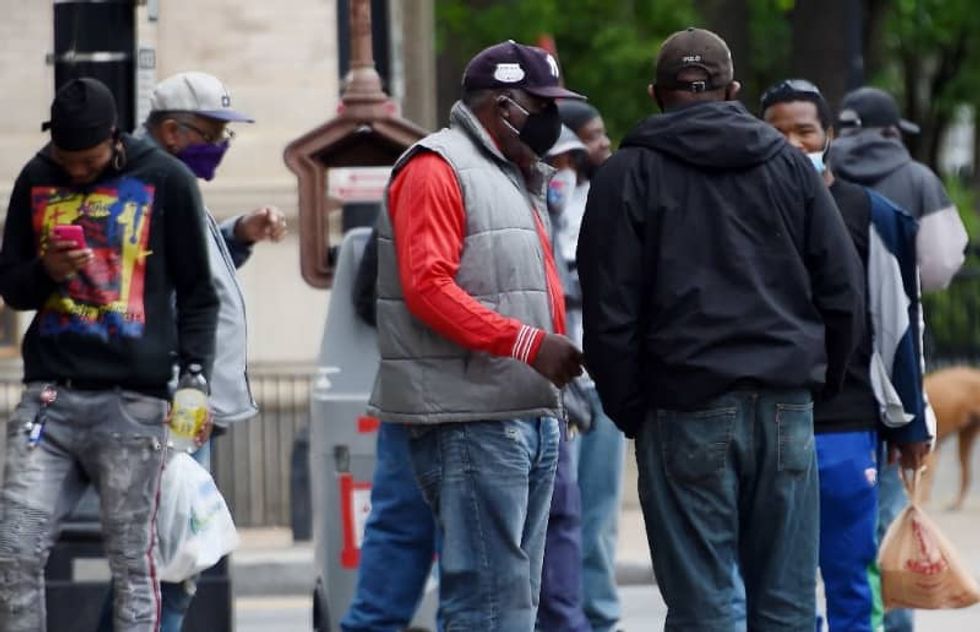 Rico Montego, 22, is out and about in Washington on his daily routine, chatting with friends on a street corner in the east of the city, despite the strict stay-at-home orders.

Compliance with the lockdown -- now in its eighth week -- has been patchy across the American capital, with concern focused on casual social gatherings in neighborhoods hardest hit by the coronavirus pandemic.

Montego lives in Trinidad, a small, ethnically-mixed residential area that has recorded over 230 cases of coronavirus, among the highest per capita in the city.

According to official data, 77 percent of the 407 deaths in Washington have been black, revealing the disproportionate toll on African-Americans as only about 46 percent of residents are black.

"It is very difficult to stay home all day with nothing to do," said Montego.

"I was working for a big security company until they stopped our shifts. They say we will go back, but I have no money coming in.

"I haven't got my stimulus check -- the system is all backed up. We are just waiting around."

A few blocks away, Barry Wright, 61, and about eight other men gathered on a sidewalk to eat lunch distributed by a local school.

"We are here every day. We all grew up nearby," he said.

The group are theoretically breaking the city's lockdown rules, and could face $5,000 fines or even 90 days in jail, but Wright said the police don't interfere.

"They know us and stop to chat, asking us if we're OK and giving us water bottles," he said.

As the United States battles to quell the pandemic that claimed more than 93,000 deaths nationwide so far, the impact has underlined Washington's sharp social and economic disparities.

The capital has boomed in recent years, but poverty, unemployment and inadequate public services remain widespread in some of its black-majority neighborhoods.

Experts say African-Americans are suffering more from COVID-19 due to higher housing density, poor health and medical care, and more often having to take public transport to work.

"This is overwhelming for a lot of people. All we can do is follow the guidance on staying under lockdown," said Brian Hamilton, pastor of the Westminster Presbyterian Church in the city's southwest.

"But many people are getting close together, many are not social distancing, and some young men don't want to wear masks.

"Some just don't have masks, others just won't do it. Groups hang around -- it does happen a lot."

Deaths from coronavirus have plateaued in recent weeks in Washington, rather than fallen as they have in former hotspots such as New York and New Orleans.

City authorities could be facing a long battle, but they may soon follow other parts of the US by easing the lockdown.

Mayor Muriel Bowser said she could unveil a phased reopening plan this week despite the emergency stay-at-home order being extended to June 8.

Recent warm spring weekends have encouraged some residents to venture outside to socialize, with some skate parks attracting large crowds, and the upcoming Memorial Day holiday is set to further test the restrictions.

Rhonda Hamilton, 43, is an advisory neighborhood commissioner -- an elected local volunteer -- who represents about 2,000 people in the Buzzard Point district next to the Anacostia River.

"People say 'we saw six or seven young people together' but I say those youngsters are like a family -- always together and drawing strength from their own peer group.

"A lot of African-American culture is based on people connecting, so people continue to check on one another, to have conversations, to make sure meals are distributed," Hamilton said.

"Social distancing has changed how we reach out to each other but, even in the midst of the pandemic, those cultural relationships and community connections continue.

"This has been a total readjustment of how we live."