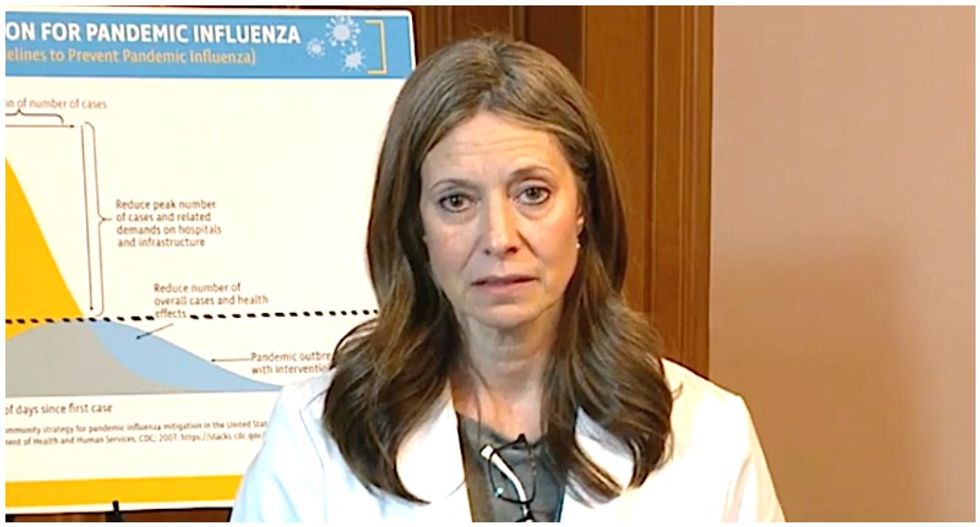 For the second time, protesters have gathered in front of the house of Ohio Department of Health director Dr. Amy Acton, with at least one of them carrying an antisemitic sign that referred to Acton's Jewish faith.

According to Cleveland Jewish News, one woman carried a sign that read, "Jewish Leaders John 7:1," which refers to a bible verse that reads, “After this, Jesus traveled around Galilee. He wanted to stay out of Judea, where the Jewish leaders were plotting his death.”

A small group of people were protesting outside Dr. Amy Acton's home again this evening, despite @GovMikeDeWine's u… https://t.co/i7I4Inee0n
— Adam Cairns (@Adam Cairns)1588633469.0

Just days before the protest, Ohio State Rep. Nino Vitale (R) took to his Facebook page and slammed Dr. Acton as a "globalist," which is a term many agree to be antisemitic in nature.

Vitale, who represents Ohio's 85th District, been a vocal critic of stay-at-home orders and of Acton and Governor Mike DeWine throughout the pandemic. On Monday, he also made headlines for saying that he doesn't wear a face mask because that's not what God intended.

James Pasch, ADL regional director in Cleveland, slammed the sign that popped up at Monday's protest.

"It is outrageous for anybody to target Dr. Acton for her faith or who she is, and anti-Semitism has no place in the state of Ohio," he told the Cleveland Jewish News. "Dr. Acton should be applauded for her hard work in trying to save the lives of Ohioans and we call out any anti-Semitic or hateful protests."