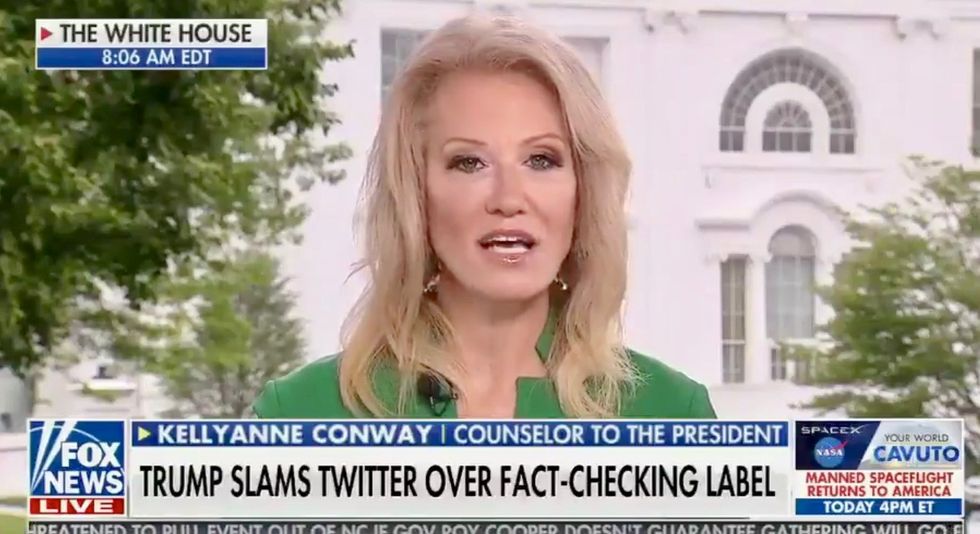 Counselor to the President Kellyanne Conway is advancing President Donald Trump's war on Twitter in a dangerous attack on the executive responsible for the fact check label placed on two of Trump's tweets Tuesday.

"He's the head of integrity and his name is Yoel Roth," Conway said on "Fox & Friends" Wednesday. Roth is actually the head of site integrity.

"Somebody in San Francisco will wake him up and tell him he's about to get more followers," she said, apparently signaling to the Trump base to attack him.

Which they did, with astonishingly ignorant, false claims.

"This guy is constantly attacking Trump voters, Trump, Mitch McConnell, you name it. And he's the head of integrity, at Twitter," she repeated, falsely. "@Yoyoel is his Twitter feed."

"Go and read what he said. 'We fly over, you know, the racist flyover country who voted for Tr –'" Conway said, interrupting herself.

"it's just horrible the way he looks at people who otherwise should have a free and clear platform on Twitter," Conway said, again telegraphing Trump's followers to go after him.

Conway is wrong about Roth's job.

And there's a clear reason Conway is targeting Roth.

"Intelligence officials have warned that Russia is interfering in the 2020 presidential campaign as it did four years ago. Back then, it used social media to spread disinformation and hoaxes. Yoel Roth is in charge of fighting these efforts on Twitter."

Roth's job description, for those who want to get technical, from his LinkedIn page:

"Yoel is the Head of Site Integrity at Twitter. He leads the teams responsible for developing and enforcing Twitter’s rules on platform manipulation, spam, and API access, as well as Twitter’s investigation and attribution efforts related to state-backed information operations. Before joining Twitter, Yoel received his PhD from the Annenberg School for Communication at the University of Pennsylvania. His research and teaching focused on the intersecting dynamics of privacy, safety, and self-expression in online dating apps."

There's another reason, too.

Roth once compared Conway to the Reich Minister of Propaganda of Nazi Germany, Joseph Goebbels.