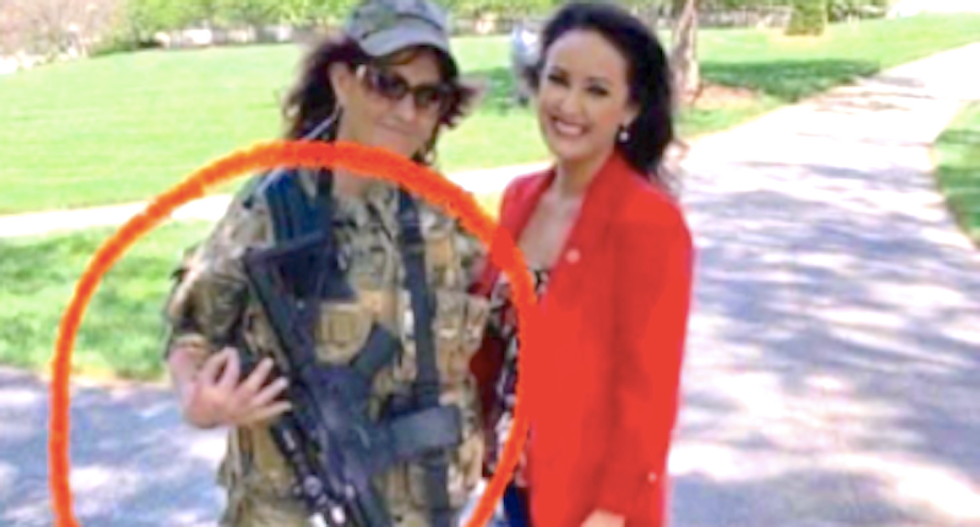 A northern Kentucky Republican was photographed next to a right-wing extremist who was making a hand gesture associated with white supremacists at a protest against the state's stay-at-home orders.

State Rep. Savannah Maddox (R-Dry Ridge) complained at Saturday's demonstration that Gov. Andy Beshear had made Kentuckians "prisoners in their own homes," and a photo taken at the protest shows her next to a rifle-toting Florida woman flashing the "OK" hand gesture that's been adopted by white supremacists, reported the Courier-Journal.

"This is sickening. Reprehensible," said former Kentucky Speaker of the House Jeff Hoover, also a Republican, who tweeted the photo. "The finger gesture means white supremacy. Are you kidding me? An elected State Representative posing for a photo with this gesture? I ask @SavannahLMaddox @KYHouseGOP @KYGOP⁩ to immediately denounce this photo."

Hoover followed up that tweet with another demanding the state's Republican Party hold back campaign funds from Maddox until she condemns the gesture -- which was promoted by 4chan users as a hoax white supremacist signal but has been used unironically by racists gunmen and anti-government extremists.

Maddox insisted a short time later that was unaware of the gesture's associations, and questioned why Hoover was aware of its meaning.

"I denounce ALL emblems of white supremacy or any symbol of cultural, ethnic, or racial marginalization without question — but I do find it interesting that you’re intimately familiar with symbols of white supremacy where I’m having to research what this gesture even means," Maddox tweeted four minutes after Hoover's post.

She also took another shot at Hoover, who stepped down as House speaker in 2018 after admitting he had settled sexual harassment claims with a Republican staffer.

"Jeff, when you were accused of making a mistake I was one of many people who insisted that the subsequent vilification of your character was premature before the facts came in," Maddox tweeted. "Sadly, you have chosen to engage in a similar tactic."

Maddox posted the photo to her Facebook page but later deleted it, according to screenshots.

She posed next to Tara Brandau, who posted the photo to her own Facebook page.

The Live Oak woman is reportedly active in the right-wing Florida Three Percenter Security Force and has ties to the neo-Confederate League of the South group.