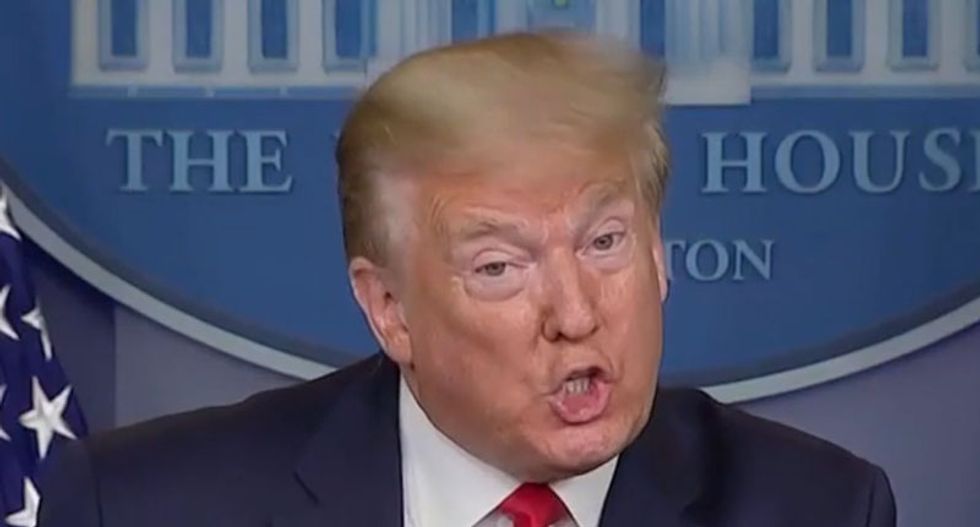 President Donald Trump's increasing attacks on election integrity have raised new alarms about his efforts to delegitimize the results in November.

Just as he did in 2016, Trump has been flinging baseless accusations of "rigged" elections and has, as president, threatened to withhold funding from Michigan and Nevada for going ahead with plans to allow voting by mail during the coronavirus pandemic, reported Politico.

"He is planting the seeds for delegitimizing the election if he loses," said Vanita Gupta, a former head of Justice Department’s civil rights division under President Barack Obama. "It’s from the playbook. It’ll get more intense as he gets more freaked out."

Trump hurled accusations of voter fraud and vote rigging during his GOP primary four years ago, especially when he lost, and set up a panel to investigate alleged election fraud after his election and blamed 2018 midterm losses on "electoral corruption."

“He’s already set the stage to say it’s rigged,” said Pete Giangreco, a veteran Democratic strategist. “This is part of the Trump autocrat playbook … There’s no way this guy’s going to win the popular vote, and it’s at least 50-50 he’s going to lose the Electoral College. So, he’s got to come up with something else.”

Trump refused to say in 2016 whether he would accept an election loss, and current and former lawmakers have recently been discussing what could be done if the president refused to accept a defeat against Joe Biden.

“It’s one of those things that I think has a very low probability, but a very high risk,” said David Skaggs, a former Democratic congressman who has discussed the scenario with other past and present representatives. “So even though I don’t think it’s likely to eventuate into some kind of intervention at the state level by the president … there’s still some chance of that, and therefore it’s wise to take it seriously.”

Skaggs remains confident that enough honorable officials remain in government to uphold their oaths, but he's concerned about pro-Trump forces outside the government.

“[There is a] militia movement out there in the country that would probably rise to arms if the president said they should," Skaggs said, "and that would be awful.”

A spokesman for Trump's re-election campaign dismissed the concerns, saying Hillary Clinton or Stacey Abrams had questioned results that went against them, but Democratic Party officials said there's only one way to ensure the president can't steal the election through lawsuits or other extraordinary measures.

"My job is to make sure he loses Wisconsin so badly that he doesn’t have an argument for sticking around that passes the smell test,” said Ben Wikler, chairman of Wisconsin's Democratic Party.