Milestones of US human spaceflights 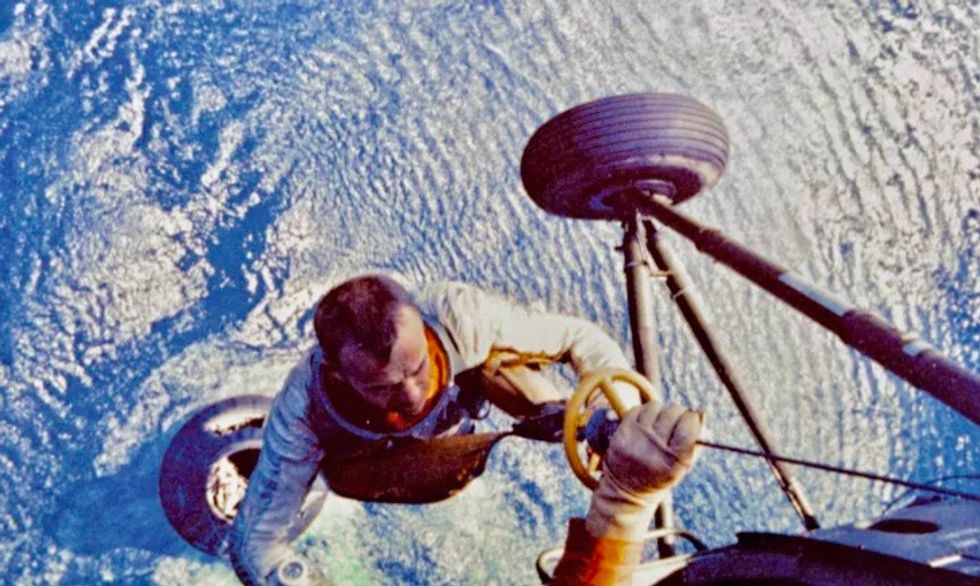 Alan Shepard, first US astronaut to travel to space, being collected by helicopter after his landing in the Atlantic Ocean on May 5, 1961 (NASA:AFP)

Here are key milestones in the history of crewed US spaceflights, which resume on May 27 with the first transport of US astronauts to the International Space Station for nine years.

On April 12, 1961, the United States is upstaged by the Soviet Union, when Russian astronaut Yuri Gagarin becomes the first man in space, completing a 108-minute orbit aboard Vostok 1.

Less than a month later, on May 5, American Alan Shepard carries out a 15-minute suborbital flight aboard Mercury, launched in 1958 by the newly-created National Aeronautics and Space Administration (NASA).

Launched from Cape Canaveral, Florida, at 09:34 am local time using a Redstone rocket, his "Freedom-7" capsule reaches an altitude of 186 kilometers (115 miles) and travels less than 500 kilometers before landing in the Atlantic.

Weeks later US President John F. Kennedy launches the Apollo program, which foresees a man on the moon by the end of the decade.

On February 20, 1962, American John Glenn completes the first three orbits of the Earth, a voyage lasting just under five hours

After six unmanned missions and four crewed outings to test equipment and manoeuvres, it is finally Apollo 11 that goes to the moon.

On July 21, 1969, at 0256 GMT, US astronauts Neil Armstrong, followed by crewmate Edwin "Buzz" Aldrin about 20 minutes later become the first men to set foot on the moon. A third astronaut, Michael Collins, remains in orbit.

"That's one small step for man, one giant leap for mankind," says Armstrong in immortal words watched on television by more than half a billion people around the world.

Five other Apollo missions follow, taking 10 other men to the moon before the program is ended in December 1972.

In 1972, President Richard Nixon decides to launch the US space shuttle program, with the maiden voyage of the Columbia, the first reusable crewed spacecraft, taking place on April 12, 1981.

It is followed later by Challenger, Discovery, Atlantis and Endeavour. In June 1983 Sally Ride becomes the first American woman to be sent into space, on Challenger.

During the 25th flight on January 28, 1986, the Challenger shuttle explodes 73 seconds after liftoff, killing all seven astronauts, as television viewers around the world look on.

Flights resume in September 1988, with Discovery.

The American shuttles' missions become more important with the deployment in 1990 of the Hubble space telescope and the start of construction of the International Space Station (ISS), in 1998, at a cost of $100 billion, largely financed by the United States.

In 2004, President George W. Bush decides to end the shuttle program in 2010, thus giving time to finish construction of the ISS. Discovery, Endeavour and Atlantis are the last orbiters remaining in service.

The last flight takes place in late June 2011, after 30 years in service.

NASA has since depended entirely on Russia's Soyuz to take astronauts to space.

In February 2010, President Barack Obama scraps plans under the Constellation program to return Americans to the moon.

He announces the goal of putting astronauts in orbit of Mars towards 2035 and developing commercial shuttles to transport American astronauts to the ISS.

His successor Donald Trump has ordered NASA to return to the moon by 2024 and to prepare missions to Mars.