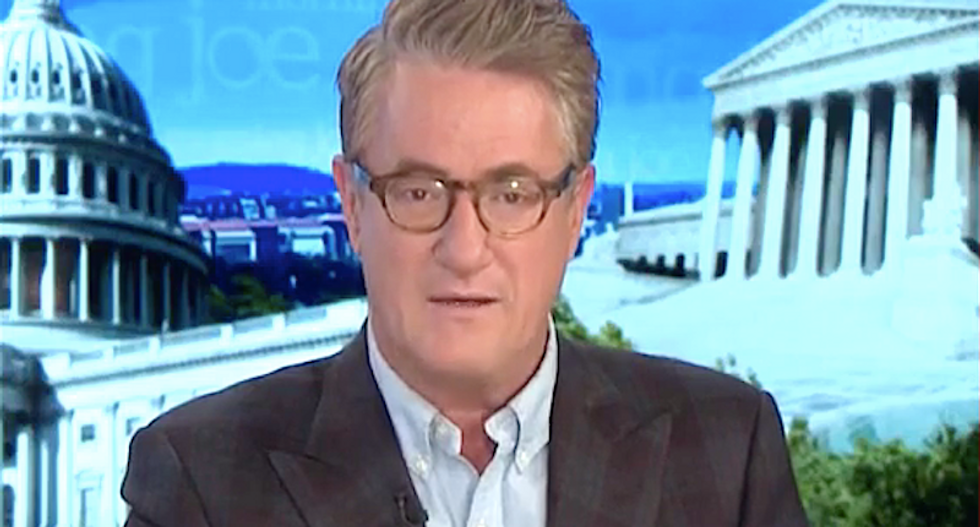 The "Morning Joe" host has speculated about the president's mental state since early in his administration, but he said Trump's behavior was only getting worse as the country faced a deadly pandemic.

"If you want to know how erratic this president is, his thinking, how he's acting in a way that shows he's unmoored from reality," Scarborough said. "Yes, of course, he's going around and not wearing a mask when everybody's supposed to be wearing a masks, that's a small thing. But think about the fact that he sets out guidelines that the doctors help put together, and then he immediately tries to get people to break his own guidelines, and he's talking about stopping the coronavirus task force at a time when deaths go over 70,000."

The Centers for Disease Control warned the White House this week that the number of daily deaths would double by June 1, but Trump is ready to wind down the COVID-19 task force and reopen the economy.

"I saw the New York Daily News conservative S.E. Cupp wrote that the president is not well," Scarborough said. "Reading from her piece, she said if this were your child, you'd intervene as quickly as you could -- and you would, getting them the help they clearly needed. Likewise, if your friend were acting this way, you might suggest they go see a therapist to work through some of their anger issues. If this were your co-worker you'd probably, I think that's actually gracious, you would alert someone in human resources."

Cupp wrote that the president continues to spiral out of control two weeks after suggesting that injecting disinfectants might kill the virus, and he's proven himself "utterly incapable of staying focused on the biggest crisis a president can face."

Since then, Trump has compared himself to Abraham Lincoln, attacked Scarborough online, lied about a letter of apology from Joe Biden, rudely lashed out at women reporters and cable news hosts, dashed off a screed against a devastating political ad, and insulted White House aide Kellyanne Conway's husband.

"Now we're up to 70,000 deaths, the president's disbanding the coronavirus task force, and he's actually pressuring governors and business owners to actually not follow his own guidelines," Scarborough added, "and now he's freaking out about an ad that Republicans did, a Baptist, a Christian who's voted Republican his entire life, Ben Howe, who helped put this ad together with some people, a bunch of Republicans concerned about how Donald Trump is handling this pandemic, and this is what's freaking him out so much."