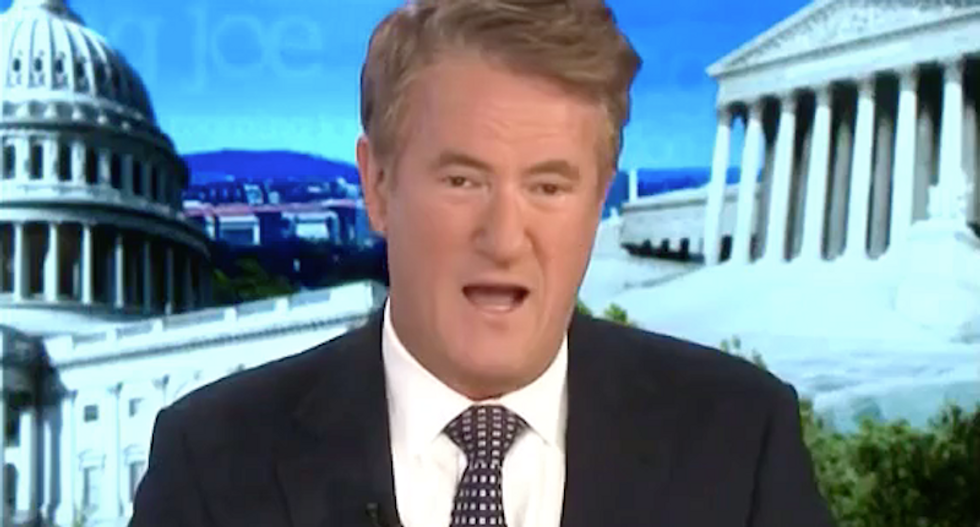 The president started by claiming the virus would disappear on its own, but his projections have shifted as the death toll mounts -- and the "Morning Joe" host said Trump still didn't have a strategy for managing the crisis.

"He, again, said it was going to be zero, it was 11 to zero, 15 to five," Scarborough said. "Then he said it was going to magically go away in April, when things warmed up, it'd be gone in April. Then, of course, more Americans died in April of this pandemic that the president said wasn't going to affect us. [He] said the media is, yeah, overhyping it, it's a hoax."

Scarborough called out the president for ignoring his administration's own guidelines.

"It is very telling that the president of the United States, as he rushes headlong into reopening as much of the country as he can, going against his own White House guidelines, the guidelines he announced," Scarborough said. "It's worth noting, before you go headfirst into a situation that could cause you a lot of pain and misery, and possibly even death, just stop for a minute and think, wait a second."

"In the past two weeks since Donald Trump said this death toll was going to be 50,000 or 60,000, while he's been rushing to go past his own guidelines, to ignore his own doctors, that the death toll has spiraled so badly, that now he's saying, instead of 50,000 or 60,000 dying just two weeks ago, we're up to possibly 100,000 dying in the United States of America," Scarborough continued. "We'll be over 70,000 by tomorrow. Chances are good we'll be up by 80,000 by the end of the week or the beginning of next week. It could go faster than that. While infections are slowing down in New York City, guess what? They're going up in other parts of the country."

"So this wishful thinking -- and I'm just shocked by the president's wishful thinking, and I'm very concerned for those people who are ignorant of science and medicine, who are listening to Donald Trump and actually believing him," Scarborough added. "People are dying. They're dying because, well, because of these rosy scenarios."

Scarborough said the president was endangering Americans by continuing to ignore the science of the pandemic.

"It's not just the president doing it now," he said. "The president is actually lying to you about the fall, saying, 'Oh, it's never going to come back in the fall.' His doctors have to keep correcting him. That's where we are as the week starts, the president continuing to get this wrong."

"That's why the polls that are coming out are all bad news for him," Scarborough added. "I know that drives him crazy, makes him do even crazier things. It makes him talk about disinfectants being injected, makes him talk about lights being disinfected, makes him say stupid things about Abraham Lincoln and insult George W. Bush, when the president is trying to bring us together. Donald Trump is down 43 percent to 49 percent to Joe Biden. you look at a Dallas Morning News poll, unbelievable, in Texas, the Dallas Morning News has Donald Trump and Joe Biden tied."