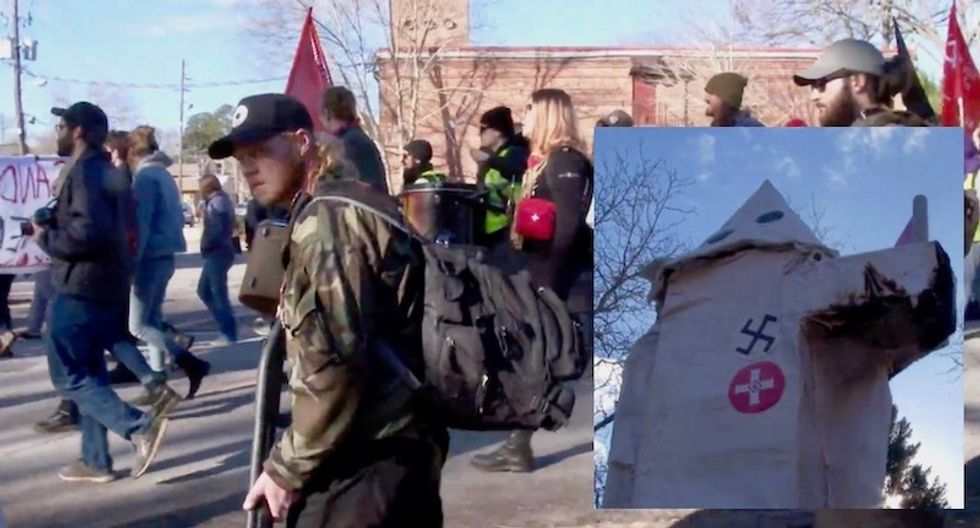 The White House had no intention of actually doing anything with protesters the right-wing refers to as Antifa -- a shorter nickname for "anti-fascism," those who protest Nazis and white supremacists.

Axios reported Sunday that it took 24 hours from President Donald Trump to see comments from conservative pal Dan Bongino urging action. It wasn't long after that; Trump tweeted that he would declare Antifa a terrorist group.

Associated Press reporter Jonathan Lemire explained on MSNBC the same sentiment, that Antifa isn't actually a group or an organization, it's a belief against fascism.

He explained this is more of the Trump playbook, where the president doesn't have any real answers, so he decides to fight against an enemy. If he doesn't have one, he makes one.

"The president really only has the one playbook," he explained. "Every crisis he's encountered including his own making, Russia, Ukraine, the impeachment inquiry, this is what he does. He doesn't try to unite. He fights, he tries to divide. He plays to his base. He puts out incendiary tweets and divisive messages. We're seeing that again here. It is obviously entirely too early to know how this will play out politically, and then for most people, that's not really the point right now. Cities are burning. People are suffering. But in the days ahead, the president will continue to stoke those grievances as a safe bet, we will see if those poll numbers change or not. This is a tight race. Joe Biden is ahead overall, but it's close. We've got a long way to go."