'Obvious our president is beyond incompetent': Chorus of ridicule after Trump brags of new 'super-duper missile' 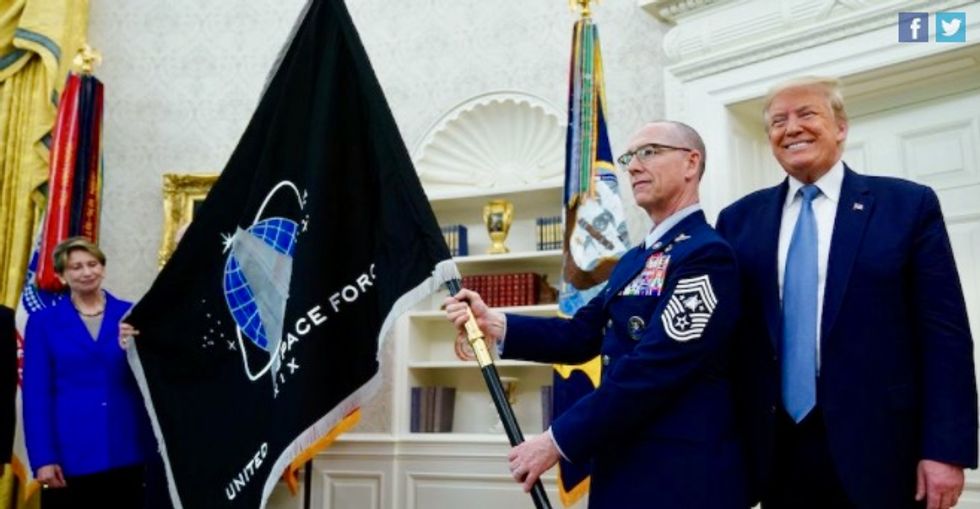 "An actual quote by the sitting president of the United States."

President Donald Trump on Friday afternoon said the U.S. military is developing a "super duper missile" that can go 17 times faster than any existing rocket, earning him ridicule from critics.

"We have, I call it, the super duper missile," said Trump. "And I heard the other night—17 times faster than what they have right now, when you take the fastest missile we have right now."

Trump made the remarks at a press conference unveiling the official Space Force flag in the Oval Office.

Breaking Defense reporter Paul McLeary said on Twitter that he had not yet received confirmation from sources at the Pentagon indicating any knowledge of what the president was talking about.

So far two DoD officials who would likely know about this sort of thing have told me they have no idea what the pre… https://t.co/VJ2i2lnmvz
— paul mcleary (@paul mcleary) 1589571512.0

Nick Schifrin, PBS Newshour's foreign affairs correspondent, suggested the president may have been referring to the AGM-183 Air-launched Rapid Response Weapon hypersonic missile, which was approved for purchase by the Air Force in February.

"It is obvious our president is beyond incompetent," tweeted California political activist Eric Garcia, "but how do the people who work for him not bust out laughing at his ridiculous statements."