Overwhelmed and losing, Trump is melting down in a narcissistic rage: reports 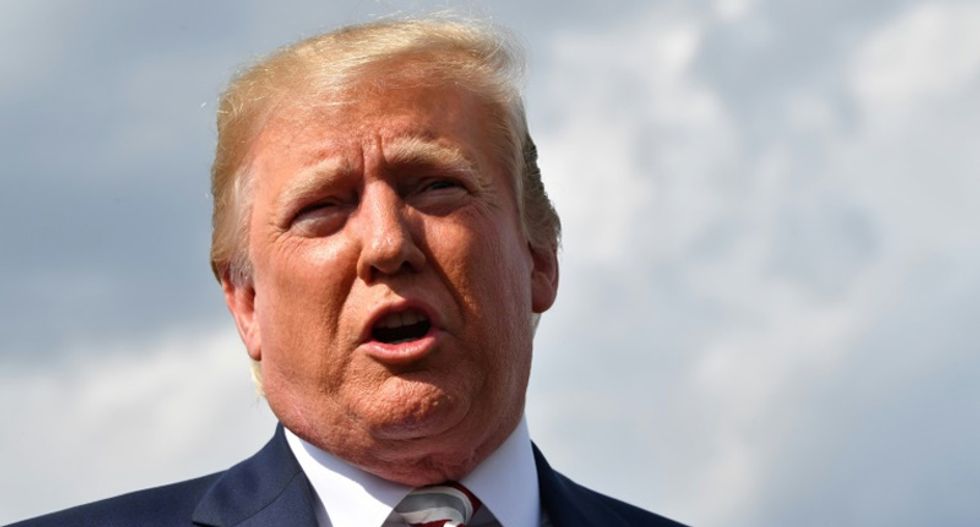 Reports of Trump flying into a rage behind closed doors--shouting at aides, turning on former allies and at one point threatening to sue his campaign manager for failing to deliver good polling numbers--have been ubiquitous over the last three years. But this past week feels qualitatively and quantitatively different, as he has fired a series of inspector generals, lashed out at the reliably sycophantic Sen. Lindsey Graham, pushed a number of snake-oil cures for Covid-19 and threatened to cut off federal funding to several states for the "crime" of sending voters applications for absentee ballots, which he insists against all evidence are rife with fraud. He's lurched between falsely bragging about the number of people we're testing for Covid-19 and saying that we're testing too many; between claiming that we'll have a vaccine by November and insisting that the pandemic will just disappear without a vaccine.

Never a stable genius at the best of times, he's really melting down before our eyes.

Part of the story is that when the Mueller report didn't sink his presidency and Senate Republicans acquitted him for a brazenly corrupt and well-documented abuse of power, it gave him a sense of impunity. Impunity always breeds more lawlessness.

Part of it is that he's cooped up in the White House, far from his adoring supporters. Politico reports that Trump's aides are trying to figure out how to get him back to his rallies, "mindful of the president’s tendency to lash out when he’s cooped up in Washington for too long and deprived of opportunities to connect with his ultra-loyal fans." But the report also highlights a bigger reason why Trump seems to be throwing more frequent tantrums--and has been less coherent--than usual:

In recent meetings with top campaign officials and White House aides, Trump has questioned why he’s avoiding campaign events if it‘s safe for him to travel in his official capacity.

Those are the words of a clinical narcissist. Trump, who travels with a large security contingent on his own regularly disinfected aircraft, has a 24-hour medical staff and never interacts with anyone who hasn't undergone a rapid antibody test, simply cannot fathom why he shouldn't hold rallies if it's safe for him to do so. He's incapable of even acknowledging that other people exist and have their own needs, and apparently it hasn't occurred to him that his cultists would be endangered if they were crammed into an arena shouting at the top of their lungs and expressing microdroplets all over each other in the process.

Trump's showing the classic hallmarks of a narcissistic injury. According to The Mayo Clinic, those suffering from narcissistic personality disorder "have an exaggerated sense of self-importance [and] a sense of entitlement" and "require constant, excessive admiration." They "expect to be recognized as superior even without achievements that warrant it." But they also "have secret feelings of insecurity, shame, vulnerability and humiliation," which makes them prone to stress and depression and leads them to "have trouble handling anything they perceive as criticism." When they do encounter negative feedback, they "become impatient or angry" and "have difficulty regulating emotions and behavior."

Trump is a masterful bullshitter and a virtuoso at working the media, but those are his only talents. He was a millionaire at age 8, and went on to bankrupt six companies. Never considered a high-end real estate developer by his New York peers, much of his business experience entailed slapping his last name on a bunch of sleazy scams and crappy products. His persona as a crafty deal-maker and savvy businessman was crafted by ghostwriters and the producers of his reality-TV show.

Try as he might--and he is trying so hard--he can't spin away 100,000 deaths or an unemployment crisis approaching Great Depression levels. His skills are worthless in this context.

And while he could certainly eke out another narrow Electoral College victory in November with adequate voter suppression and probably a criminal investigation into Joe and/or Hunter Biden contrived by Attorney General Bill Barr, he's losing badly at present.

He trails Joe Biden in RCP's average of every battleground state except North Carolina. Nationwide, CNN number-cruncher Harry Enten wrote last week that "Biden's advantage is the steadiest in a race with an incumbent running since at least 1944."

Trump is being deprived of the adulation of his MAGA fans, and while his staff is no doubt trying to shelter him, at this point he can't escape criticism for the catastrophic epidemic that his negligence caused.

He's experiencing depression and narcissistic rage, and it's only going to get worse as it becomes clear that we aren't going to see a rapid "V-shape" economic recovery and Covid-19 isn't just going to "disappear." Trump has immense power and is as dangerous as a cornered animal. It's going to be a long summer.