Pompeo -- and his wife -- on hot seat after firing of State Dept. inspector general 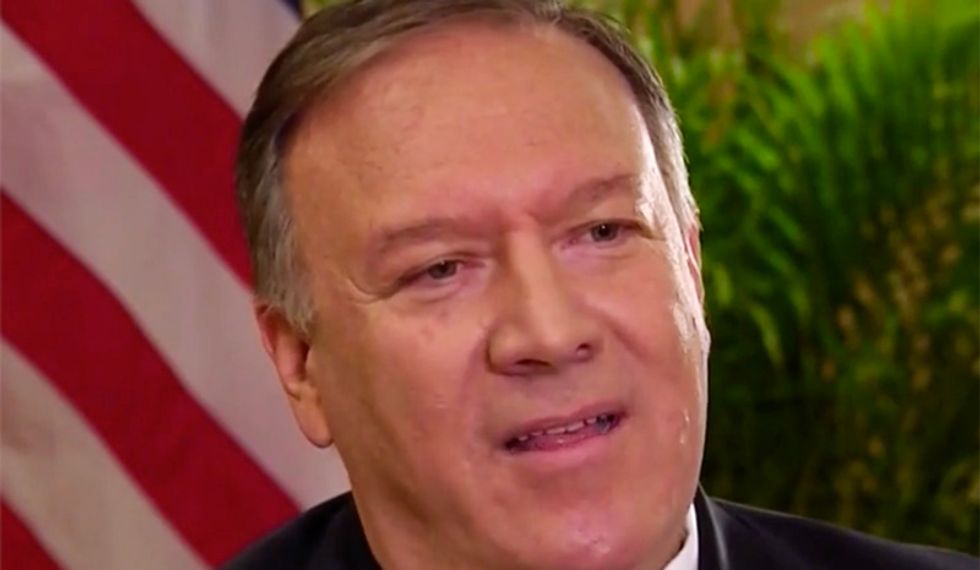 Secretary of State Mike Pompeo is suddenly under the microscope after Donald Trump announced his intention to fire Steve Linick who has been serving as the inspector general of the department, reports Politico.

At issue are reports from Democrats that Linick had just opened an investigation into Pompeo, coupled with a report that the Secretary of State requested that the president dismiss the IG -- and Trump complied.

Noting that the firing of Linick "may wind up backfiring" on Pompeo, Politico reports, "The attention comes as Pompeo is under renewed pressure from fellow Republicans to jump into the Senate race in Kansas. The ex-congressman has repeatedly disavowed interest in the seat, even as his actions have suggested he was laying the groundwork to leap into the contest, just in case. Whatever his ambitions, Pompeo’s critics say too many of his actions as America’s chief diplomat seem designed to bolster his domestic standing with the GOP base."

According to the report, "State’s inspector general, Steve Linick, had been investigating allegations involving Pompeo, New York’s Eliot Engel, the Democratic chairman of the House Foreign Affairs Committee, said following news of Linick’s ouster. A congressional aide added that Pompeo and his wife are accused of improperly directing a political appointee to run personal errands for them."

Politico reports that the news that something might be up with Pompeo did not come as a surprise to some State Department employees, who "have quietly voiced concerns for many months about Susan Pompeo’s role at the State Department. They note, for instance, that she occasionally travels with the secretary, requiring State Department staffers to assist her."

"Last summer, CNN reported that congressional investigators were looking into whistleblower complaints that the Pompeos had used diplomatic security agents to run errands for them, such as picking up Chinese food, their dog and their adult son," Politico's Nahal Toosi wrote. "Susan Pompeo’s unusually active role at the CIA when Pompeo was director of the spy agency — critics likened her to an unofficial 'first lady' — also drew complaints. But CIA spokespersons vigorously defended the Pompeos at the time and said Susan Pompeo had not done anything inappropriate, emphasizing that she had volunteered to help agency employees and their families."

Adding to Pompeo's problems is criticism from GOP senators including Sen. Chuck Grassley of Iowa, Sen. Susan Collins on Maine and Sen. Mitt Romney of Utah.

“The firings of multiple Inspectors General is unprecedented; doing so without good cause chills the independence essential to their purpose,” Mr. Romney said on Twitter. “It is a threat to accountable democracy and a fissure in the constitutional balance of power.”