Popular Christian novel ‘The Shack’ finds a surprising solution to the problem of evil: Polytheism

In the movie based on William Paul Young’s ‘The Shack,’ Mack (Sam Worthington), second from the left, meets the Trinity. From left to right: Jesus, the Son (Avraham Aviv Alush), Papa, God the Father (Octavia Spencer) and Sarayu, the Holy Spirit (Sumire Matsubara). (Summit Entertainment, Lionsgate)

In the United States, churches in at least four states have filed lawsuits about the banning of religious gatherings due to the coronavirus pandemic.

A prominent Virginia pastor died in April of COVID-19, after preaching that “I firmly believe that God is larger than this dreaded virus.” One church elder, struggling to make sense of the news, reminisced:

“Our bishop always told us, even as they wheeled him into the operating room, he proclaimed that God is still a healer. … I don’t know how, but I have to say: God will get the glory from this.”

Like some other congregations struck by the pandemic, the Virginia church was asking questions about the problem of suffering: why a good and powerful God, who is a “healer,” allows the pandemic’s suffering and death to take place.

These are questions that fiction has explored for years, including, perhaps most famously in recent years, William Paul Young’s evangelical bestseller The Shack. In 2017, the novel was made into a Hollywood blockbuster that grossed over US$96 million globally, starring Octavia Spencer and Sam Worthington.

The Shack investigates possible justifications for suffering and evil in the world, and how these relate with popular notions of God in the Christian tradition as all-knowing, all-powerful and good.

My current research examines how contemporary American novels — both popular evangelical and more literary fiction — treat the theological problems of suffering and evil. In a new research paper, I suggest that the massive popularity of The Shack was due to its inadvertent polytheism. Many gods, it turns out, solve the problem of evil in a way the Christian one God cannot.

In The Shack , protagonist Mack (Sam Worthington), gets the chance to question God. He wants to know why God allowed his daughter Missy to be sexually abused and murdered.

After a mysterious invitation, Mack travels to the site of the murder years before. The dilapidated shack in the snowy mountains magically turns into a beautiful summer cabin by a lake. There, Mack meets the members of the Trinity, the three divine persons in one God worshipped by Christians.

Mack spends a weekend with the Trinity, cooking, hiking and gardening as they take turns trying to “justify the ways of God to men,” to use the words of English poet John Milton.

But the divine beings strangely proliferate. Mack meets a Hispanic woman in a cave named Sophia (Greek for wisdom), played by Alice Braga.

When the time comes for God to lead Mack to his daughter’s body, the Father appears as an Indigenous man (Oneida actor Graham Greene from Six Nations of the Grand River).

What is going on with this strange proliferation of divine beings, as they take turns deflecting and diverting Mack’s questions about the problem of evil?

The answer is that Young has inadvertently rediscovered the ancient Israelite polytheism of 3,000 years ago, for the simple reason that justifying the gods’ ways to humans is an easier task than justifying God’s ways to humans. 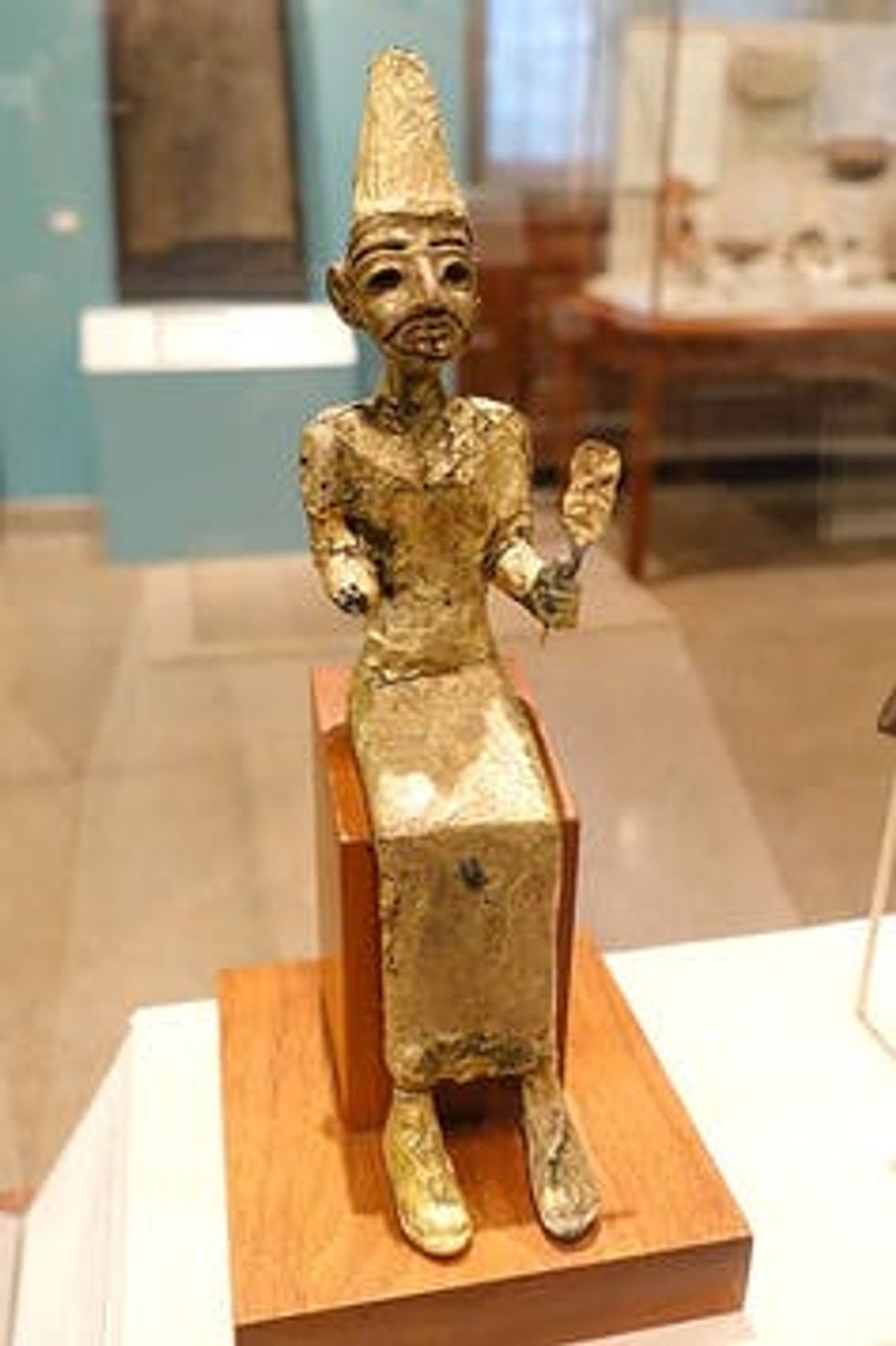 El, the Canaanite creator deity, bronze statue with gold leaf from 1400-1200 BC.

Over the past few decades, critical scholars of the Bible have come to realize that the ancient Israelites worshipped a pantheon of gods.

If this comes as a surprise to most readers of the Bible, this is understandable: The Bible was written by religious elites who, over the centuries, textually condensed the pantheon of gods into the single God of the Abrahamic religions.

A historical shift to monotheism can be traced through biblical texts: for example, what’s known as the second commandment, “You shall have no other gods before me,” from the biblical book of Exodus clearly presupposes the existence of multiple gods.

There was El, the head god of the pantheon, and his wife, Asherah. 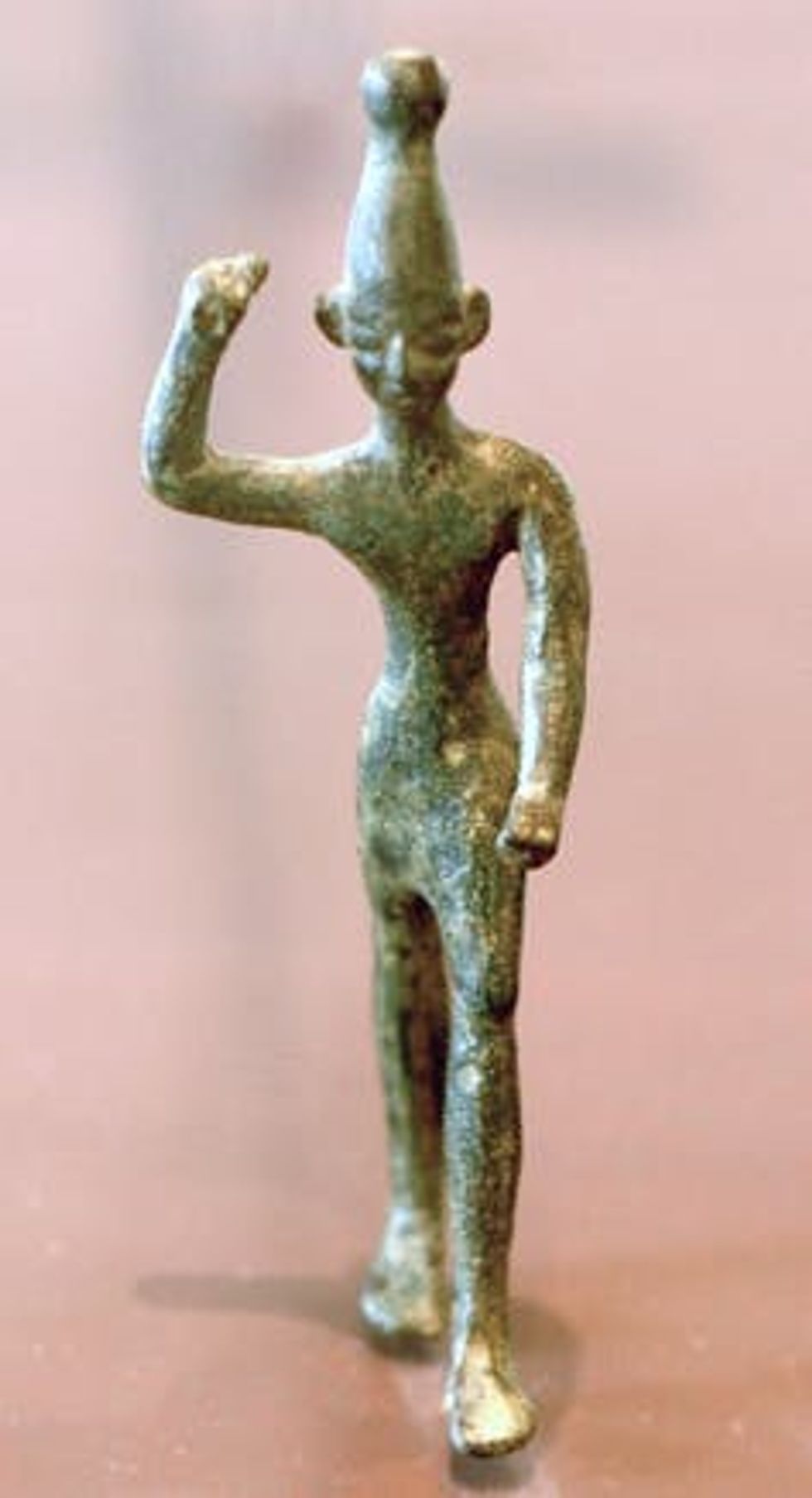 There was Baal, the storm god. They were joined by Yahweh — a name which which came to be understood in Judaism as the sacred name of God, “too holy to be uttered aloud.”

Over time Yahweh absorbed Baal’s attributes and rose to the top of the pantheon, displacing El and acquiring El’s spouse as his own.

The Biblical record, as well as archaeological and other textual evidence, suggests that as the centuries went on, the other gods were demoted to angels, or denied existence altogether, until Yahweh reigned alone.

Scholars continue to debate the historical development of this process, but it appears likely that the pantheon still existed during the time of the Israelite monarchy, even until the Babylonian exile in 586 BC.

So when the divine beings proliferate in The Shack, it is for a logical reason and a historical reason.

The historical reason is that when the other gods disappeared, they sometimes left niches that would eventually be filled with other divine beings, such as angels — or eventually the members of the Christian Trinity.

The logical reason is that it’s much easier to explain the problem of evil when there are many different divine agents, who sometimes work at cross-purposes.

Divine conflict doesn’t occur in The Shack, but the multiple divine beings work to deflect questions and divert Mack’s attention.

Papa, the Father, explains free will and the Holy Spirit talks of Adam and Eve’s “original sin” in the Garden of Eden, a state of “fallenness” believed to be borne by all their descendents. The Son emphasizes the importance of a relationship with God, and Wisdom describes human ignorance. But Mack never really gets a good answer about why innocent people suffer.

There are other literary solutions to this problem of suffering besides evangelical ones. Maybe God isn’t good, as in Cormac McCarthy’s Blood Meridian, or isn’t interested in individuals as in Carl Sagan’s Contact. But these solutions mean abandoning orthodox Christian theology.

The Shack instead stumbled accidentally upon a startling solution: recovering the ancient Israelite polytheism out of which Young’s Christian tradition grew.

It’s inadvertent because the characters don’t present themselves as polytheistic beings but rather as different faces of one God. “We are not three gods,” is the Father’s official position.

But, as I suggest in my new article, The Shack’s popularity may be due in part to the pantheon that Mack (re)discovers. Perhaps we should abandon the Father’s pretence and embrace polytheism as a theologically easier answer to the problems of evil and suffering.

One year after the fall of Kabul, many of the opposition commanders famous for their stand in Panjshir Valley remain exiled in Tajikistan. Analysts paint a picture of a weakened armed resistance against the Taliban and an Afghan population that increasingly abhors the Islamic fundamentalist group – but is too exhausted to oppose it.

When Afghanistan captured the world’s attention shortly after the Taliban’s precipitous takeover on August 15, 2021, the media focused on the Panjshir Valley – where late Afghan commander Ahmad Shah Massoud held off both the Soviets in the 1980s and the Taliban in the 1990s. As the Taliban closed in, the lionised commander’s son, Ahmad Massoud, vowed to fight the Taliban from Panjshir once again.