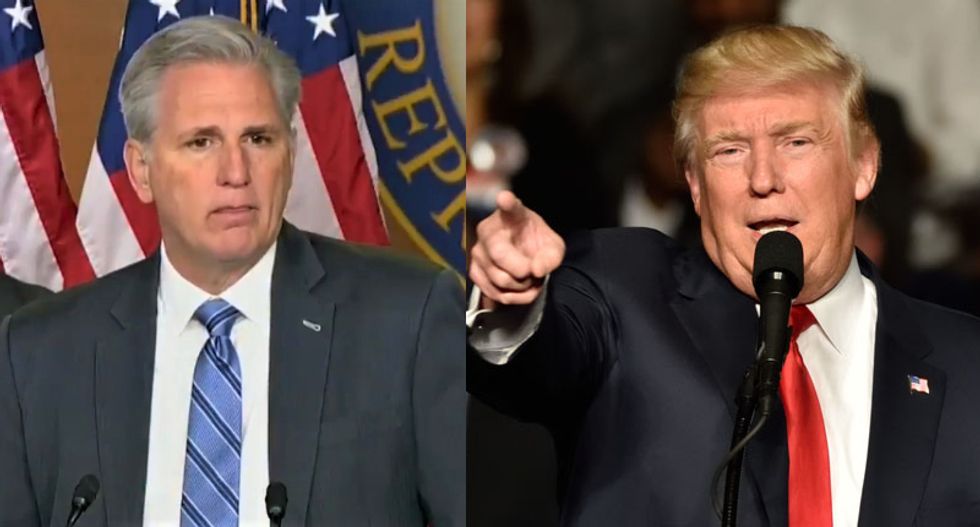 Republicans were forced into awkward positions over the week where they refused to denounce the false information President Donald Trump said, but they issued a correction.

Axios captured the laundry list of corners GOP officials were backed into beginning with masks. Trump has refused to wear a mask for unknown reasons, and many of his followers have followed suit, leading to thousands ignoring CDC-recommended precautions to reenter society as COVID-19 continues to ravage the world.

Senate Majority Leader Mitch McConnell (R-KY) refused to follow Trump's example and slapped on his own mask to protect himself.

"There should be no stigma attached to wearing a mask," said McConnell, defying Trump.

Gov. Mike DeWine (R-OH) similarly argued that wearing a mask is "about loving your fellow human being. … You are not wearing it so much for yourself as you are wearing it for that person that you will come in contact with."

Then there's the matter of Trump's conspiracy theory about MSNBC host Joe Scarborough, who Trump claims murdered an intern.

"We're in the middle of a pandemic. He's the commander in chief of this nation. And it's causing great pain to the family of the young woman who died," said House Republican Conference Chair Liz Cheney (R-WI), in response to the president's accusations. Scarborough was not at fault for the death of his staffer, according to the medical examiner. The family has begged for Trump and his allies to stop spreading misinformation as they carry their grief.

The vote by mail scandal has been another problem for the GOP as the party has long depended on vote by mail in many red states and districts. If Trump's conspiracy theory spreads, it could diminish the number of Republicans voting in November because they don't have the time and don't trust the vote by mail system.

"For over a century, Nevadans, including members of the military, citizens residing outside the state, voters in designated mailing precincts, and voters requesting absentee ballots, have been voting by mail with no evidence of election fraud," said Nevada's Republican secretary of state, Barbara Cegavske.

Even Trump's war against the World Health Organization went over like a lead balloon. Sen. Lamar Alexander (R-TN), who chairs the health committee, came out against the president's decision to pull funding from the WHO.

Once protests began in Minneapolis, Trump was quick to take to Twitter to urge police to shoot first and ask questions later. McConnell, by contrast, encouraged "our city, our state, and our country have to pull together."