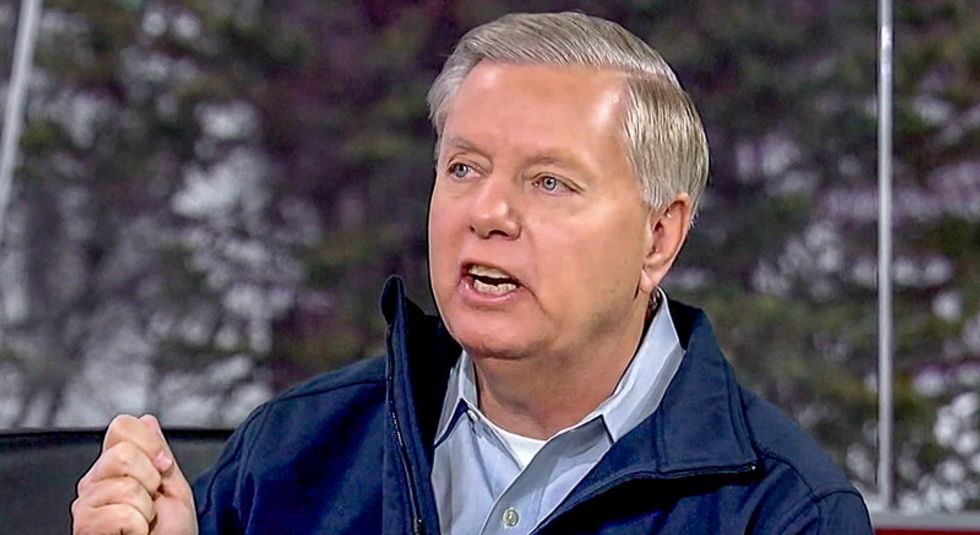 On Friday, The New York Times reported on a gathering of Republicans in Conway, South Carolina that appeared to be an "active rejection" of social distancing measures and other public health guidelines.

"The outdoor gathering here on Thursday was a send-off event for Cleo Steele, a longtime Republican Party operative in Horry County, who is retiring to Ohio," wrote Astead Herndon. "Speakers shared the same microphone. Local and state political candidates greeted voters with handshakes and squeezed tight for pictures. Of all the people gathered outside the county Republican office — many of them senior citizens — fewer than a dozen wore masks."

While the few wearing masks included support staff for Sens. Lindsey Graham and Tim Scott, the senators themselves — who were in attendance — did not.

"'Social distancing guidelines are recommended,' the invitation had said. 'Hand sanitizer and face masks will be available,'" continued the report. "In reality, according to interviews with more than a dozen attendees, the event was an active rejection of behavior that the hyper-conservative crowd has come to associate with liberal enemies in recent months — wearing masks and gloves, staying six feet away from other people, avoiding physical touch."

“You can quote me on this,” said Dwayne "Duke" Buckner, a primary challenger to Graham. “When the good Lord calls you home, a mask ain’t going to stop it.”

“We wipe our hands and take precautions,” said Michael LaPierre, another right-wing Graham challenger. “But I spent 28 months in Vietnam and crashed six times in a helicopter. I’m going to die when I’m going to die.” He added that he has no problem “pressing flesh and kissing babies.”

"State data shows that Horry County has nearly 400 confirmed cases of coronavirus, below the state’s per capita average," said the report. "Black South Carolinians, meanwhile, have contracted more than half of the state’s total cases, though they make up less than 30 percent of the state’s population. The crowd at the event was almost all white."

Most people seem to have accepted the truth about the so-called war on drugs. By that, I mean it was never about drugs. Its true target was non-white people, especially Black people. Its goal was social control. Slavery gave way to Jim Crow, which gave way to the mass incarceration of "undesirables." Illegal drugs were merely a pretext. These days, states are legalizing drugs. Some are even releasing people convicted of drug crimes. In all, we seem to be experiencing a new age of drug enlightenment.