The coronavirus pandemic exposes the truth about right-wing 'individualism' 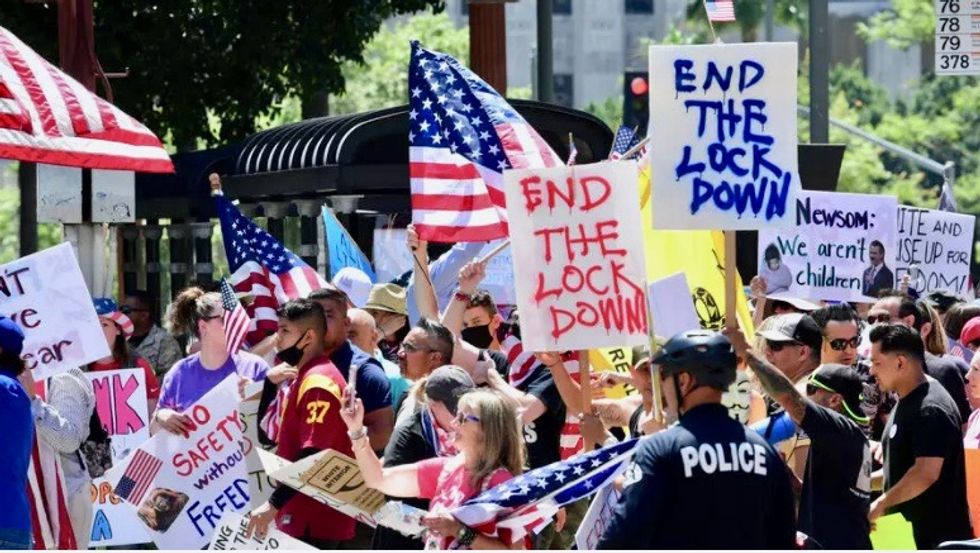 During Donald Trump's daily press conference (and, wait — wasn't he going to quit those?) on Wednesday, the president was unable to hide his irritation at coronavirus task force member Dr. Anthony Fauci, and pooh-poohed the latter's concerns about re-opening schools and universities.

Fauci had testified in front of the Senate on Tuesday and was asked about the possibility of educational institutions opening in the fall. He did not actually weigh in on this policy issue, but just observed, "Even at the top speed we're going, we don't see a vaccine playing in the ability of individuals to get to school this term." Without rigorous testing, he said, there's "a real risk that you will trigger an outbreak that you might not be able to control."

Trump, who's always furious at any hint that he actually be working at his job, and is overtly hostile to the concept of expanded testing, became visibly angry about Fauci's comments.

"I think they should open the schools, absolutely," Trump told reporters on Wednesday, while bathed in appropriately sinister lighting. "It's had very little impact on young people."

Trump reiterated the argument a few minutes later, saying this was "just not an acceptable answer" because COVID-19 "is a disease that attacks age. It attacks health." As usual, the president was barely coherent, but it appears he meant to say that the coronavirus is more dangerous for unhealthy or elderly people.

Trump got a lot of pushback, with critics pointing out that there have in fact been numerous cases of young people dying or becoming gravely ill. But that criticism misses the point to a large extent. The principal reason for shutting down schools in the first place was less about protecting young people themselves — who do appear less likely to contract COVID-19, and generally tend to recover quickly — and more about shutting down a major vector for the coronavirus' rapid spread. Even if not a single young person died from the disease, shutting down the schools was the right move so that kids can't unknowingly transmit the virus to their parents and grandparents, or other high-risk people in the community.

This moment, in other words, was another reminder that Trump doesn't even grasp the basic concept of caring about people other than yourself. In his mind, the only factor that should determine whether a student goes back to school is the personal risk to that student. It doesn't even occur to him that students might have concerns about other people's health — possibly even members of their own families.

But this problem extends beyond Trump. For decades, conservatism has preached a gospel of "individualism," disdaining the idea — which is backed by considerable scientific evidence — that humans are deeply interdependent pack animals whose survival depends more on cooperation than on individual striving. That right-wing gospel is being rapidly exposed as not but silly, but meaningless and even dangerous in the age of coronavirus.

Just a few short years ago, conservatives were in an uproar because Barack Obama gave a speech arguing, "If you were successful, somebody along the line gave you some help. Somebody helped to create this unbelievable American system that we have that allowed you to thrive. Somebody invested in roads and bridges. If you've got a business, you didn't build that."

(Obama, it should be noted, got the basic premise of the speech from Elizabeth Warren, then a Senate candidate, who gave a spontaneous speech at a meet-and-greet in 2011 making the same points.)

Mitt Romney's 2012 campaign seized on "you didn't build that," stoking anger among conservatives who love to tell themselves that their wealth is strictly a matter of their own hard work and who ignore the obvious fact that they wouldn't have gotten far without the taxpayer-funded infrastructure Obama was talking about. This is what passed for "scandal" in 2012: A Democratic politician telling a bunch of delusional conservatives something obvious, which is that individual prosperity depends on the extensive benefits of an interconnected society.

To understand how and why the vast majority of Republicans eagerly voted for Trump, a man who literally demonstrates every symptom on the sociopathy checklist, it helps to understand how much the right has morphed into a cult of individualism.

In 1987, for instance, British Prime Minister Margaret Thatcher, a major architect of contemporary right-wing thought, famously said, "There's no such thing as society. There are individual men and women and there are families."

The Tea Party protests — which were largely what Obama was responding to in 2012 — were fueled by this faith that "society" is merely an illusion and that conservatives are a bunch of rugged individuals who don't really need anyone else to survive. Certainly, in the far-right mythology, there's no need to respect the concept of a "social contract," or any obligations, such as paying one's fair share of taxes, that flows from it.

I shouldn't even have to say this, but racism has long been the not-so-secret fuel for this cult of individualism. The rise of 1964 Republican nominee Barry Goldwater, with his hostility toward federal anti-discrimination legislation and social safety-net programs, was a direct result of white people's anger at the civil rights movement's insistence that black people be included in the social contract as full equals. The Tea Party was full of people whose newfound loathing of taxation was directly proportional to their anger that a black man had become the face of the federal government.

Still, the media has taken this idea of "individualism" at face value for decades and dutifully reported right-wing anger at Obama's "you didn't build that" speech as if it were legitimate disagreement, instead of the loony rantings of people whose lives would fall apart the second there was the slightest disruption to social systems that work only because of government investment.

The coronavirus has exposed this delusion of individualism for what it is. For one thing, the virus doesn't care if you pop on a tricorner hat and declare yourself a rugged individual. It'll infect you just as easily as it infects a person who stays home, wears a mask and pays their taxes without complaint. Individualism can't stop the virus — only collective action can.

But on a deeper level, the virus has exposed the incoherence of the individualist ideology. Right now, the same people who fueled the Tea Party protests, including Trump himself, are out there insisting that the lockdowns end. Why? Well ... because they miss the benefits of living in an interconnected society. They want their kids in school. They want to go to the mall or the gym or the hair salon. They want to use public spaces that are either directly funded by taxpayers or only possible because taxpayers pay for roads, utilities and other public infrastructure that make it possible to open stores, gyms and restaurants.

More to the point, the idiocy of this individualistic rhetoric is exactly the reason we can't just return to normal life. The "every man for himself" philosophy is why Republicans resisted building up the public health infrastructure that could have responded to this crisis with the kind of mass testing and tracing needed to stop the spread. Even when it was clear the virus was spreading, Trump — due to laziness, but also due to his refusal to treat public health as a serious issue — didn't do what was necessary to ramp up an emergency response.

Obama's words about how "you didn't build that" now feel less like an admonishment and more like a warning. Conservatives have rejected the idea that we're all in this together. Because of the extreme social and political negligence that provoked, they're now losing the benefits of living a society that they pretended they didn't want and didn't even notice. "Every man is an island" sounds like a romantic notion until you actually have to live that way, locked up in your house and unable to interact meaningfully with other people in public spaces. Too bad they had to ruin it for the rest of us, but that, of course, is just more proof that we're all in this together.

Gunshots were fired near an electricity facility in South Carolina, just days after attacks on utility substations knocked out service for tens of thousands of customers in North Carolina.

Duke Energy issued a statement on reports of gunfire near the Wateree Hydro Station in Ridgeway, and Kershaw County sheriff's deputies and federal agents are investigating, reported WLTX-TV.