The disastrous handling of the COVID-19 pandemic is the natural consequence of having a mentally impaired president: Yale psychiatrist 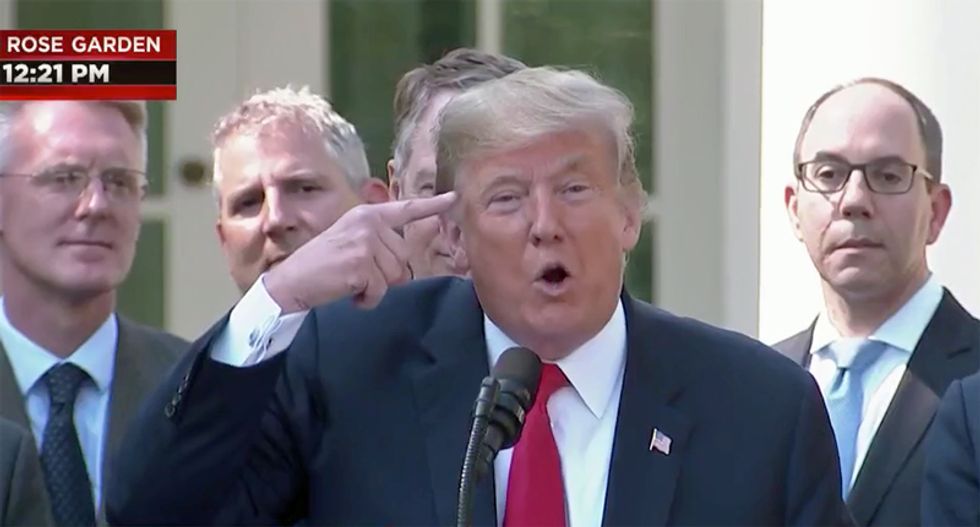 What Rick Bright publicly revealed more than anyone else is that, if we continue to push a president’s wishful narrative over medical expertise and fail to coordinate a national response, “2020 could be the darkest winter in modern history.” Mental health experts have been trying to inform the public that not even a nuclear winter could be ruled out.

Dr. Bright, a top government virologist, in testimony before the U.S. House of Representatives last week, described the very consequences we warned against. He testified that the totally disastrous handling of the pandemic has led to a level of death and tragedy, as well as to an unprecedented economic collapse, that did not have to be.

From our perspective, it is the natural consequence of having a mentally impaired president. Like a cascade, psychological disturbance in the high office progresses into social, cultural, and geopolitical dangers which, in the context of a pandemic, manifest as a dangerous inability to contain the pandemic at home and to lead a coordinated response abroad as the U.S. has traditionally done.

Psychological disturbance in the high office progresses into social, cultural, and geopolitical dangers...a level of death and tragedy, as well as to an unprecedented economic collapse, that did not have to be.

Benjamin Franklin’s axiom that “an ounce of prevention is worth a pound of cure” is apt here. In this Mental Health Awareness month, focus on the severe stresses of the pandemic and its serious mental health consequences might have been prudent. But even greater prevention is necessary and should not be neglected.

What is prevention? It is not letting problems get out of hand before beginning to think of doing something. Most problems are the product of a long process, and the better we understand the process, the earlier we can intervene.

Another way of visualizing this is the upstream-downstream model. In the imagery of a swiftly flowing river, we can picture preventive measures and health promotion happening upstream and disease and illness occurring downstream. Intervening early at the upstream level allows for the greatest possible reduction of disease and suffering for whole populations at the downstream level. Public health is sometimes called the art of preventing disease and promoting health, as it is responsible for the health and safety of populations.

Dr. Bright is a medical professional trained in infectious disease, while I am one trained in mental disease. My colleagues and I felt our own obligation to speak up, early in 2017, when the societal ramifications of not following mental health expertise became clear, just as the national consequences of not heeding pandemic expertise are becoming clear. I have been invited to meet privately with at least 50 members of the U.S. Congress, but neither any of my colleagues nor I have been able to appear before any Congressional committee, despite the efforts of our many advocates inside and outside of the Congress.

Prevention is central to the work of the U.S. Centers for Disease Control and Prevention (CDC). It has played a major, pioneering role in violence prevention, and, creating recommendations with the World Health Organization (WHO), helped 133 nations to succeed in lowering global homicide rates by 16% over 12 years. Likewise, Americans hardly remember malaria, tuberculosis, polio, and autoimmune deficiency syndrome (AIDS) being endemic in the United States because of the CDC’s work in public health promotion.

Most of my violence prevention efforts have been through public health, which involves collaborating with other disciplines and across sectors at the societal level, and not only treating violent offenders after they have become violent, as has been my work with the WHO’s Violence and Injury Prevention Department since 2002. My teaching activities at Yale Law School, like my clinical work, progressed from helping students to represent clients who were traumatized to proposing a course on preventing trauma and violence in the first place, through therapeutic uses of the law and policy.

Donald Trump’s response to the pandemic was predictable through the evidence we document in The Dangerous Case of Donald Trump but even more so from the high-quality, abundant reports by close associates under sworn testimony in Special Counsel Robert Mueller’s report. The defunding, dismantling, and disabling of the CDC, not to mention a dubious choice for its head, such that it would hardly be able to function in a crisis, are unsurprising results.

Retaliation for Speaking Out

Another consequence of mental impairment in the presidency is that truth-tellers are subject to severe retaliation, as we often see under dangerous regimes. Dr. Bright had to file a whistleblower complaint after being removed from his role for trying to push science before politics, but he is still risking his pension, his health, and his life in a heroic effort to prevent greater disaster for all Americans.

Intimidation and silencing have also befallen other key medical persons who do not subscribe to the preferred narrative, such as Dr. Anthony Fauci. The president has also ordered censorship and withholding of important CDC guidelines from the public while prohibiting the CDC from holding its own press conferences. Our experience is no different; how the American Psychiatric Association, on behalf of the Trump Administration, has used its influence and reputation to discredit and to silence any mental health professional who would speak up is an important story that has been reported on.

Consequences of having a mentally compromised president are growing ever more dire because a crisis will not disappear by wishing it away, and critical decisions are being taken in the wrong direction every day as the situation worsens and his approval ratings fall. It is not too late to halt the next cascade by choosing prevention.