Think Trump and Republicans wouldn't try to cancel an election? Look at what the GOP in Georgia just pulled off 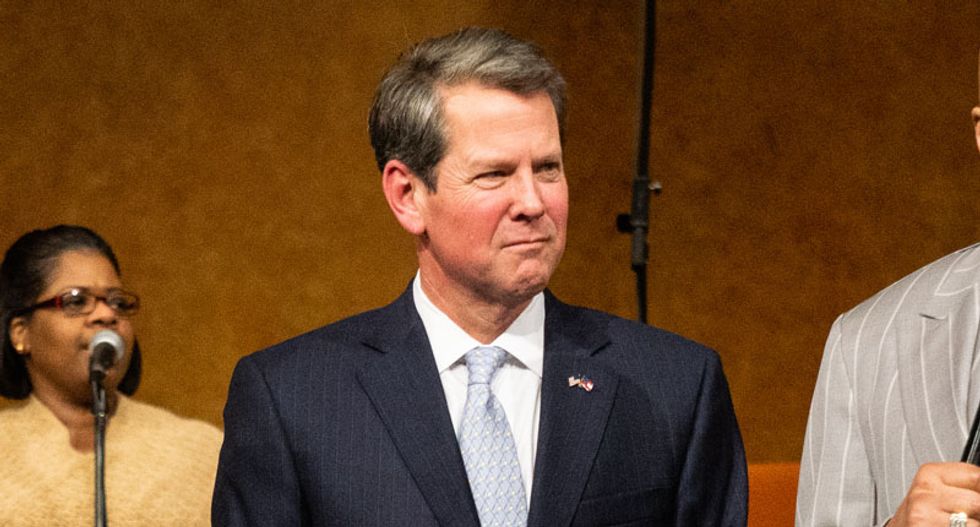 Georgia Gov. Brian Kemp will be permitted to hand-pick the state's next Supreme Court Justice after that same high court ruled last week that a special election set for Tuesday could be canceled.

Kemp and his Secretary of State, Brad Raffensberger, moved to cancel voting in the state earlier this year after state Supreme Court Justice Keith Blackwell announced he would step down after his six-year term expires at the end of 2020.

Taking the matter of who should succeed Blackwell into his own hands will allow Kemp, a Republican, to appoint another right-wing judge to serve on the highest court in the state for at least two years. Like the U.S. Supreme Court, the nine-member Georgia Supreme Court—though most of its members recused themselves from ruling on this case—enjoys a Republican majority.

Both the Democratic and Republican former lawmakers who were running for the seat—John Barrow and Beth Beskin—filed lawsuits to have the election reinstated, but the state Supreme Court sided with Kemp last week in a 6-2 vote.

Kemp narrowly won his 2018 gubernatorial race while serving as Secretary of State, a role in which he purged 53,000 mostly African-American voters from the state rolls.

Six of the state's Supreme Court justices recused themselves from the case, forcing five lower court judges to participate in handing down the ruling.

The court's decision in Barrow turns on the tension between two provisions of the Georgia Constitution. The first provides that "all Justices of the Supreme Court and the Judges of the Court of Appeals shall be elected on a nonpartisan basis for a term of six years," and that the terms of these judges "shall begin the next January 1 after their election." Because this language refers to "all Justices," it suggests that an election must be held to fill Blackwell's seat, and that whoever prevails in that election shall join the state Supreme Court on the first of January.

But a separate provision of the state constitution permits the governor to temporarily fill vacancies on the state Supreme Court, and it provides that "an appointee to an elective office shall serve until a successor is duly selected and qualified and until January 1 of the year following the next general election which is more than six months after such person's appointment."

"The second provision seems to suggest that an appointed justice may serve until January 1, 2023—and longer, if that justice eventually wins the 2022 election," wrote Millhiser.

Justice Brenda Holbert Trammell cast one of the dissenting votes, writing in her opinion that while she does not object to gubernatorial appointments overall, the people of Georgia should have retained their right to vote for their next state Supreme Court justice.

"In this instance, when the resignation will not result in a vacancy in the office until (originally) almost six months after the election, I cannot in good conscience agree that the election should be cancelled and the will of the people thrust aside as 'fruitless and nugatory,'" wrote Holbert Trammell.

As Daniel Nichanian, editor of The Appeal, tweeted, Kemp also recently acted to suspend a county race in order to retain a District Attorney position for the Republican Party.

Brian Kemp pulled the same maneuver for a key DA election, boxing out a reformer. And through a slightly less outr… https://t.co/E0dhl4xceF
— Taniel (@Taniel) 1589897892.0

When Athens-Clarke and Oconee County DA Brian Mauldin, a Democrat, announced in February that he would not seek another term, Mauldin asked the governor to appoint an interim DA "promptly" so former state lawmaker Deborah Gonzalez, who was planning to run as a progressive reformer, could run against the interim DA in November.

"Kemp, however, did no such thing," wrote Jay Willis at The Appeal last week. "By failing to act by May 3, six months before Election Day 2020, he ensured that whoever he eventually picks won't face a challenger until Election Day 2022 at the earliest. Gonzalez, the would-be reformer, will have to wait until then for a shot."

"As governor, Kemp has pivoted from hollowing out democratic elections to simply cancelling them," added Willis.