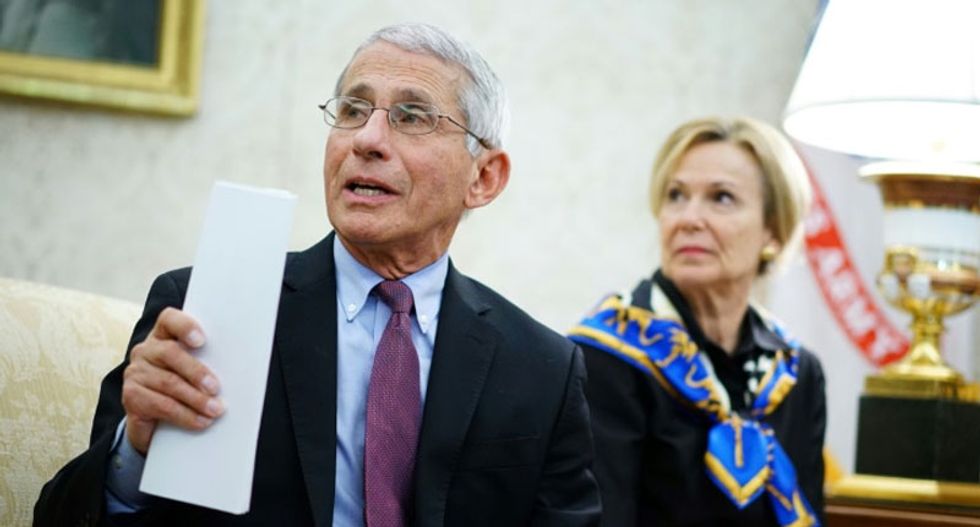 According to a report from Politico, public health officials are horrified that Donald Trump is shoving Dr. Anthony Fauci and Dr. Deborah Birx to the sidelines while the coronavirus pandemic continues to kill Americans at an alarming pace.

And all because he wants to move on to his economic message in an effort to stop his drastic slide in the polls before the November election.

According to the report from Politico's Adam Cancryn, "President Donald Trump’s oscillations over the fate of his coronavirus task force have tapped into a growing fear within the nation’s public health community: That at a critical juncture in the pandemic fight, the government’s top health experts might still be seen, but increasingly not heard."

"Though the task force is still intact, it has not held a press briefing for 13 days — the longest the public has gone without having Anthony Fauci or Deborah Birx at the White House podium since the briefings began in late February," Cancryn continued before adding, "The broader turn away from the health issues at the core of such an all-encompassing national emergency is just the latest chapter in a communications strategy that’s long confounded and frustrated public health experts."

According to Joshua Sharfstein, a public health professor at Johns Hopkins University, keeping the two doctors out of the spotlight in order to change the administration's narrative to pumping up the economy could be disastrous.

"While Birx appeared on 'Fox News Sunday' last week, neither she nor Fauci were scheduled for Sunday-morning interviews this week," the report notes. "Meanwhile, many public health experts contend that the administration has been putting its political priorities ahead of crucial health information — hampering the response at nearly every turn."

Add to that, the White House has not been forthcoming about work being done by the task force -- including shutting lawmakers out.

"Key health agencies remain relegated to the background. Some congressional requests for health officials’ testimony are being rejected," the report states. "Gone, too, is much of the administration’s transparency with Congress, where top health officials trekked to Capitol Hill throughout the crisis’ early days to brief lawmakers regularly on the response effort. That practice — which won high marks from Republicans and even many Democrats — has since devolved into mass conference calls where House and Senate members alike crowd onto the line, only to come away with few new answers."

One Democratic lawmaker, who is also a doctor, called out the White House.

“They’ll say, we don’t have the answer, we'll get back to your office — and then they won’t get back to our office,” said Rep. Kim Schrier (D-WA).

Meanwhile, another public health expert claims they are being left in the dark in regard to developments to combat the coronavirus.

“I don’t know if we’re going to have a lot of great surveillance to figure out what is working and what is not working. I think we’re going to be feeling around in the dark,” said David Hutton, a public health professor at the University of Michigan. “We don’t really know if this is seasonal or not and whether the warmer summer weather will save us.”