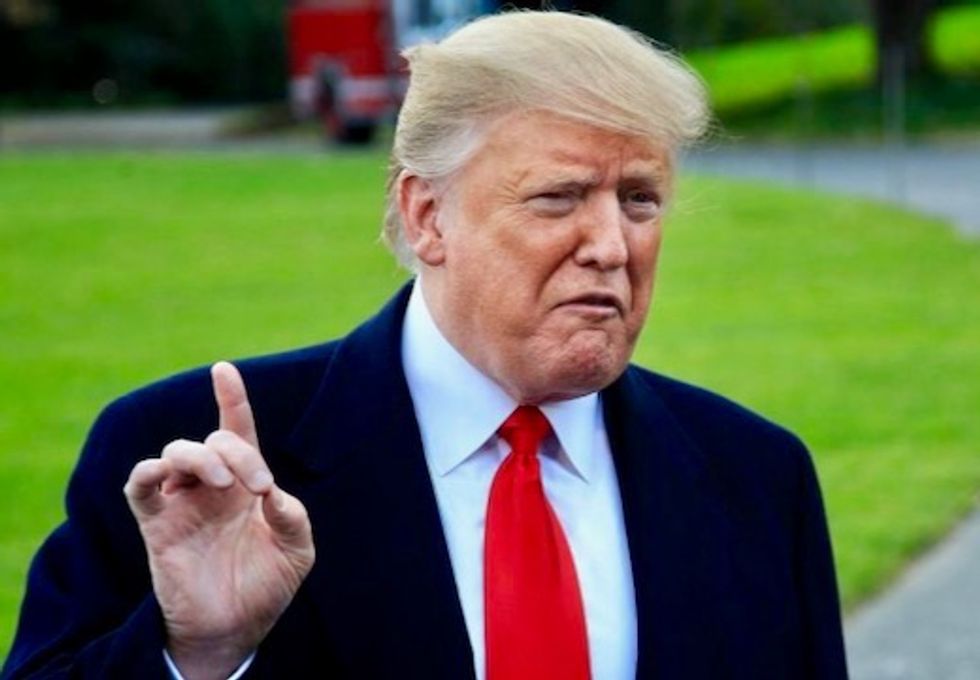 "Once again, Donald Trump's belligerent approach to foreign policy has put us all at risk."

In a move that alarmed nuclear experts, anti-war activists, and policymakers around the world, the U.S. government notified international partners on Thursday that President Donald Trump is withdrawing the country from the Treaty on Open Skies over alleged Russian violations.

"Trump and enablers are systematically undoing the systems [put] in place at end of cold war to prevent accidental conflict and escalation."

"Once again, Donald Trump's belligerent approach to foreign policy has put us all at risk," declared  Win Without War advocacy director Erica Fein, warning that the withdrawal "puts us further down the path of nuclear brinkmanship."

The Open Skies Treaty (OST), which has over 30 other party states, was signed by then-U.S. Secretary of State James Baker under President George H.W. Bush in 1992 and entered into force a decade later. The agreement aims to build trust and reduce the risk of war through unarmed aerial surveillance over territories of all participants.

"Effective six months from tomorrow, the United States will no longer be a party to the treaty," U.S. Secretary of State Mike Pompeo said in a statement Thursday, referencing the length of the withdrawal process. "We may, however, reconsider our withdrawal should Russia return to full compliance with the treaty."

The treaty is the third major arms agreement Trump has ditched since taking office in 2017—defying concerns about the global consequences in all three instances. He bailed on the Iran nuclear deal in May 2018 and began the process of exiting the Intermediate-range Nuclear Forces (INF) Treaty with Russia in February 2019.

After reports of the OST withdrawal Thursday morning, Trump later confirmed the decision to reporters outside the White House, saying that "Russia didn't adhere to the treaty, so until they adhere we will pull out, but there's a very good chance we'll make a new agreement or do something to put that agreement back together."

The president added that "we've had a very good relationship lately with Russia and you can see that with respect to oil," and expressed his belief that exiting the multi-party treaty with push the Russian government to come to the table seeking a new arms deal. Nuclear experts, however, denounced Trump's move as irresponsible.

"It is not surprising that President Trump would pull out of yet another important treaty, because this has become a reckless pattern for his administration."

John Tierney, a former Democratic congressman who now serves as executive director of the Center for Arms Control and Non-Proliferation, said in a statement that "it is not surprising that President Trump would pull out of yet another important treaty, because this has become a reckless pattern for his administration."

"The Open Skies Treaty has built trust, provided stability, and eased tensions between the United States, Russia, and 32 other countries across the Euro-Atlantic region," Tierney added. "The transparency it provides has helped prevent miscalculations and misunderstandings that could have otherwise led to conflict. In fact, the treaty has been providing vital information to the United States and its allies following Russia's invasion of Ukraine."

"There are some compliance problems with the treaty, but experts and our allies believe they can and must be solved," he said. "President Trump should reverse this decision, recommit to working with our allies to fix issues with the Open Skies Treaty, and get rid of the staff who keep trying to wreck the global arms control and nonproliferation infrastructure in his name."

“The problems we were having with #OpenSkies did not defeat the object & purpose of the treaty. It never appeared l… https://t.co/bnKn0pv9ec
— Nukes of Hazard (@Nukes of Hazard) 1590075288.0

"The administration's effort to make a major change to our national security policy in the midst of a global health crisis is not only shortsighted, but also unconscionable," the Democratic congressional leaders said. "We urge the administration to reverse course on this reckless policy decision rather than ramming it through while our country and the entire world grapples with an unprecedented crisis."

Arms Control Association (ACA) director for disarmament and threat reduction policy Kingston Reif noted Thursday that "there is strong bipartisan support in Congress for maintaining U.S. participation in Open Skies." He called the withdrawal "a slap in the face to Congress as it violates notification requirements written into law last year."

Specifically, an ACA statement explained, "such action violates Sec. 1234 of the fiscal year 2020 National Defense Authorization Act, which requires the administration to notify Congress 120 days ahead of a U.S. notification of an intent to withdraw."

Ditching the treaty is expected to impact the Trump administration's relationships with European countries, explained Thomas Countryman, a former U.S. acting undersecretary of state for arms control and international security who now chairs ACA's board.

"A unilateral U.S. exit from Open Skies would undermine our security and that of our European allies, all of whom strongly support the treaty," he said. "It has the effect—and perhaps this is the intention—of signaling a diminished U.S. commitment to its NATO allies."

According to the Guardian:

America's European allies are keen to keep the treaty going. They have benefited from the over 1,500 overflights carried out under the OST, allowing them to observe Russian military movements, and see it as a remaining element of international cohesion and transparency.

"The writing has been on the wall for a long time," a European diplomat said, adding it was "still disappointing."

Arms experts also expressed concern about what the withdrawal signals regarding future decisions on nuclear weapons and international cooperation.

Jon Wolfsthal worked on nonproliferation and arms control at the National Security Council during the Obama administration and is now a member of the board of the Bulletin of the Atomic Scientists and a senior adviser to Global Zero, an international movement for the elimination of all nuclear weapons.

In a series of tweets Thursday that put the withdrawal from the OST into a broader context, Wolfsthal highlighted a recent Global Zero report that warned the Trump administration is "blundering toward nuclear chaos."

"Today's announcement is part of a troubling pattern," ACA executive director Daryl G. Kimball said Thursday. "The Open Skies Treaty is not the first, and may not be the last, nuclear or conflict risk reduction agreement this administration has withdrawn from without a viable strategy for replacement."

"Failure to take up Russia's offer to extend by five years the 2010 New Strategic Arms Reduction Treaty, which the administration has threatened to do, would compound the damage," Kimball warned, "and further heighten the risk of unconstrained military and nuclear competition between the United States and Russia at a time when the world can ill afford it."

Republican Rep. Liz Cheney is expected to lose her primary election for Wyoming's lone seat in Congress once held by her father, but her career in politics is unlikely to end once Tuesday's votes are counted.

“Well, look, I think today, no matter what the outcome is, is certainly the beginning of a battle that is going to continue and is going to go on,” Cheney told CBS News reporter Robert Costa.

QAnon follower who showed up armed at Philly ballot counting location found in Jan. 6 photos at the Capitol

A QAnon conspiracy theorist who was arrested when he showed up at a Philadelphia ballot counting location with guns has been spotted in footage of the Jan. 6 attack on Congress.

A South Carolina lawmaker became emotional on Tuesday after explaining that an anti-abortion law that he voted for could have resulted in the death of a young woman.

Republican state Rep. Neal Collins told South Carolina's House Judiciary Committee that he would not be voting on a ban that only has exceptions for saving the life of the mother. The bill provides no provisions for victims of rape or incest.