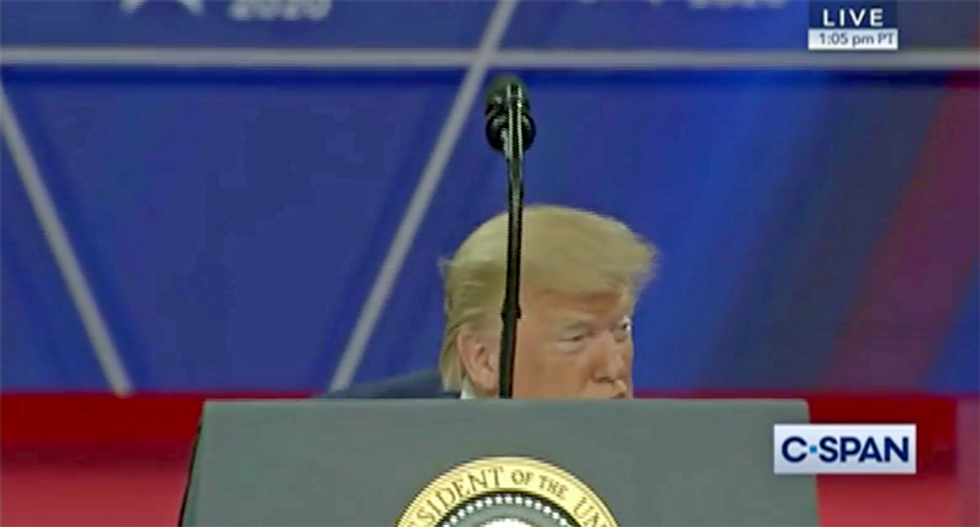 Twitter couldn't help but notice that President Donald Trump was talking tough while hiding in his underground bunker.

The New York Times reported Sunday that Trump was rushed to the underground bunker that has only been used during the Sept. 11, 2001 attacks when passenger planes were headed to Washington, D.C. Trump, by contrast, didn't experience a terrorist threat, a few hundred protesters surrounded the White House complex, which is blocked off by several fences and surrounded by Secret Service and police.

It was something that many noticed contrasted with former Vice President Joe Biden, who spent Sunday listening to the concerns from protesters on the streets of his hometown.

While Donald Trump is cowardly inciting violence from his secret service-protected White House, Joe Biden is on the… https://t.co/J7koNmmNQW
— Mrs. Krassenstein (@Mrs. Krassenstein) 1590968014.0

You can see the other comments from critics below:

While Donald Trump was hiding in a bunker, Joe Biden was marching with protesters and visiting small businesses in… https://t.co/u7C8DPcP2M
— Red (@Red) 1590969656.0

@realDonaldTrump Joe Biden is literally in the streets trying to unify the nation while Trump hides out in an under… https://t.co/heU4X838nN
— Mrs. Krassenstein (@Mrs. Krassenstein) 1590970381.0

Biden is out in the streets meeting with protesters while Trump is hiding in a bunker like Hitler during the last d… https://t.co/343Zuthw34
— Christopher Bouzy (@Christopher Bouzy) 1590968510.0

Tweeting hate from a secure underground bunker beneath The White House and surrounded by the Secret Service. What… https://t.co/GksyToxrCN
— Don Winslow (@Don Winslow) 1590971987.0

After retreating into the safety of his underground bunker, Donald Trump has taken to issuing two-word tweets as th… https://t.co/uMvcxbbuIN
— Jim Roberts (@Jim Roberts) 1590971530.0

A senior administration official has confirmed that Donald Trump was taken into an underground bunker on Friday nig… https://t.co/AL3AWlKt1m
— Amee Vanderpool (@Amee Vanderpool) 1590972438.0

Quite the contrast today: Biden risked his life during a pandemic to visit a protest. Meanwhile, Trump was evacuate… https://t.co/tgwVc7xCnB
— Yair Rosenberg (@Yair Rosenberg) 1590971643.0

The US is on fire and people are still dying in large numbers from a horrible pandemic, and Donald Trump is cowerin… https://t.co/LwAQGCEFpW
— Charles Johnson (@Charles Johnson) 1590972049.0