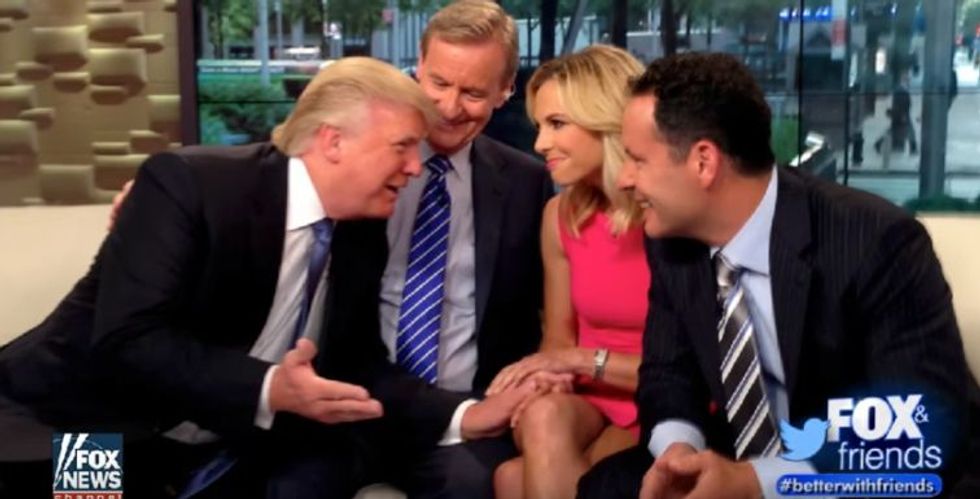 President Donald Trump has promised a vaccine by year's end, and which he may use the military to distribute -- but he once believed inoculations caused autism.

Good numbers coming out of States that are opening. America is getting its life back! Vaccine work is looking VERY… https://t.co/NUYt6yTL5g
— Donald J. Trump (@Donald J. Trump) 1589461676.0

The president was frequently asked, for some reason, for his thoughts on vaccines before his election, when he was a real estate developer and reality TV star, and he was happy to share his skepticism of scientific evidence of their safety and effectiveness, according to an analysis by the New York Times.

“When I was growing up, autism wasn’t really a factor,” Trump told the South Florida Sun-Sentinel in 2007, "and now all of a sudden, it’s an epidemic. Everybody has their theory. My theory, and I study it because I have young children, my theory is the shots. We’re giving these massive injections at one time, and I really think it does something to the children.”

At a Mar-A-Lago fundraiser at the time for the group Florida for Autism Speaks, he said that skepticism guided choices for his own family.

“What we’ve done with Barron [then 2 years old], we’ve taken him on a very slow process," Trump said. "He gets one shot at a time then we wait a few months and give him another shot, the old-fashioned way.”

Trump also raised concerns about the flu vaccine after the "swine flu" infected 42 million people around the world and killed about 12,000 Americans.

“I think the vaccines can be very dangerous," Trump told Fox News, "and, obviously, you know, a lot of people are talking about vaccines with children with respect to autism.”

Trump called in to "Fox & Friends" on Autism Awareness Day in April 2012 and again linked autism to vaccines.

“Well, it’s also very controversial to even say, but I couldn’t care less," he told the show's hosts. "I mean, I’ve seen people, where they have a perfectly healthy child, and they go for the vaccinations, and a month later the child is no longer healthy.”

“It happened to somebody that worked for me recently," he added. "I mean, they had this beautiful child, not a problem in the world, and all of a sudden, they go in, they get this monster shot — you ever see the size of it? It’s like they’re pumping in, you know it’s terrible, the amount, and they pump this into this little body, and then all of a sudden the child is different a month later, and I strongly believe that’s it.”

Trump tweeted frequently about autism's supposed link to vaccines throughout the next two years, and he raised his scientifically unfounded concerns while campaigning for president.

“If you take this little beautiful baby, and you pump," Trump said during a September 2015 debate, "I mean, it looks just like it’s meant for a horse, not for a child, and we’ve had so many instances, people that work for me, just the other day, 2 years old, 2½ years old, a child, a beautiful child, went to have the vaccine and came back, and a week later got a tremendous fever, got very, very sick, now is autistic.”

Trump told a radio host the following month that he never was vaccinate for the flu, which doctors recommend on an annual basis.

“I’ve never had one and that’s why I’ve never had the flu," Trump told "Opie With Jim Norton." "I don’t like the idea of injecting bad stuff into your body, which is basically what they do.”