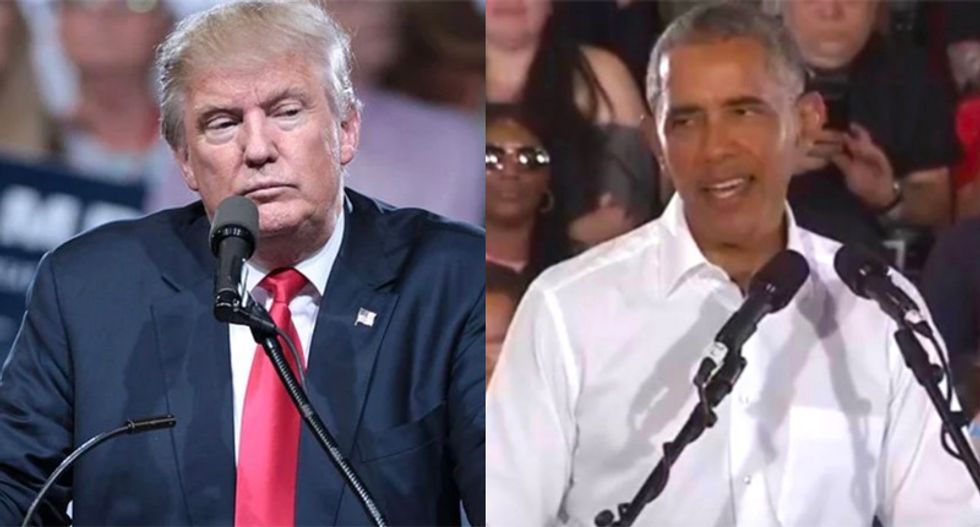 According to Washington Post columnist Eugene Robinson, Donald Trump's attempt to drag former President Barack Obama into the 2020 election fray is ill-fated and will likely blow up in his face on election day.

As of late, the president has been holding his fire on Obama Vice President Joe Biden who is the presumptive 2020 Democratic presidential nominee, using the Justice Department's attempt to dismiss the charges against former Trump adviser Michael Flynn to push an "Obamagate" conspiracy theory --including calling for the former president to be investigated.

According to Robinson, going after the extremely popular Obama is a huge mistake on Trump's part.

"President Trump’s increasingly frantic attempts to smear former president Barack Obama reek of panic. As disgusting as these efforts are, they are likely to backfire, perhaps in spectacular fashion," the columnist began.

Noting that Trump has been presented with internal polls showing him losing to Biden, Robinson stated that Trump appears to have fallen back on the strategy that helped him win in 2016 -- appealing to his follower's racism. And that means going after Obama instead of Biden who is white.

That, in turn, is likely to motivate black voters who are already solidly behind Biden.

Polls show the Republican Party in danger of losing not only the presidency but also the Senate in November, " the columnist explained. "You will recall that if Hillary Clinton had squeezed just a total of 80,000 more votes out of three Democratic strongholds — Milwaukee, Detroit and Philadelphia — she would now be campaigning for reelection and Trump would be just another Twitter troll."

"In those cities, and across the nation, African American turnout in 2016 was lower than Democrats had hoped for and expected. But there is one political figure who has demonstrated an unprecedented ability to bring black voters to the polls in tidal-wave numbers: Obama," he suggested before adding, "In 2008, Obama’s historic triumph, the rate of black voter turnout nationwide essentially equaled white turnout for the first time in history. In 2012, black turnout actually exceeded white turnout, 66.6 percent to 64.1 percent, according to an analysis by the Pew Research Center."

Writing he doesn't see "Trump’s tirades and tweets as anything resembling a strategy," Robinson said there is nothing tactical about the president's attack on Obama -- it's "personal."

"Maybe Trump just cannot abide the fact that Obama is a Nobel laureate, respected around the world, while he has had to endure being snickered at by world leaders and portrayed as hapless and ignorant by the 'fake news' media he claims to hate yet compulsively devours. Increasingly, his imagined victimizer is Obama himself. Trump even tries to blame Obama for his own administration’s botched response to a disease that did not exist when Obama was in office," he wrote before concluding, "I thought everyone knew you don’t tug on Superman’s cape. But apparently Trump still thinks you can get somewhere by spitting into the wind."

A last round of pink slips were doled out to workers hired by the Cable News Network’s short-lived streaming platform CNN+ on Wednesday, according to the Daily Beast, which reports the last 20 or so employees hired to launch the moribund project were finally cut loose. That report said a department called the Interview Club largely constituted the final round of casualties at CNN+. Some of those impacted by Wednesday’s release allegedly felt they’d been strung along since the platform shutdown in April, just weeks after its launch. The decision to nix CNN+ came in the aftermath of a massive me...