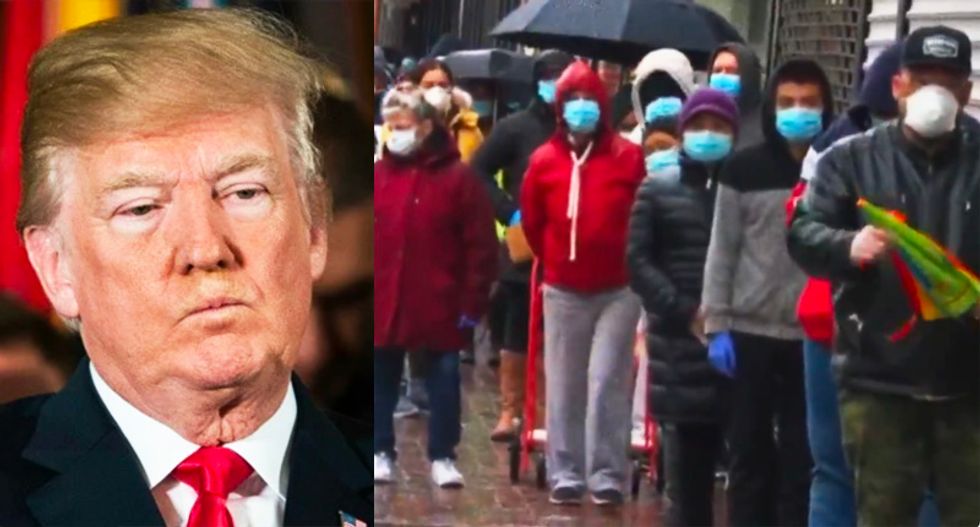 According to Washington Post columnist Greg Sargent, the widely-praised "Mourning in America" ad created by a group of conservatives who want Donald Trump out of office provoked an "unhinged" meltdown by the president that revealed they touched upon his greatest weakness.

The ad, which can be seen below, slammed Trump's response to the coronavirus pandemic that has led to almost 70,000 deaths as well as massive unemployment and the collapse of the economy before posing the question of whether there will be an America worth saving after the president gets done with it.

In response, Trump went a rage-filled Twitter binge after midnight attacking the conservatives behind the ad, which seems to prove that they touched a deeper nerve with the notoriously thin-skinned president.

"Trump raged that he is a winner, while they are 'LOSERS' who represent the GOP that Barack Obama beat in 2008 and 2012. In the 2016 primaries, Trump seethed, they 'got BADLY beaten by me, a political first timer,'" Sargent reported. "In contrast to those losers, Trump fumed, he delivered for the GOP: two Supreme Court justices and the 'biggest EVER Tax & Regulation cuts.'"

According to the columnist, "... this very boast on taxes and regulations shows why Trump’s reelection case is so weak. It’s a reminder that as president, he fully embraced GOP plutocracy and sold out on the sham economic populism that, by his own mythology, enabled him to outdo all those Republicans. He’s revealing the corrupt bargain he has since made with conservative economic elites."

"The original idea was that Trump would win reelection in spite of that enormous betrayal. He’d coast on the good economy he largely inherited, and falsely give his policies credit for it, thus obscuring their true plutocratic nature, paving the way for more plutocracy to come," he continued. "But the coronavirus has reduced those designs to smoldering ruins."

Pointing out that ad, "... depicts the extraordinary economic calamity we’re sliding into, in part because the coronavirus rampaged out of control — requiring much more stringent economic lockdowns — due to his catastrophic failures," the columnist suggested that the reality on the ground is forcing the president to alter his re-election campaign strategy.

"One irony here is Trump hoped to run his own 'Morning in America' campaign. He has constantly claimed he took over a smoldering economic hellscape and magically transformed it into a spectacular economic juggernaut," he wrote before concluding. "But it will now be harder to pull off this lie. He’ll likely be held accountable for what he’s presiding over, as presidents often are. Voters may unfavorably compare the catastrophic status quo with the end of the Obama years."