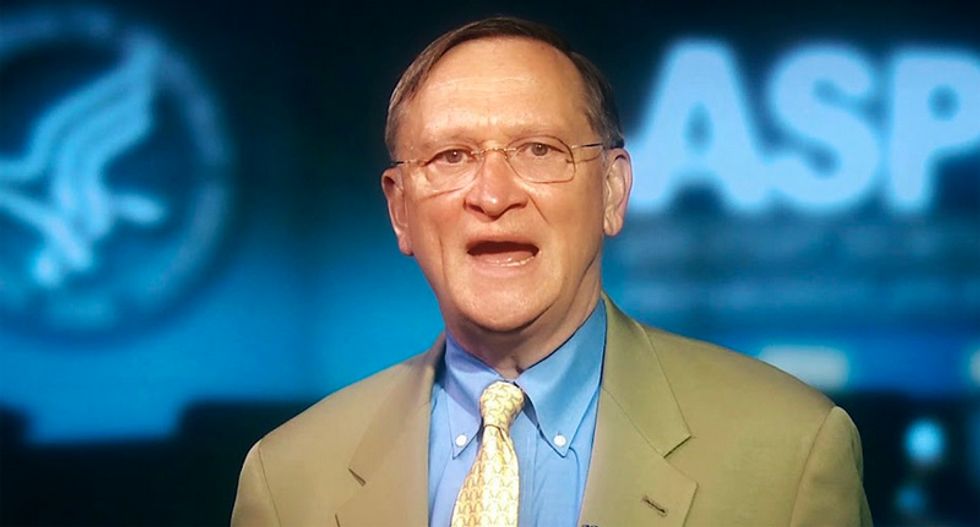 According to a deep dive into the performance of one of Donald Trump's top health officials, the Washington Post reports that Dr. Robert Kadlec, who heads the Office of the Assistant Secretary for Preparedness and Response, brushed aside worries from scientists who warned of possible emerging natural contagions.

The report states that Kaldec was more concerned with beefing up the nation’s stockpile of defenses against biological and chemical weapons at the expense of preparing for a possible pandemic.

After noting that one of Kadlec's first moves after taking over the office was to stock up on a smallpox vaccine from a company that he previously advised as a consultant -- and did not disclose on a Senate questionnaire after he was nominated -- the Post reports that the doctor was singularly focused on preparing the country for possible bioweapon attacks.

Years before he was nominated, he testified before Congress, telling lawmakers in 2011, "Quite frankly, Mother Nature is not a thinking enemy intent on inflicting grievous harm to our country, killing our citizens, undermining our government or destroying our way of life. Mother Nature doesn’t develop highly virulent organisms that are resistant to our current stockpiles of antibiotics.”

"Kadlec scaled back a long-standing interagency process for spending billions of dollars on stockpile purchases, diminishing the role of government experts and restricting decision-making to himself and a small circle of advisers, according to three former officials who spoke on the condition of anonymity to discuss sensitive matters," the Post reports before adding, "Kadlec committed additional spending to such biodefense countermeasures as smallpox and anthrax vaccines while cutting planned spending on emerging infectious diseases, despite warnings from scientists that a natural contagion could also be devastating. Citing limited resources, his office halted an Obama-era initiative to spend $35 million to build a machine that could produce 1.5 million N95 masks per day."

The Post report goes on to point out that, "Last year, a simulation organized by Kadlec’s office dubbed 'Crimson Contagion' revealed how unprepared the government was for a pandemic. An internal report on the exercise found officials would face 'cascading' funding and supply-chain shortages, including 'scarce medical countermeasures such as personal protective equipment, diagnostics, and antivirals," with a "bipartisan panel of former lawmakers and officials had urged Kadlec a year earlier to create 'a framework for combating emerging infectious diseases.'"