Tsai says China must 'coexist' with a democratic Taiwan 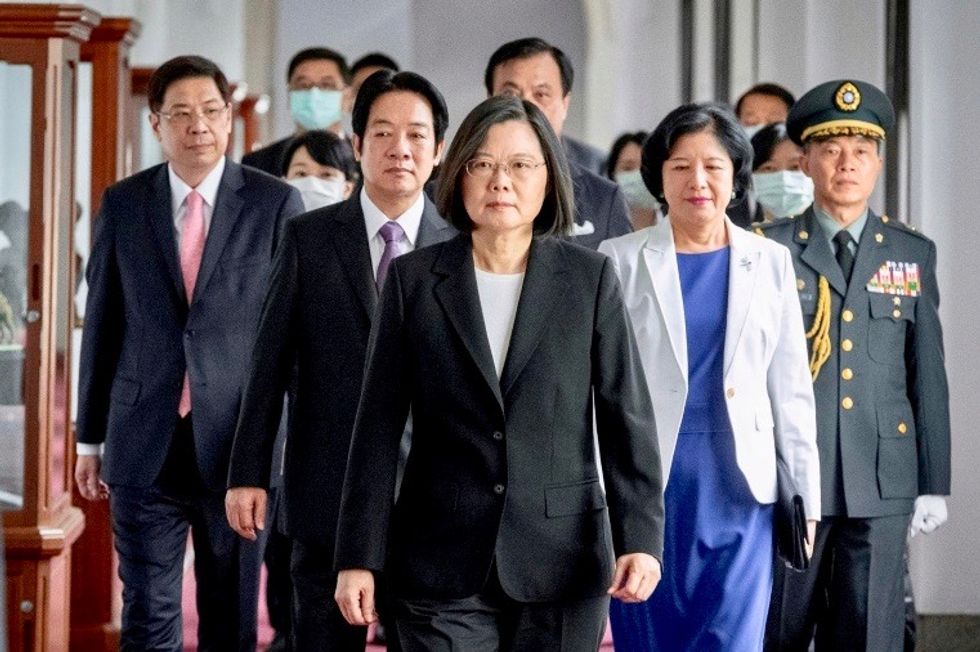 China must find a way to live peacefully alongside a democratic Taiwan, President Tsai Ing-wen said Wednesday, in an inauguration speech that drew condemnation from Beijing.

Taiwanese voters handed Tsai a second term with a landslide win in January, a vocal rebuke of China's ongoing campaign to isolate the island.

Tsai, 63, is loathed by Beijing because her party views Taiwan as a de facto sovereign state and not part of a "one China".

Since she first came to office in 2016, China has rebuffed offers of talks and ramped up economic, military and diplomatic pressure on the island.

Beijing views Taiwan as part of its territory and has vowed to seize it by force if necessary.

It envisages a "one country, two systems" model that -- like nearby Hong Kong -- would allow Taiwan to keep some freedoms while submitting to Chinese mainland rule.

But Tsai made clear during her inauguration speech that the concept was a non-starter.

"We will not accept the Beijing authorities' use of 'one country, two systems' to downgrade Taiwan and undermine the cross-strait status quo," she said.

Tsai renewed her offer of talks with Beijing and called on President Xi Jinping to work with her to lower tensions.

"Both sides have a duty to find a way to coexist over the long term and prevent the intensification of antagonism and differences," she added.

Taiwan -- officially the Republic of China -- has been ruled separately from the mainland since 1949 after the Nationalists lost a civil war to the Communists and fled to the island to set up a rival government.

For decades, Taiwan's leaders -- and many voters -- saw themselves as the true representatives for all of China, even as the vast majority of nations switched diplomatic recognition to Beijing.

But as the island moved from an autocracy to a democracy from the 1990s, a distinct Taiwanese identity has emerged with many no longer seeking any kind of reunification with China.

That has caused growing alarm in Beijing, which says any formal declaration of independence by Taiwan would cross a red line.

"We have... sufficient ability to defend national sovereignty and territorial integrity," Ma Xiaoguang, from the Taiwan Affairs Office, was quoted a saying.

Tsai's position is Taiwan does not need to declare independence because it already controls its own affairs.

Ma also criticised the interference of "external forces", a reference to the United States which diplomatically recognises Beijing but remains a military ally of Taiwan.

Secretary of State Mike Pompeo sent a message hailing Tsai for her "courage and vision in leading Taiwan's vibrant democracy" -- a rare direct message from an administration official.

While Beijing reacted with anger to Tsai's second term, analysts said her speech was in fact conciliatory.

"President Tsai has drawn clear lines and established a few non-negotiables, while making sufficient rhetorical concessions that, should it want to, the leadership in Beijing could meet her half-way," J. Michael Cole, a Taipei-based fellow with the University of Nottingham's Taiwan Studies Programme, told AFP.

"She is also assuring the US that she won't be rash and won't become a troublemaker," added Fan Shih-ping, a political scientist at National Taiwan Normal University.

Tsai's inauguration was also a chance for her to celebrate Taiwan's successful fight against the coronavirus.

Despite its close proximity and economic links with China, Taiwan has managed to contain its own outbreak to just seven deaths and has sent protection equipment aid packages around the world.

Wednesday's ceremony in Taipei was a deliberately stripped-down affair with crowds of supporters asked to stay away and dignitaries sat in chairs 1.5 metres (five feet) apart.

Beijing keeps the island locked out of the World Health Organization but the pandemic has prompted a growing list of countries to support its bid to be given access.