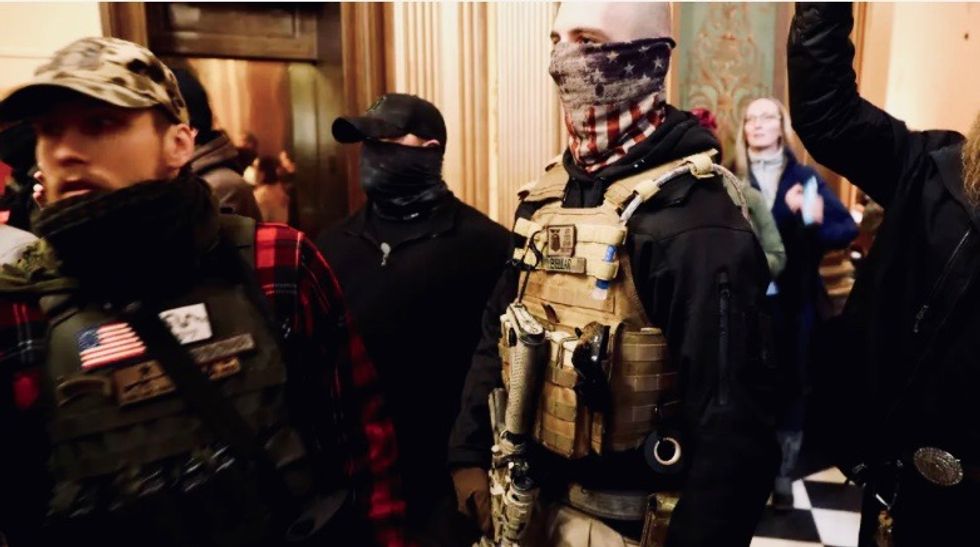 In a Memorial Day column for the Washington Post, military vet Drew Garza -- who served three tours in Iraq and Afghanistan among other deployments -- hammered anti-lockdown protesters who have appropriated a quasi-military style of dress while sometimes carrying "un-American" flags at lockdown rallies.

According to the U.S. Army vet who is now a Tillman scholar at George Washington University, protesters who adorn themselves in military-style garb while carrying high-powered weapons to protest stay-at-home orders designed to stem the spread of the coronavirus pandemic is a personal affront to those who have actually served.

Saying the protestors are wearing an amalgam of military styles not specific to any American service branch, Garza referred to it as the "Uniform" to make his point.

"I took comfort in my Army uniform. Not a physical comfort, because that certainly was never synonymous with Army-issue items, but a comfort of familiarity. I suffered in that gear, and it became a part of me. Some veterans can’t wait to take off their uniform, but I didn’t want to live without mine," he wrote. "'The Uniform' is my term for the look some protesters have adopted in recent years. It is not a specific military uniform but often a mix of non-government-issue, third-party combat gear. There are usually lots of accessories and pouches; patches of varying political rancor; and flags that are rarely red, white and blue."

Writing "To my eye, the overall look is a caricature of a Special Operations warfighter, like those in video games," he added, "The Uniform has become a fixture in political storms and crises. People in these outfits show up to political events, where they scream and scowl. They demand freedom as they wield assault rifles. They reject criticism as un-American. Some carry flags that are un-American. In a country where minorities are killed for mistaken perceptions, they protest in a protective ether of unrecognized privilege."

Explaining his "discomfort" with protesters wearing tactical gear he continued, "Those wearing it are attempting to make their appearance speak for them, sometimes without the service that normally gives power to that voice. Over our nation’s history, the sacrifice and commitment of military service have made it a source of integrity and wisdom."

"Millions of Americans have stood in uniform and watched innocent people suffer. Sometimes we could help; sometimes we were helpless. Some of us wore the same gear for weeks straight with no showers or laundry. We know the permanent coloring inflicted by months of billowing dust and sand. Uniforms get dirty — covered in hydraulic oil, mud, blood. Still, we wear them as we serve," he elaborated before stating, "Citizens have every right to be angry at government responses that are unclear, insufficient or unwarranted. Citizens have every right to protest — to speak from their personal pain. They don’t need gear to speak for them."

"When I see the Uniform engaged in protest, I understand that it is intended to convey a message," he added before concluding, "But this appearance, reappropriated in anger, rings hollow."