US military brought in to monitor police brutality protests in 7 states: leaked documents 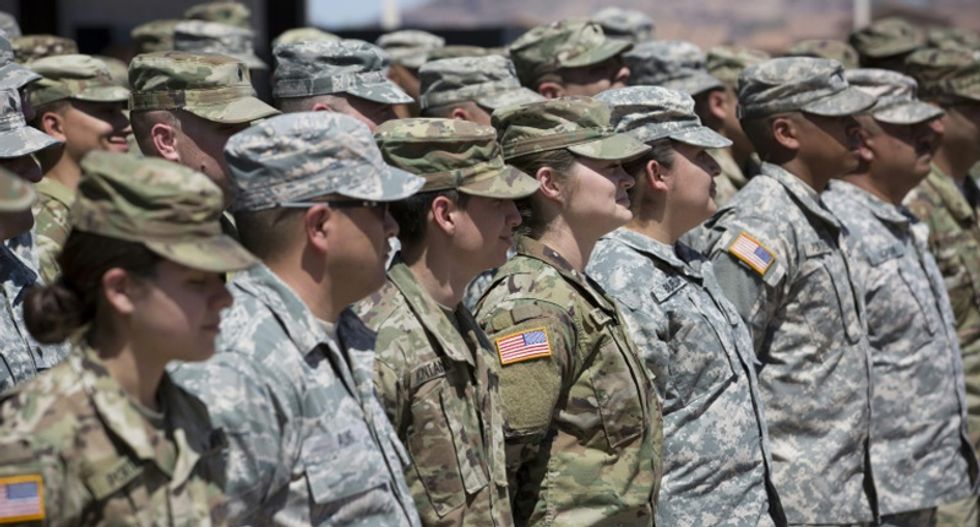 Members of the Arizona National Guard listen to instructions at the Papago Park Military Reservation in Phoenix in April. (AFP/File / Caitlin O'Hara)

According to an exclusive report from The Nation, based upon Defense Department documents, U.S. military members are being dispatched to seven different states to monitor the activities of Americans who have taken to the streets to protest the death of George Floyd at the hands of four former Minneapolis cops.

The report, by the Nation's Ken Klippenstein, notes that states include, "Minnesota, where a Minneapolis police officer killed George Floyd, the military is tracking uprisings in New York, Ohio, Colorado, Arizona, Tennessee, and Kentucky, according to a Defense Department situation report," with the author pointing out, "Notably, only Minnesota has requested National Guard support."

According to the report the documents were recently moved to a more secure "classified system."

Of note, are comments by National Guard members who claim they are ill-prepared for their new duties as the country descends into chaos over continuing police brutality.

"One document pertaining to the Minnesota National Guard, marked 'For Official Use Only' (FOUO), describes one operation’s purpose: 'Augment MN State Patrol Civil Disturbance Operations with a show of force.' Other operations are variously described as providing security for law enforcement agencies, defending the capitol building, and 'maintaining governance,'" Klippenstein wrote. "Another document about the protests in Minnesota, titled 'MNNG Civil Disturbance Response Storybook,' is also marked FOUO and dated May 29. It states that National Guard members have been authorized for 'weapon status red,' meaning magazines loaded but safety on. The document seems particularly concerned not just with harm to civilians but also potential damage to property, to which it refers several times. For example, the assessment line notes that the Guard will 'ensure the safety of citizens and property.'"

Pressed why the military is gathering intelligence within the confines of the U.S. and in the seven states, a spokesperson explained that the information would come in handy should they be called upon for support.

According to Lt. Col. Chris Mitchell, a spokesperson for the Defense Department, "Without such situational awareness, it would be more difficult for DOD to respond if it becomes necessary (if requested by the governors of those states).”

"In addition to the National Guard, Trump has reportedly considered deploying active-duty military. Benjamin Haas, a DC-based attorney with expertise in national security law who is himself a former Army intelligence officer, stressed the dangers of this course of action," the report states.

“Even if involving the active-duty military is legal and the circumstances on the ground demand further resources, it may not be wise as a matter of policy and optics. Putting soldiers into a politically charged law enforcement context is a sensitive matter, and Trump’s incendiary rhetoric has made an already tense moment even worse,” Haas explained.

According to one Minnesota Guard member, "We’re a combat unit not trained for riot control or safely handling civilians in this context. Soldiers up and down the ranks are scared about hurting someone, and leaders are worried about soldiers’ suffering liability,” before adding, "My [colleagues] are people of common sense and common decency. They may not want to step over any lines when doing their jobs, but wanting only goes so far when you’re under-trained and under-equipped.”